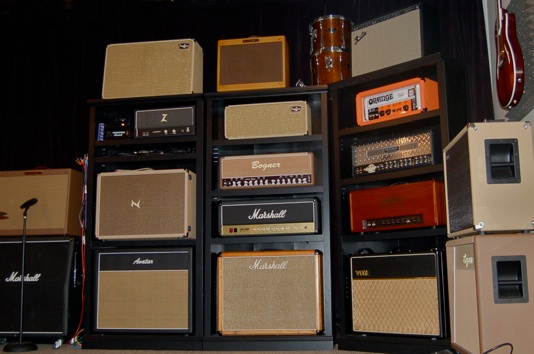 Some of us may play like rockstars and some of us only act like them, however most of us do not earn anywhere as much as them. So I’ve compiled a list of bang for the buck guitar amplifiers for everyone from the seasoned pro looking for a new toy or the newbie on a budget!

With up to 25 hours of playing time using six NiMH AA-size batteries, the 3W Micro Cube GX has been hailed as one of the best battery powered portable amplifers out there.

Other than being portable, the Micro Cube GX is also very budget friendly has many built in tones and effects and actually sounds really good considering the price and size of this thing.

It features 8 COSM guitar amp models from classic to modern, plus a special microphone preamplifier model. In addition, the Micro Cube GX provides many DSP effects such as chorus, flanger, phaser, tremolo, heavy octave, and a separate delay and reverb processor , which is basically all you need.

Personally however the real plus point of this mini amplifier is Roland’s i-CUBE LINK input. Used with any electronic device you it’s just an AUX in. but when connected with an iOS device that has the Roland Cube Jam app it allows you to practice with backtracks, record guitar parts in superb quality as well as slow down solos from your favourite songs to be learnt.

I see this in the hands of someone that travels a lot but does not want to compromise sound quality. The Micro Cube GX is simple and efficient and does it’s job well

18 amp models, 37 effects, and 24 onboard factory and user presets and a fully functional chromatic tuner, need I say more?
The Fender Mustang 1 also comes with a built in USB interface to send your guitar signal direct into your DAW in your PC, MAC or electronic device for recording purposes
But wait there’s more, the Fender FUSE software which comes with the amplifier allows you to customize the tones in your amplifier as well as download customised tones from other users on the Fender forum. It also comes with Ableton Live 8 Fender Edition included, in case you don’t have a DAW to work with

Although not battery powered, the Fender Mustang 1 is a 20W amplifier, which makes it very usable for small amps or soft practice sessions.

I see this in the hands of a guitarist who is eager to spend a bit of time figuring out softwares and DAWs to get a great sound and who enjoys experimenting with different sounds and softwares. Although not portable, the extra power will come in handy at small gigs.

If you like softwares and experimenting, go for theFender Mustang 1 $119

Built with a 12AX7 vacuum tube for true-tube, the Vox Valvetronix 20+ is a very good alternative if you’re interested in getting a tube amplifier but don’t know if you it’s your thing yet or if you simply do not have the money

Built to sound and feel like a tube amplifier, the tone cleans up as you roll off the volume and it sounds very warm. It is also able to bring the “tube” feel to all of it’s amp models and presets, which makes this a very special amplifier.

I see this particular amplifier in the hands of someone who loves the traditional tube sound. Be it rock, blues or jazz, this amplifier will please any guitar player who is already searching for the sweet sounds of a tube amplifier at a cheap price.

Although among the bigger and more powerful amplifiers on this list Blackstar has managed to make this stereo amplifier very affordable.

Built for Blackstar fans and guitars that generally enjoy high gain, The Blackstar CORE40 is equipped with Blackstar’s signature drive channels and patented ISF (Infinite Shape Feature) technology which allows to explore British and American rock or metal tones and everything in between.

Much like the Fender Mustang this amplifier also comes with a USB input which means you can record tracks into your DAW without the use of an audio interface without compromising sound quality.

However being a stereo amplifier, playing music on this amplifier is a much more enjoyable experience then with other amplifiers which makes jamming along with your favourite tracks that much more fun! Plus 40W of power means this is definitely usable for most (if not all) small gigs.

Give the Blackstar IDCore 40 a visit, though a little more expensive – $199

Having 2 channels means you not only have access to Orange’s  renowned signature overdrive tones but clean tones for other purposes as well. Pair it with pedals or a foot switch and you’re ready for a small gig!

I see this amplifier in the hands of a guitar player who already has pedals and has does not require effects or just prefers to keep their set up simple.

And that’s about it! Although there are many more fantastic budget guitar amplifiers out there I felt these were worth a mention as they would be more easily accessible.

Though not always mentioned all the guitar amplifiers in the above have a tuner, headphone jack and aux in jack, which are to me one of the most important things for a bedroom sized amplifier.

Comment below and tell me what are your favourite guitar amplifiers  (budget, boutique or anywhere in between) and why!