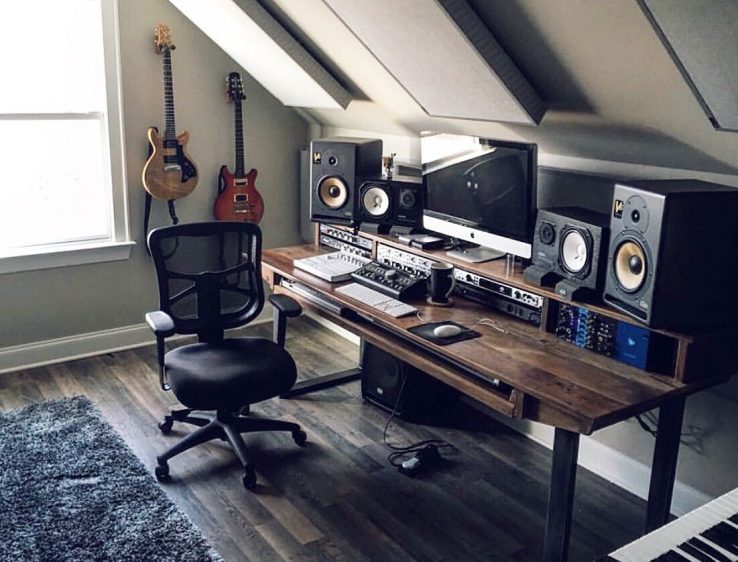 If there is one thing that you need to be able to do, as a music producer, that would be to monitor accurately.

Being able to monitor recordings and mixes accurately will determine the quality of your music. No matter how expensive your studio monitors, mixers or pre-amps are, it all doesn’t matter if your monitoring is inaccurate. Your mixes will never sound good.

For an accurate sound, you’ll need accurate flat sounding studio monitors. And your studio, the room that you record and mix in, has to also be properly sound-treated.

Many home studio owners take this very seriously. They buy the best studio monitors they can afford, spend lots of time (and money) building their studio & experiment with all sort of sound treatment for the studio. 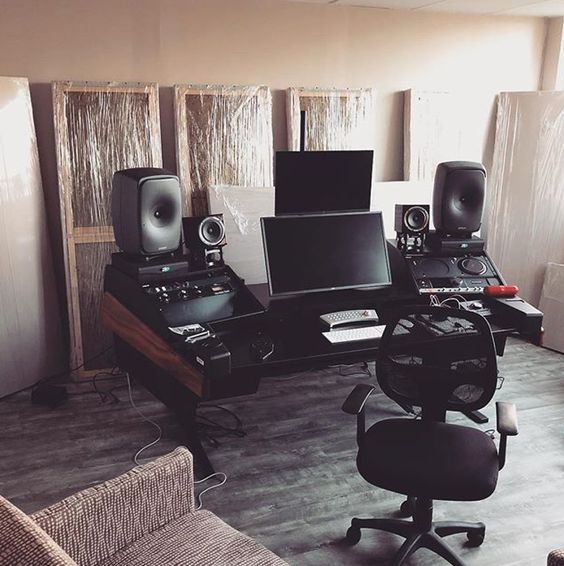 But despite all of that. Even with such elaborate setups, you see pictures of studios with setups that make no sense!

Take a look at this one: 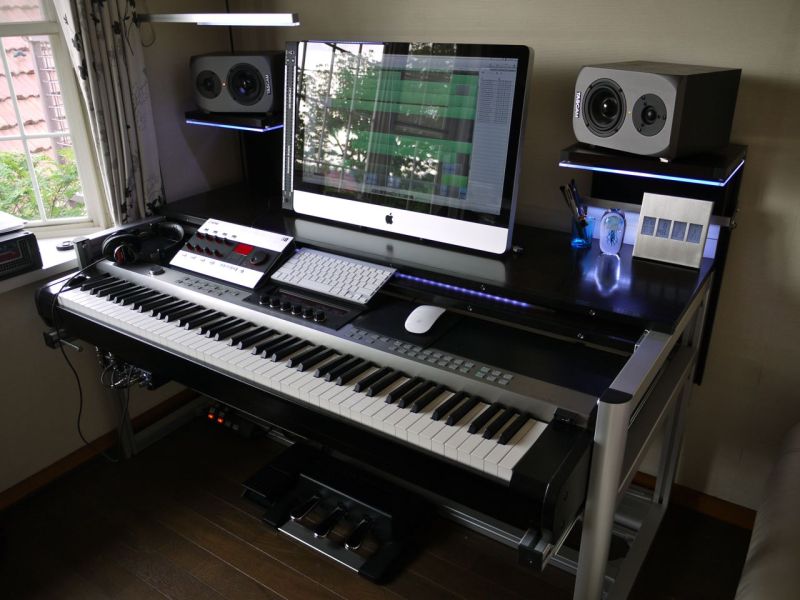 See the problem in the above picture? 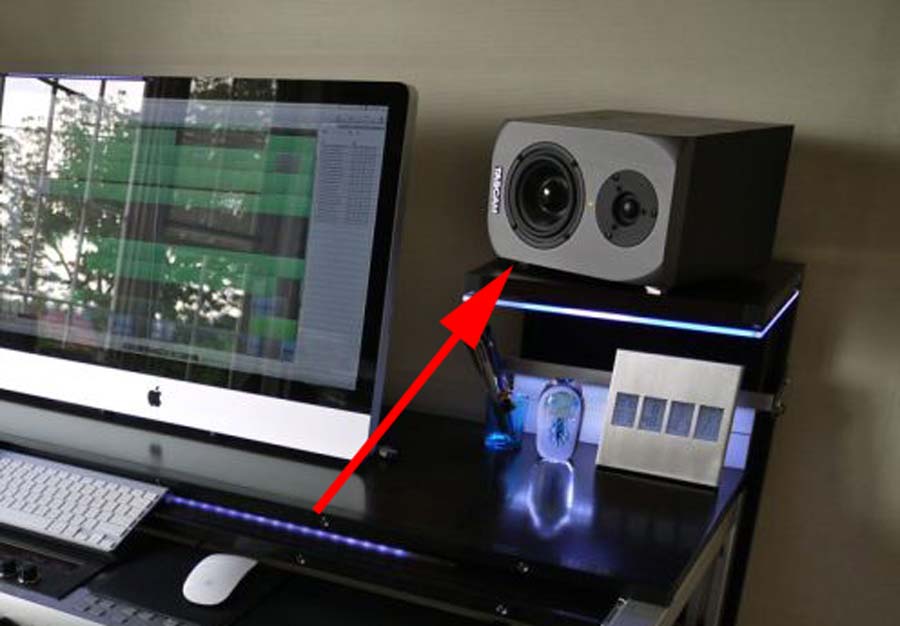 It makes no sense. Let me repeat that again. It makes NO SENSE to place studio monitors designed to sit vertically, on its sides.

In this post, I’ll want to show you the best practices when it comes to optimizing your studio monitor placements in the studio

Back then, I was no different. I thought I was brilliantly saving space on my studio desk, by stacking a pair of studio monitors on top a horizontally placed pair.

If you have a pair of vertically designed studio monitors in your studio, sitting on its sides. Stop reading this article and fix its placement.

Here’s the problem with putting studio monitors (unless they’re designed to be placed that way), on its side.

When speakers are placed horizontally, the tweeters and woofers would be side by side. Both the tweeter and woofer will produce sound lobes, which are slightly offset in time from each other.

And as you move horizontally, left to right, you’ll be crossing through separate sound lobes which will then give you different sound perception and sometimes even sound phasing, due to a phenomenon called comb filtering. 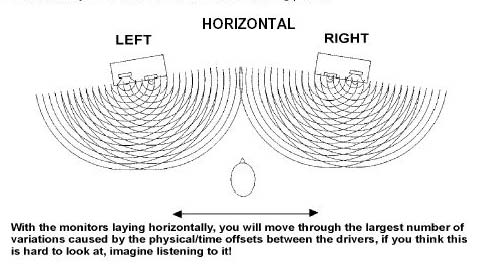 The only speakers that should be placed horizontally are the ones that are built for that purpose.

If you look at speakers are designed for side placement, you’ll see that the tweeters are usually built slightly off-center from the woofer, to eliminate the sound phase problems. 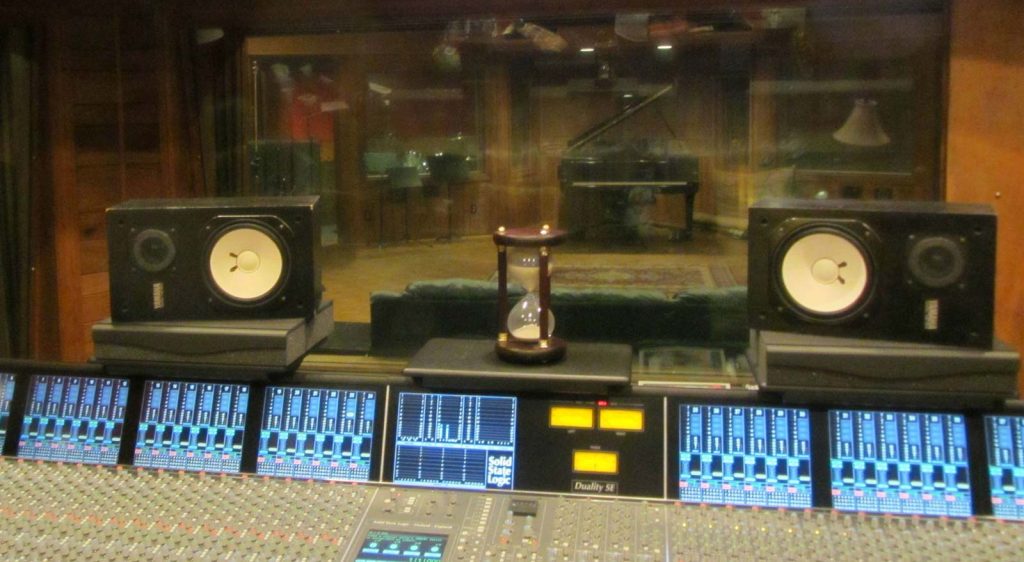 Pictured above is the Yamaha NS10, a legendary studio monitor (actually initially built as a hi-fi speaker) that sits horizontally on many great recording studios around the world.

One way to ensure bad monitoring position? Place your speakers too low or too high from your ears.

Your studio monitors, produce sound in a directional manner. And even more for the tweeters, as high frequencies travel more directionally compared to lower frequencies.

Do this listening experiment with your studio monitors to understand how much the placements affect the accuracy. Put on your favourite music. A music track that you know & understand very well. Then slowly shift your monitors, from it facing straight to having its cones directly facing you.

Listen carefully and you’ll find that the high frequencies become louder and more pronounced when it is facing you.

Understanding that sound produced from the tweeters and cones travel directionally, look for ways to elevate your speakers so that the tweeters are at your ear level. 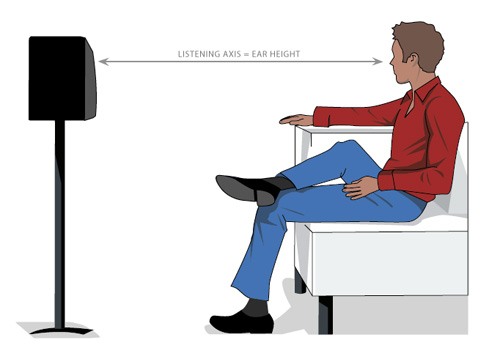 You can do this by using studio monitor stands or making use of a few isolation pads.

A nice inexpensive isolation pad is the SMPad 5 made by Sound Addicted. It features no branding in the front and works just as its advertised to do for a very small neat price.

The worst way to monitor is to have your studio monitors too low, with the tweeters at your chest level. Having speakers positioned too low will make you hear less of the high frequencies, causing you to mix inaccurately.

P.S. There are other brands like IsoPads which works well, but they are considerably very expensive!

3 – Near-field monitors means you listen to them up close!

As its name states, nearfield monitors are designed to be placed about one to two meters away from your listening position, and in some cases, closer than that.

There are a few advantages of near-field studio monitors. Let me list them down for you.

In larger studios, you often find that they use mid-field studio monitors. These monitors are placed somewhat further away from the listener.

Mid-field studio monitors are designed with a better ‘sound throw’. This means you’ll still hear and feel the energy of the speaker even if it is a little further away from you. On top of that, more people can listen at the same time to a pair of mid-field speakers.

The same with most large recording studios, mid-field studio monitors work best in a sound-treated room. With mid-field speakers, you’ll also hear the room sound. This can be great for trying to emulate what your listeners, who are listening on hi-fi systems will be listening to. You also get a ‘feel’ of the overall sound reproduction of your mix.

While mid-field speakers can often be more pleasant to listen to, as you listen to a more balanced, room-affected sound, you’ll find that even big studios prioritize having at least one near-field studio monitor for accurate listening. They’ll then switch between monitoring on the near-field and mid-field monitors while mixing to find the perfect balance.

To recap the few advantages of mid-field studio monitors:

4 – Forming an equilateral triangle with your studio monitors

An equilateral triangle is a triangle with sides with equal length.

See the diagram below: 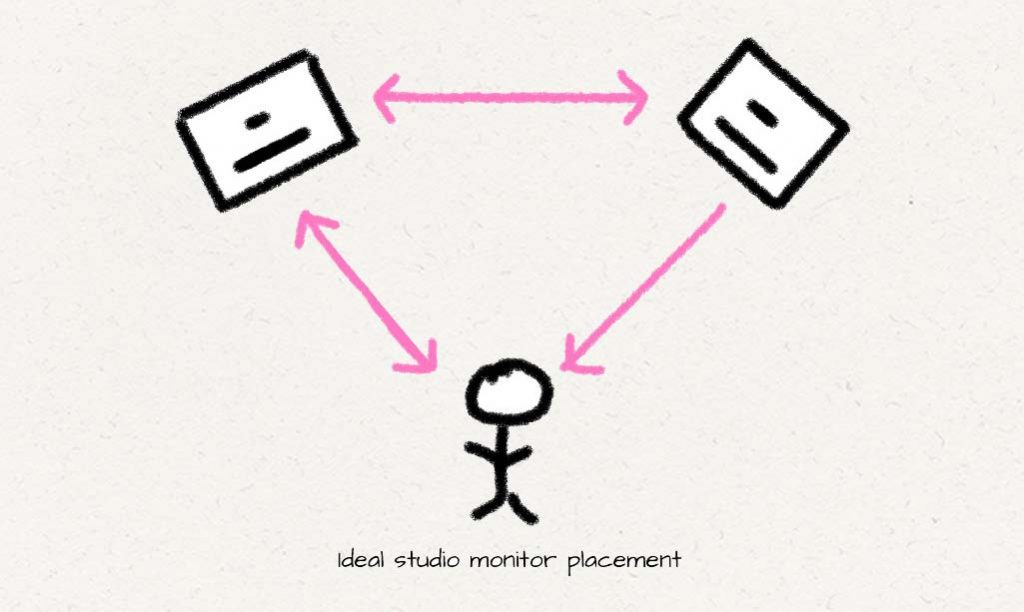 By forming an equilateral triangle (like the diagram above), you get a good stereo image from your studio monitors.

This is important, as, with too-wide or too-narrow speaker placements, you’ll tend to get a distorted sense of imaging and end up mixing your mixes too wide or narrow.

The speakers should also be pointed towards your ears for the best listening experience. A quick trick to align your speakers correctly is to sit in your sweet listening spot and look directly at the speakers. Make sure the tweeters are directly pointed towards you. Some speakers have a power led in front, which you can use to help align as well. Just make sure the led are shining at its brightness when you’re looking at it.

5 – Isolate your studio monitors whenever you can

It’s common to have your speakers sitting right on your studio desk or simply on top your console.

But did you know you can actually improve the sound from it?

The problem with placing speakers just directly on your desk or console is that the speaker becomes sort of ‘part’ of the desk and resonates along with it. This can often cause muddiness and not so pronounced speaker sound reproduction.

Large studios built with a million dollar budget normally have their speakers isolated in the air with cables. This way, the sound reproduction from the speakers are extremely accurate.

Granted, good studio monitors are built in a solid casing, where there is only a little vibration going through the speaker cabinet. But with most studio monitors, I bet you’ve felt the vibrations coming from your speakers if you’ve placed them on your desk before.

Here’s what you can do:

An inexpensive way to isolate your studio monitors is to buy isolation foam pads, just like the Sound Addicted’s SMPAD5 shown in the above video. Good isolation pads are usually built with high density – the shape shouldn’t change when speakers are placed on it.

It works by absorbing the vibrations coming from the speakers to the desk.

Personally, I wouldn’t advise you to buy the expensive isolation stands or pucks. 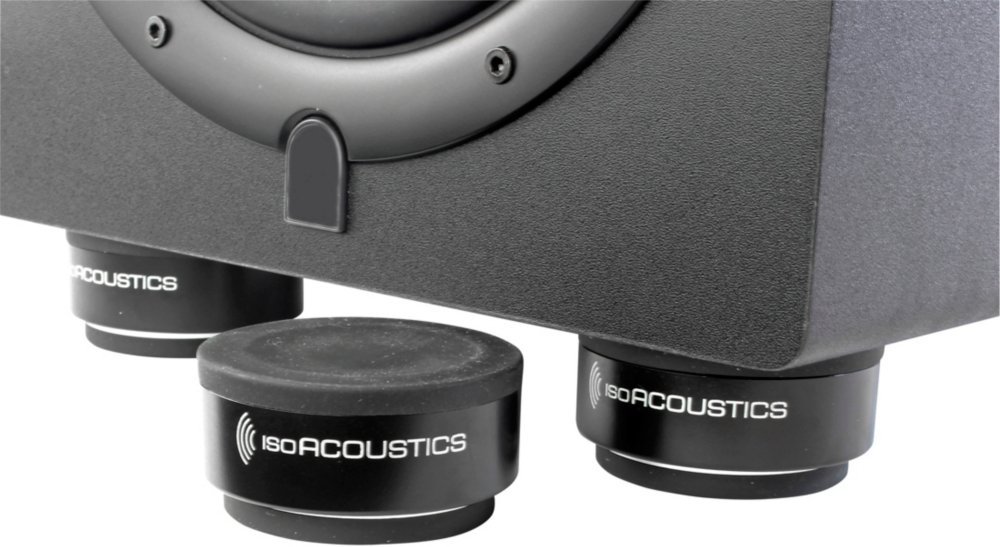 Pictured above are the isolation pucks by isoAcoustics.
They work, but you’re not getting huge value for the price you’re paying for.

Why? I hear you ask. Don’t they work to isolate my studio monitors as they were designed to?

Well yes, they do help isolate resonance and vibrations coming from your speakers. But in my opinion, the value you get with the expensive price tag isn’t worth it.

Isolation pad, pucks or stands all help isolate your studio monitors to some degree. However, they help only very slightly. Without a pair of trained ears, inexperienced music producers/engineers might not even hear the difference.

Additionally, in my opinion, studio monitors shouldn’t be placed at an inclined or declined angle. Having it placed in that fashion will alter the sound direction and won’t do too much good for accurate monitoring. 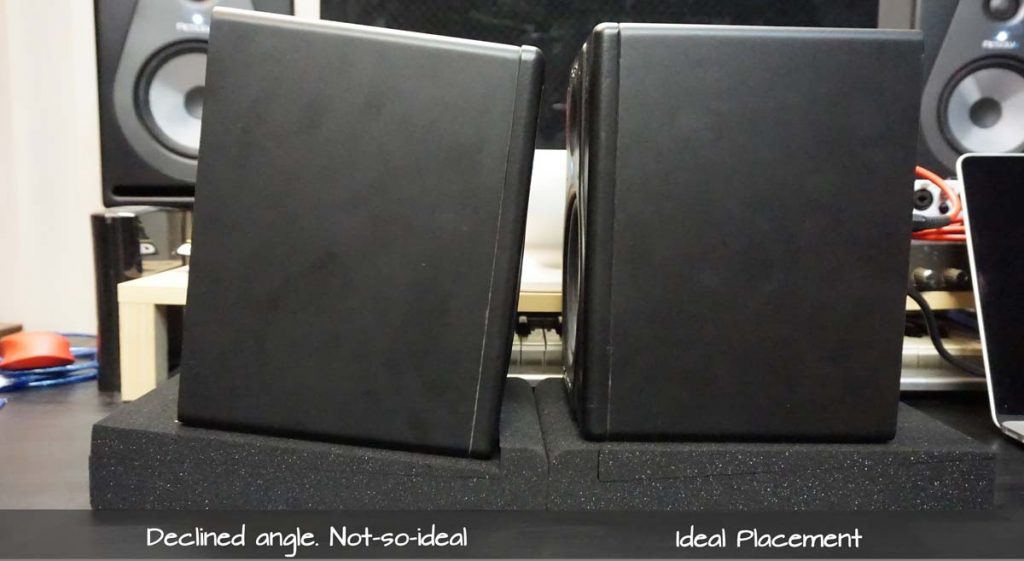 With the right speaker placement and room sound treatment, you’ll be monitoring more accurately than ever.

What are some tips that I may have missed out? Let me know in the comment section below and we’ll put them up.