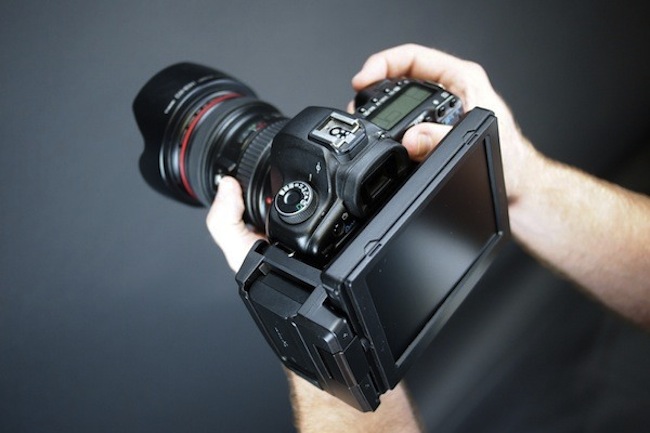 The Definitive Guide To Removing Noise From Audio

Did some audio recording and ended up having a noisy recording? You might still be able to save the audio with these restoration techniques, so don’t throw that audio away yet.

Perhaps you had a video recorded and the audio is so noisy that you are looking for how to remove noise from the video.

In this post, I’ll show you a few methods to reduce noise from your audio or video

Before I start with the article, I just want to introduce you to a software called Drum Xtract. It’s a software that helps remove musical elements from an audio recording (usually drums). And can be used to tighten up sound elements within a mix as well. You can read about it here: How to remove drums from a song.

We will go through these few topics:

First of all, you must understand that it’s impossible to remove 100% of the noise from recorded audio. It’s not possible. Even if it is, your recorded audio will most likely be unusable, due to the diminished quality.

Many people are also looking for quick ways to remove vocals from audio. While that’s not entirely impossible to do, it usually renders not-so-good results.

I suggest people who want to remove vocals from music to use a vocal remover tool like PhonicMind.

Using Audacity To Do Noise Reduction for FREE 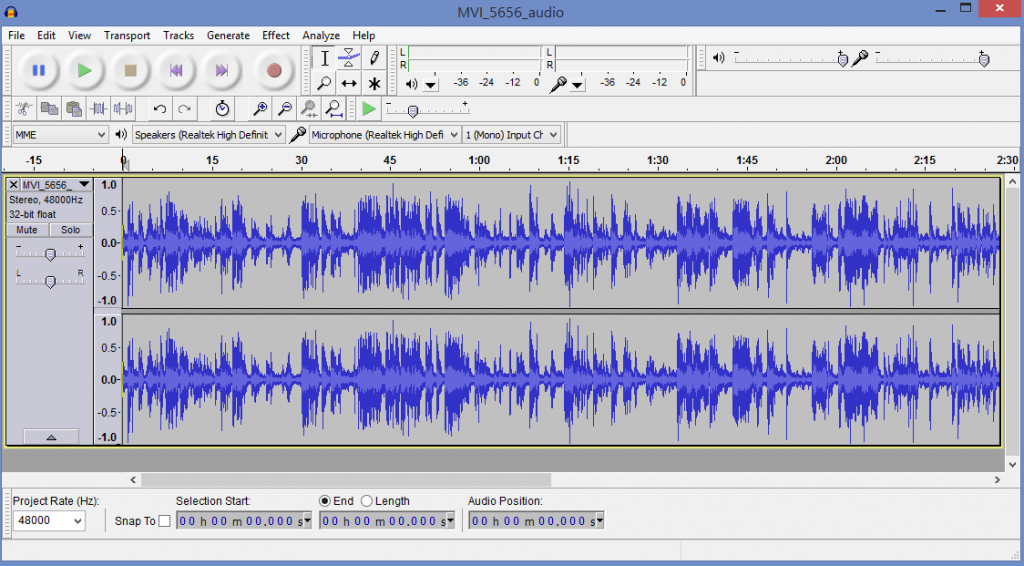 Audacity – A freeware audio editor that every producer should have installed

Audacity is a popular freeware audio software that runs on a PC or Mac. It’s free.

It’s an amazing piece of software that does nearly everything a good audio editor like Adobe Audition can do. It does noise reduction really well too.

If you’re looking for a quick solution to reduce some noise from one or two audio files, Audacity would be good for you.

Audacity accepts audio file formats such as wav, mp3 and more. For editing, you’ll want to edit in wav.  I’ve used an interview audio recording to illustrate the steps to come. 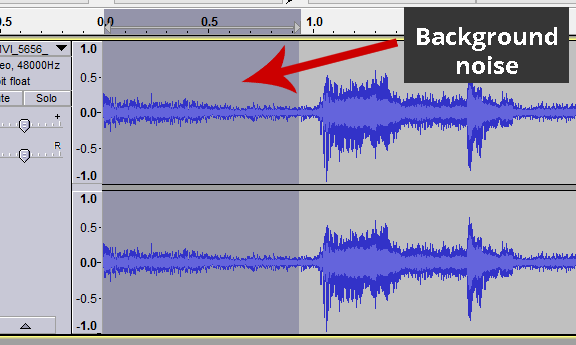 Find a section of the audio that only has the background audio.

Generally, the longer you can find the better. What we are doing is to select a section of background noise which we want reducing from the entire audio recording.

For my case, I found a fair 1-second background audio in the beginning portion of the audio recording before the interview speech came in.

After selecting, hover over to ‘Effects > Noise Removal’. 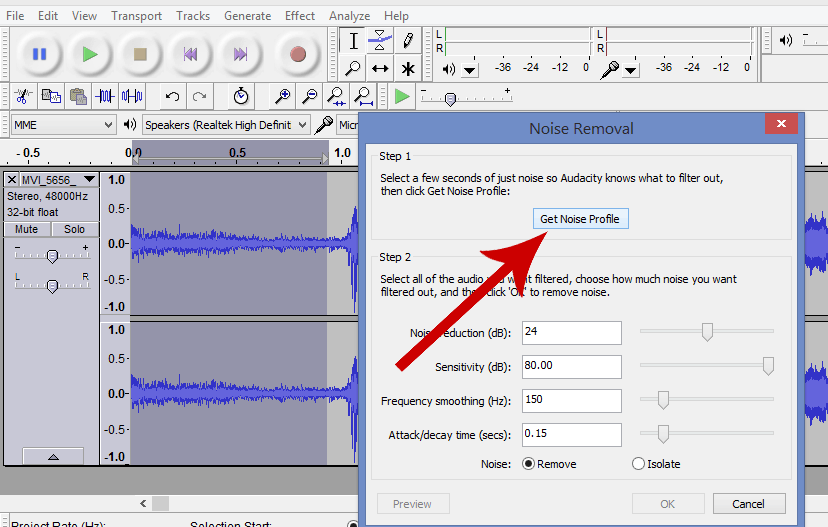 Doing this actually allows the Noise Removal effect to learn the noise selection you highlighted. This prepares the noise removal software to remove audio.

Listened to enough annoying noise yet? Time to remove it.

This time, highlight the whole audio file or select the parts of the audio you want the background audio reduced. 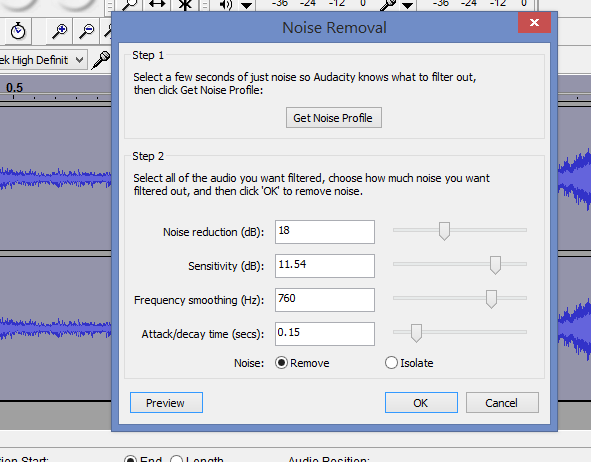 Utilizing the parameters correctly in ‘Step 2’ of the Noise Removal effect can give you the difference in the effectiveness of sound output you get. It’s important to understand them

Once you have the parameters set, ‘preview’ the audio file to hear how it’ll sound with the settings you made.

If it doesn’t sound like something you were aiming for, experiment changing the settings a little and then preview again. Once you get a denoising result that you want, click on OK to commit to the changes.

Prefer to watch a video? See how I do it in the video below:

Using A Denoiser VST in A DAW

I use Adobe Audition all the time for noise reduction. Most audio editors have audio reduction effects built in.

Most popular DAWs however, do not have it.

I was mixing audio for a documentary in Logic Studio on a Mac, when i realized I needed a denoising plugin to run inside Logic.

So I started testing noise reduction plugins that are available in the market. Having tried lots of them, I finally settled for iZotope RX. iZotope features a very nice denoising effect that works as a standalone and also as a VST/AU plugin.

Here’s a video of me denoising a noisy interview video using iZotope Denoiser as a plugin in Adobe Audition:

How To Remove Noise From Video

I get this question all the time.

The thing is it’s not that your video is noisy. It’s the audio that was recorded together with your video which is noisy.

This usually happens when you do a video recording on your camcorder or DSLR without a dedicated shotgun microphone like the Rode NTG2 or a suitable lavalier microphone.

There’s no way around it than to invest in a set of dedicated microphones and portable audio record to get good audio when recording videos.

DSLR takes good videos, but the in-built microphone is a nightmare for interviews

Anyhow, if you already got your recordings, don’t discard it yet. There is still hope of saving them… for now.

I’ll explain how I normally do the job of removing noise from audio.

Step 1 – Find A Way To Unlink Audio From Video

You need to find a way to unlink the noisy audio from your video. This is because you have to edit the audio, not actually the video itself.

I edit my audio with adobe audition through premiere pro

Step 2 – Do the Denoising within Adobe Audition

Once you click, ‘edit with Adobe Audition’, Audition will load with your audio file in it. Within Audition, I use can use it’s built-in noise reduction effect to remove the noise from the audio clip.

However, I prefer using iZotope RX Denoiser as it gives me better control over the noise that I want to reduce.

I’m using iZotope Denoiser as a VST in Adobe Audition

If you don’t have a 3rd party VST plugin like iZotope RX Denoiser, just use the built-in denoiser in Audition.

Once you’re done with the edit, just save and close the program.

Back in Premiere Pro, the audio will be updated with the edits you have made. At this point, you’ll have to export your video, so just re-export your video with the now denoised audio clip.

The Best Noise Reduction Software to Use?

In my opinion, the best noise reduction software in terms of price and ease of use would be iZotope RX.

iZotope RX, since the early days, comes with a multitude of other effects which you’ll find very useful for audio restoring projects. No matter if you’re into broadcasting, audio restoration works or simply a recording engineer looking to clean up your vocalist’s audio files, I guarantee that iZotope will be able to handle all of that.

I’ll briefly talk about the additional software functions that come with iZotope RX.

Note that while the version used in the screenshots below may be an earlier version, the concepts of using it still remain the same.

The difference? Every new version usually has its algorithm optimized to be more efficient in CPU processing and to produce cleaner and higher sound quality. 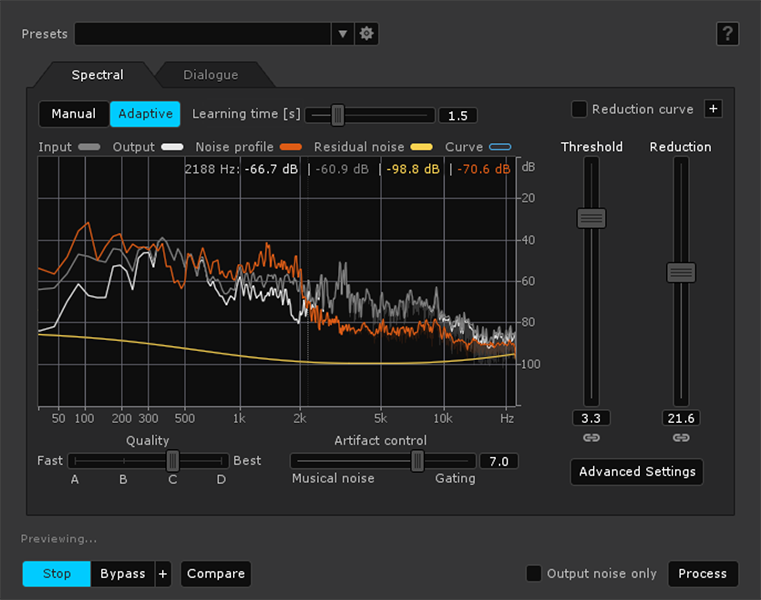 RX Denoiser works like most noise reduction effects. The advantage that RX Denoiser has over standard audio reduction effects is that it has different algorithms in which you can use to get better results for denoising. It also allows better control over the ‘artifacts’ which are normally left in your audio tracks after you process denoising effects.

In RX 4 you notice a fairly easier interface to use and also an addition of a ‘dialogue’ tab, which gives you more control over denoising audio for dialogues. 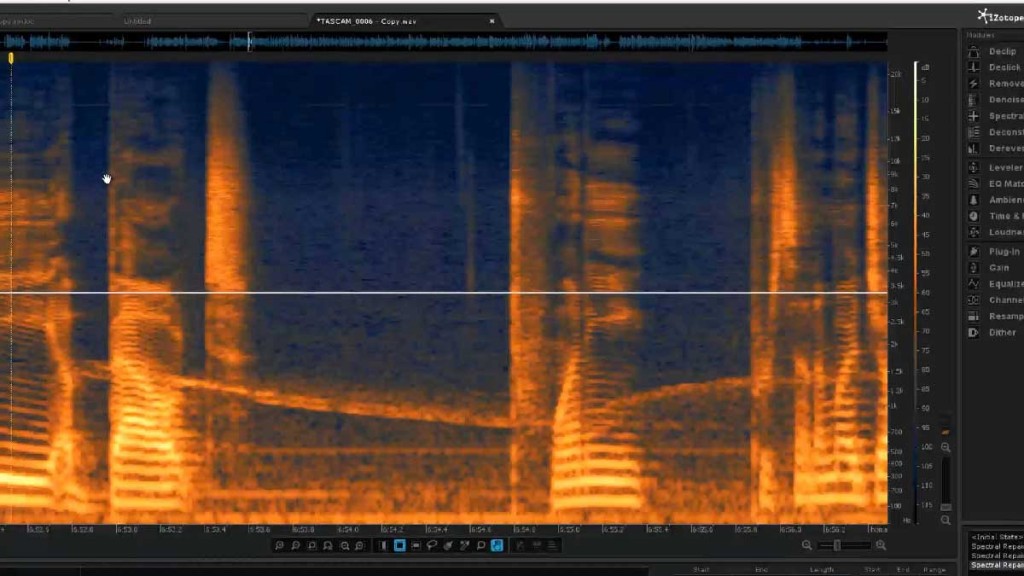 Spectral Analyser is another effect that can be really useful if you do audio work for broadcast TV.

With Spectral Analyser, you don’t edit on waveforms but on spectral frequencies. This allows you to zoom in into noise audio frequencies and remove sounds, for instance, a single chair squeak during an interview recording. Drops and cuts in audio can also be fixed. The effect accomplishes this by collecting audio sounds around the problem area.

Try it and you’ll notice it’s a little like ‘photo-shopping’.

Does what its name implies. Removes clipping that happens in a recording.

This effect has saved me many times when I recorded an actor who suddenly screamed in her role, causing my the audio recordings to clip.

Declicker is great when using it to restore things like old tapes and I found DeHum especially useful when trying to repair a concert sound recording that had lots of hum, due to the audio hardware setup.

Having done many recordings outdoors at noisy locations and getting into trouble, here is a list of best practices to put in mind when recording outdoors or in situations when noise is inevitable.

Did I miss any best practices when recording outdoors and when dealing with noisy audio files? Let me know in the comment box below: