6 Types of VST Plugins To Add Character to Your Vocals

Just recorded a vocal track, and looking for ways to add

Most producers who work on vocals usually have their own vocal effect chain that becomes their signature sound.

Typically it consists of some EQ, pitch correction, different types of compression, reverb, and delay.

But things get interesting when producers dial in a little of not-made-for-vocals effects like saturation, distortion, phasers, and more, giving their vocal tracks a distinctive sound.

In this post, I’m going to walk through 6 less commonly used VST effects that can add character to your vocals. Whether you are recording your own vocals or finding vocals online, these effects can help you achieve a more unique sound and hopefully fuel some creative inspiration!

Saturation is a great way to add a bit of grit (and noise) to your vocals. It is basically the essence of what makes analog hardware sound pleasing to the ear. Although you probably can’t the exact saturation you get with an actual hardware pre-amp or compressor, but these days saturation plugins are about to emulate quite near to their hardware counterparts.

A slightly saturated vocal mixes really well in heavy tracks that are real bass-heavy or just a bit gritty in general.

Here is the effect on a sample vocal:

In this example, I used Soundtoys Decapitator, but there are a lot of great saturators that you can use to achieve the same effect!

It’s usually best to add just a small amount of saturation for most tracks – probably even less than the above example. But depending on the song and how you’re mixing the vocals, you can get away with more.

Chorus is often an overlooked effect that can give vocals some character.

The way the chorus effect works is it delays the signal for a few milliseconds and widens its tuning by detuning the signal and mixing it with the original sound. Played back this makes the vocal track sounds thicker, giving it that extra width – especially if you’re working on a solo vocal track.

There are many types of chorus VSTs out there that are both free and paid. In fact, most DAW’s have a chorus plugin included.

Here is an example of the chorus effect:

In this example, I used the Valhalla Space Modulator. It’s a free plugin by Valhalla (known for their huge-sounding reverb plugins), and it’s a really handy plugin that outputs all sorts of chorus-like effects.

Similar to the saturation example, I’ve gone slightly overboard on the chorus effect so that you can hear how the VST plugin affects the sound. In modern vocal mixing, a slight chorus effect usually does it.

Pitch and Formant shifting usually go hand in hand – and are mostly used to pitch vocals up and down, creating vocal chops in dance music.

Here’s a trick. Keeping the pitch the same and only alternating the formant can give your vocals a unique character.

In this example, I used the Little AlterBoy vocal processer plugin from Soundtoys. It’s a top-rated pitch and formant shifter plugin, that allows you to dramatically alter a vocal track.

Don’t want to spend? The good news is that most DAW have a pitch and format plugin included.

The key to formant shifting is to keep the shift between 1-3. Any more than that, your vocals will begin to sound unnatural – which in fact isn’t a bad thing, if you’re looking for a ‘vocoder-like’ effect. 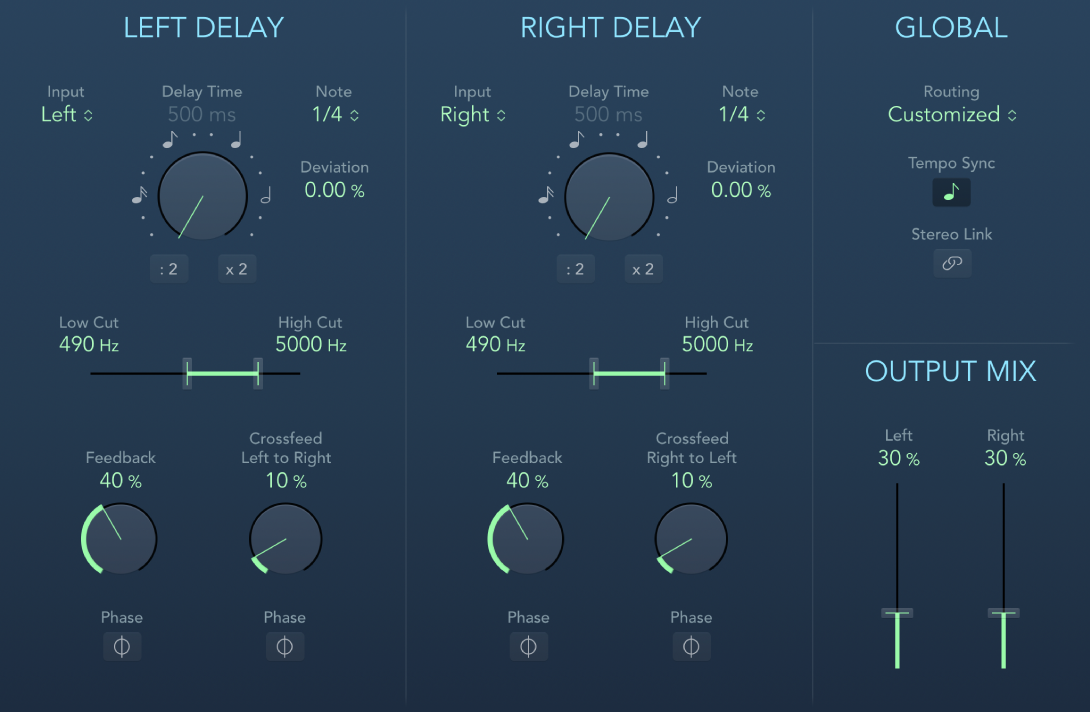 This is one of my favorite effects to use on vocals on the list. It gives a very natural reverb type of sound that can make a vocal sound almost like it was sung in a subway tunnel.

To get this effect, all you do is use any delay plugin where you can set the delay time to around a 1/16th note. You can stop there. But I find that it sounds best when you add a sample delay right after.

A sample delay (stereo delay) allows you to delay the left and/or right output of an audio signal. By delaying one side just slightly more than the other it creates a cool widening effect on the vocals. Here is the effect:

In this example, I used Logic Pro X’s stock Stereo Delay Plugin with a delay time of 1/16th, as well as cutting out the low frequencies of the delay.

Then I used Logic Pro X’s stock sample delay plugin with the left delay set at 20ms and the right set at 50ms. This type of sound would be great in trippy electronic music or a track where the vibe is more natural and acoustic.

Distortion is another less explored way to add a bit of grit to a vocal. However, there are producers who run their vocal tracks through a guitar amp to make it muddier and gritty, for that special effect.

It creates a very similar sound to what a saturator would do. But in most cases, distortion creates more grit and sound heavier.

A saturator can be slightly more subtle than distortion – which is why I typically reach for the saturator more often. But distortion is recommended when you want a bit more dirt on the vocal, depending on the type of music genre you are producing.

In this example, I used Logic Pro X’s stock distortion II plugin. Since distortion can easily overpower a vocal, a great trick is to use a parallel mixing trick.

This way, the duplicate track acts as a bus send, and it’s easier to get just the right amount of distortion on the vocal.

An exciter is a great way to brighten up a vocal. The exciter effect adds high-end harmonics to your vocal track, giving it that silvery airy sound that sounds good on vocals.

It also helps the vocal track punch through a big mix, that’s why you often see EDM and electronic music producers using exciter effects on their vocal tracks.

Here is how an exciter effect sound on a vocal track:

In this example, I used La Petite Excite by Fine Cut Bodies. It’s a free plugin – so no reason not to add it to your toolbox!

But be careful with adding too much exciters on your track, causing the high-end frequencies to quickly get out of hand. I’d recommend dailing the exciter to a level where you think it sounds good, and then dial it a bit back to be safe.

Having too much exciters on a vocal track can cause your vocals to sound thin and bad, when played back on a low-quality speaker such as a phone or laptop.

There you have it!

The 6 VST effects that can give your vocals a more unique sound.

It’s easy to get stuck in a box producing with the same presets and effect chain settings. So do yourself a favor and experiment with new plugins to find ways to make your sound more unique.

Don’t hold back. With the many plugins available these days, experiment with different plugins, even those that are not made for vocals and who knows! You might just find your signature vocal sound.