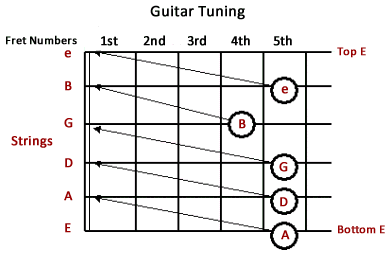 Getting Started : How To Tune A Guitar

We’re going to start of with tuning your guitar in Standard Tuning which is probably what you’re used to. First off you’re going to need to know the keys of each string, they are as shown below.

Committing this to your memory is essential as you might not always have the time or resources to find out what keys to tune your guitar in.

One common trick is to memorise the notes from thickest string to thinnest — E,A,D,G,B,E.

Now you know what key each string is supposed to be in, tuning your guitar is as simple as grabbing a tuner

What tuner to choose

Tuners today coming in many ranges and types. The most common being clip on tuners.

Clip on tuners work by clipping onto the headstock of your guitar then displaying the key of the string being played. These tuners are one of the most efficient and budget friendly.

Second on the list of commonly used tuners are tuner pedals, these are most favoured by electric guitarists or guitarists that also use effects pedals.

Seeing as you’re already using effects pedal, having a tuner pedal seems like a good option as it keeps all the things you need to take care of together

If you have the good fortune or foresight to buy an amplifier for your guitar that has a tuner, that works too, though bear in mind not every guitar in existence has pickups or offers the option to plug into an amp.

Similarly however, acoustic guitars that have pickups or a preamp system tend to have built in tuners as well.

What to do when you don’t have a tuner

Say you’re lost in the jungle with a guitar and a beautiful woman that could potentially be a succubus but want to serenade her and win her heart on the off chance that she isn’t a blood sucking demon, how do you tune your guitar?

Here’s a nifty trick I learned from a guitar playing hermit that used to live in the mountains of Tibet.

First tune the thickest string on your guitar to the closest thing you can think of that sounds like an E. If you can’t remember what an E sounds like then go with whatever feels right, but nothing higher than your average male speaking voice.

Here comes the part where its crucial that you’ve committed EADGBE to your memory.

After you get your “E” press down the 5th fret of your E string and you’ll get an A, now play the second thickest string and tune it till it sounds the same as the E string when played with the 5th fret pressed down.

That’s 2 strings tuned. Press the 5 fret of the A string and you’ll get a D.  Play the third thickest string and tune it till it sounds the same as the A string when played with the 5th fret pressed down.

Getting the hang of it? Cool, do the same thing to tune your G string (Don’t laugh). After you’re done with that comes the  slightly tricky part.

In the case of the B string. To get a B on the G string you’re going to need to press down on the 4th fret as opposed to the 5th. Don’t worry, this is the only time this anomaly occurs.

To finish off, press down on the 5th fret of the B string to get an E and tune your high E string.

Bear in mind that even though it may sound good and in tune it might not be accurate as your lowest string may not be an E.

Give this trick a shot and tune and you will find that although your guitar sounds decent enough it might not be EADGBE, that’s okay though, it’ll be enough to serenade your succubus. 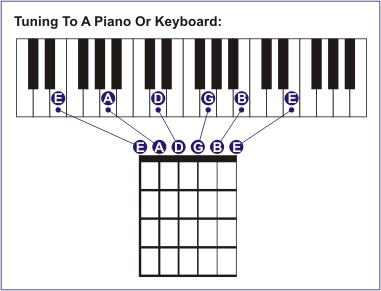 Incidentally if that succubus plays piano and one is nearby you can always get it to play the E,A,D,G,B and E notes on the piano respectively and tune accordingly trusting your ears and making sure the notes sound the same.

That about wraps it up for tuning your guitar. I hope you people keep playing in tune and as always rock on!

Comment and tell me your thoughts on your favourite tuners and tuning methods.