A Quick Guide To Selling Your Used DJ Gear

As a modern DJ or music producer, you’re bound to have some gear lying around that you no longer use. Rather than leaving them unused, it’s smarter to off-load them by selling them to an interested buyer.

Remember – the way to become wealthier, is to build up assets.

I’m not saying that you’ll become a rich DJ from selling used gear. All I’m merely suggesting is that it’s better to convert things you don’t use into some cash, so you can re-invest it somewhere else.

In this post, I’ll share some tips that will help you get a better deal when selling your used gear. Let’s get started.

How to price your used DJ gear.

The very first thing to do, when selling your gear, is to first figure out the current selling price.

Go into platforms such as eBay or Facebook Marketplaces (where people are hanging out), and search for the gear you’re looking to sell. You can also use Checkaflip, a nifty tool to quickly see a list of current selling prices on eBay.

Here are a few things to observe:

This should give you a good gauge of how much demand is there in the market for the gear you’re looking to sell.

It’s also worth noting that the prices might be different on different sites, due to the nature of the platform. eBay users, for example, might place higher ‘buy now’ prices for their used gears, as they’ll be hoping to get a better deal through bidding.

The price that you can sell your gear at also highly depends on the condition of your gear. I don’t need to tell you that gear in good condition can get a better rate compared to a faulty one.

Getting a better price for your used DJ gear.

Let’s talk about how to get the best possible price for your used DJ gear.

I can’t stress how many times I’ve come across a badly maintained, dirty-looking used gear on buy/sell marketplaces. The first thing I’ll do is to haggle for a lower price, using its condition as an excuse.

Don’t fall into that trap as a seller.

Taking a little time to clean your gear before putting them up, can immediately fetch you a higher price. Here are some of my go-to tools when it comes to cleaning and prepping my gears to sell:

What if your gear has plastic parts that have yellowed? Here’s a good video that explains why this happens and shows you how to turn plastic bits like the keys of a MIDI controller, white again:

The bottom line is you’ll most definitely get a better price if your gear looks clean and well-taken care of. So don’t get lazy. Clean your gear!

Buyers are usually impatient, so they’ll first judge an item they are interested in by its visuals. This means it’s a must to take clear photos of the gear you’re selling. Include as many photo details as possible.

This is when a carefully written description of the gear you’re selling comes in. Most new sellers focus on the features of the gear they are trying to sell. So they start copying the exact product features from the product’s website. Don’t do this!

Instead, write in the description, a clear way to reach you if the buyer has questions. How soon can you meet to pass or courier the gear over?

After determining the price of your gear, don’t forget to factor in additional costs such as selling fees, packaging, and delivery cost.

It’s always better to eat these costs, as passing these costs to a buyer might just turn them off from the sale – wasting the time you took to deal with the buyer.

Burn these costs into your final listing price if you must.

The downside to owning digital gear.

Unlike analog gears like microphones or hardware pre-amps, most modern DJ equipments are digital. Digital time loses its value quickly, as soon as it leaves the store – mainly because new software updates would quickly render them useless.

That is why buying analog gear could be a smarter move, in investing sense – as they retain their value better.

Where to sell your used DJ gear

Technically, you can walk into a local music store and trade your gear. However, that wouldn’t be the best way to get the most out of it.

Rather than trading it in a store, sell it directly to other people. Let’s explore some of the best places to list your used gear these days.

There are tons of people on Facebook. How would getting access to over half a billion users sound to you? Besides being free, it’s extremely easy to sell your equipment on Facebook. 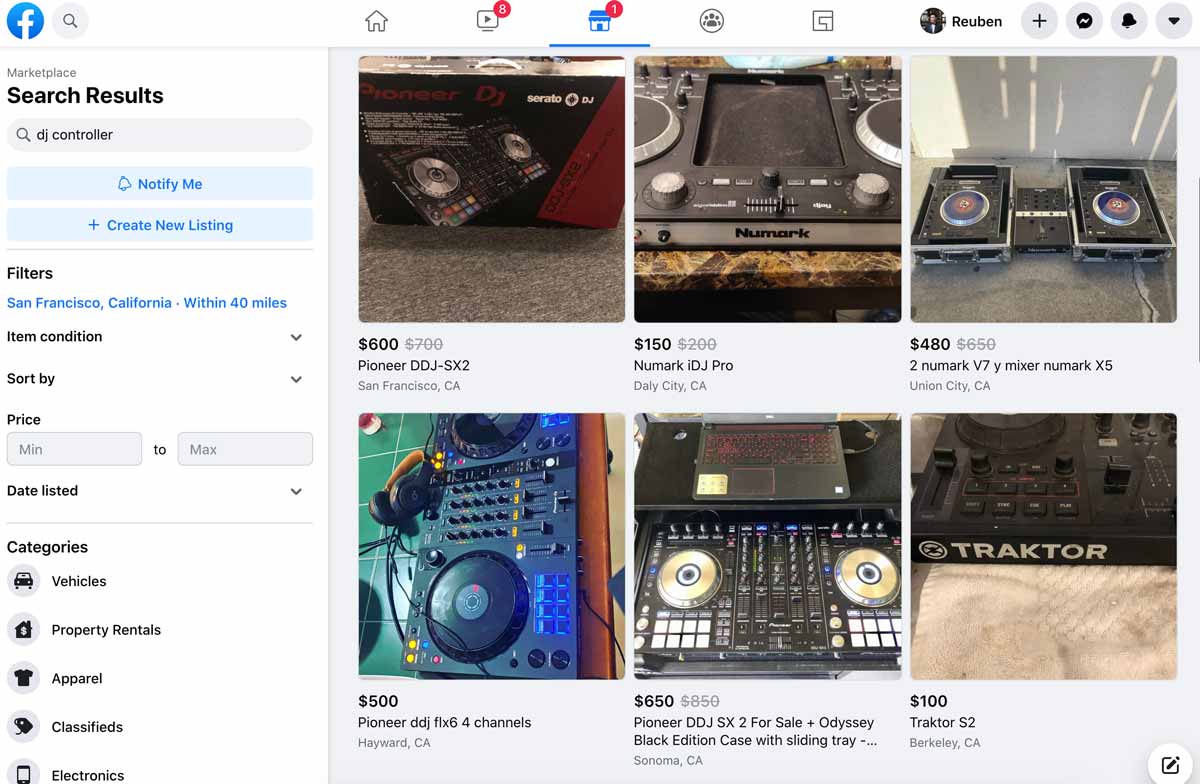 Another reason why selling on Facebook Marketplaces is so effective is because buyers can see your profile. This creates a sense of trust when they can see the profile of the seller.

That aside, upon posting your item, you could reshare the listing into different “buy and sell groups” that you’re in to get more views on the item.

Reverb is a marketplace for new, used, and vintage music gear. Mainly focused on musicians, DJs, and music producers, it’s a perfect place to selling your used gears, given the big audience it has.

Selling on Reverb has some extra advantages. You can post listings for free and get protected as a seller through Reverb Payments. This convenience comes with a small cost of a 5% selling fee and 2.7% + $0.25 in payment processing fee, bringing up the total cost of selling gear in Reverb to be around 7.7% of your sale price.

There might be more work involved when selling gear on Reverb, but it’s a good tradeoff given the security you’ll get.

Craigslist is one of the top 20 websites in the US. At this time of writing, it beats Netflix, Zillow, and Walmart. For you, that means access to a huge audience looking to buy and trade. 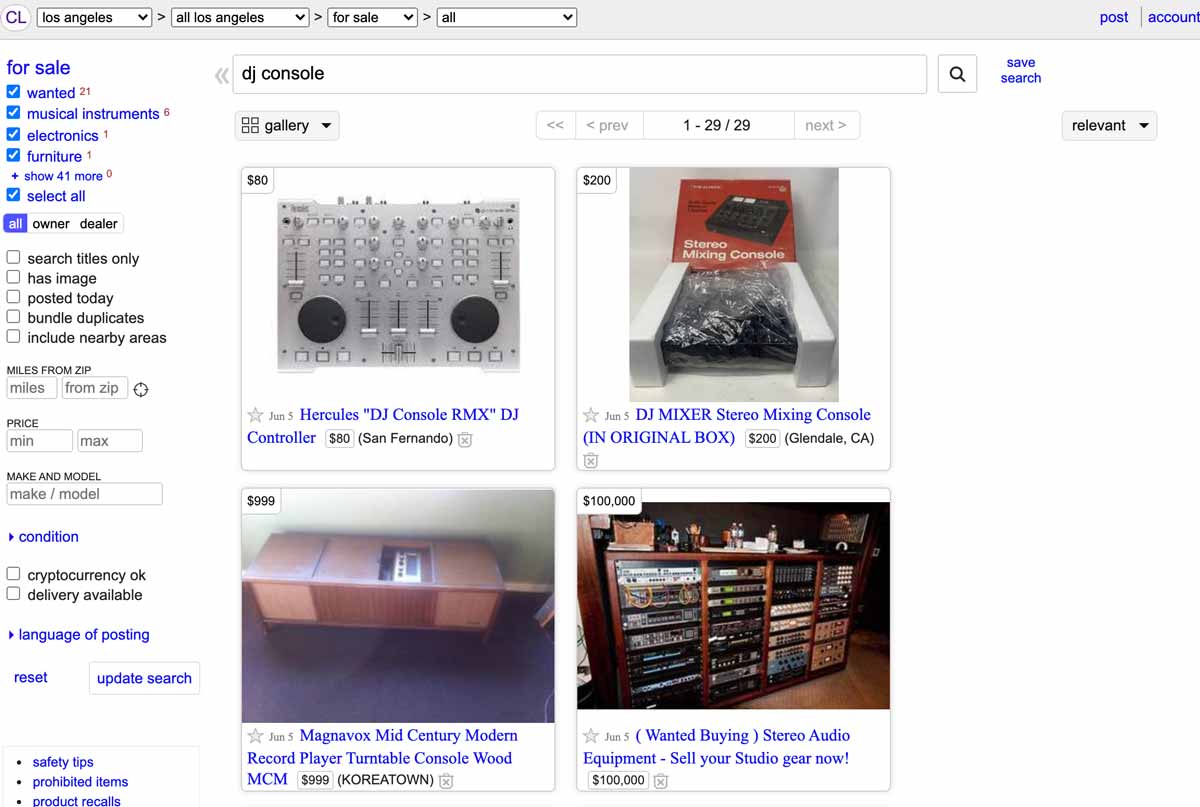 There are no listing or selling fees involved and it’s very easy to list items. If you like to protect yourself, you can also post anonymously.

Although Craiglist is local-centric, meaning you can sell your equipment to people around your location, it’s a good idea to list your gear in neighboring cities too – especially if you’re selling rare gear.

The downside to Craigslist is that it offers no seller protection. You don’t know who the buyer is and there have been occurrences of scam cases on the platform.

This is like Sweetwater’s version of Craiglist, where instead of buying directly from Sweetwater, you can choose to list to sell your gears to other users too.

Most of the listings are guitar and bass instruments, although there’s plenty of listing for DJ gear. Take note that there is no seller protection, so make sure to not blindly shipping your gear to a buyer who hasn’t paid – or has paid via Paypal.

eBay needs no introductions. It’s been around a long time. The question is whether if it’s still relevant and worth it to sell used gears on eBay?

From what we gathered from certain sellers on eBay, it’s better to do a ‘Buy It Now’, rather than to bother with auctions.

eBay is also normally used by sellers who sell regularly. As a casual seller, you might find the setup to be fairly time-consuming.

While eBay still commands a large audience of buyers, be vary of the fees the platform charges (around 10% for each item you sell) and the increasing number of bad buyers throughout the past few years.

Hopefully, this brief article has given you some ideas to get a better deal out of selling your used DJ gear.

Remember, one man’s trash is another man’s treasure. In the spirit of reusing and reducing, if you have a gear that you’re no longer using, consider selling it. You also get some money back in return.

What is some DJ gear you have resold? And where are your favorite places to sell them? Share your thoughts with us below.