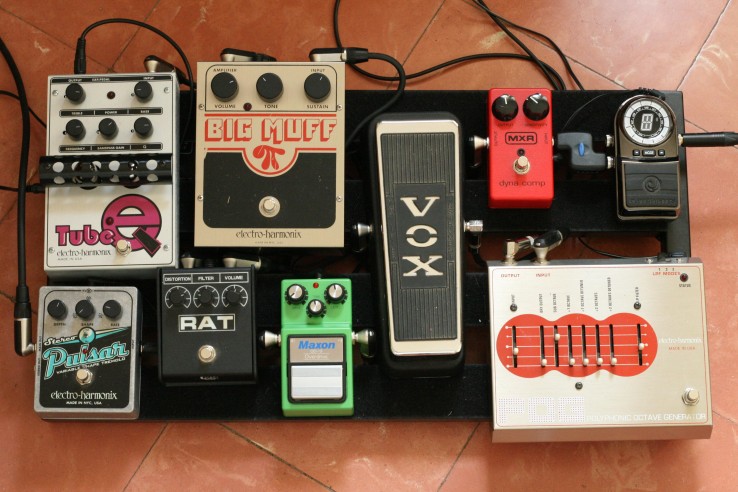 5 Must Have Electric Guitar Effect Pedals

As a guitarists we often find ourselves spending our money on tonnes and tonnes of gear. One of the things we spend our money on the most is pedals. So here’s a short list of must have pedals for my fellow guitarists out there.

Disclaimer : The importance of the pedals on this list are not shown in numerical order. Pedals listed are not a substitute for skill or practicing guitar neither are they absolute must-haves for every guitarist out there, rather a general rule of thumb to go by.

This one should be simple enough. The entire foundation of everything you’re playing musically bases itself on your instrument bring in tune. If your instrument is not in tune, none of your chords will sound the way they’re expected to, in fact they’ll probably sound hideous and the ears of you and your bandmates.

Speaking of bandmates, good luck playing with a band when you’re the only one out of tune. On the off chance all of you are out of tune together, well…. Record a jam session if you don’t understand what I’m trying to say. If you still don’t understand then don’t quit your day job.

The Boss TU-3 Chromatic Tuner is a good choice for a badass tuner that goes together with your gig pedal box.

Click here to check the TU-3 Chromatic Tuner out – $99

Think of every rock and roll/blues rock/rock song you know. Now listen to the guitars. Do you hear the way the guitar sounds absolutely awesome and is one of the reasons you love to rock so much? That’s overdrive.

To be more specific that is gain. Having an overdrive pedal or overdrive channel on your amplifier allows you to give a more electric and aggressive sound to your guitar compared to the way traditional guitars sound. That’s overdrive.

The above video shows one of the best overdrive pedals around.

Although the contributions of a delay pedal to your tone and sound might not be that pronounced as one of an overdrive pedal, its lack of fanfare is not an indication of its importance. For those of you who are not familiar with it a delay pedal is in essence a repeater, or echo pedal.

It recreates what you’ve played within a certain time span a certain amount of time after you’ve played it. Varying amounts of delay can dramatically change the texture of your sound as a lead and rhythm guitarist.

A fantastic delay pedal that has a veru pure sonic quality with the analog touch.

Check out the Duncan Vapor Trail Analog – $149 (A little more expensive, but worth your pennies for the analog sound.)

The distortion pedal is what the overdrive pedal is to rock to any aggressive sounding subgenre of rock and is to a certain extent the “big brother “ of the overdrive pedal. Used correctly it can open a new dimension to super aggressive metal riffs or searing solos like the ones Eddie Van Halen are famous for.

Although this pedal may not be necessary if you’re a blues or jazz guitarist having it does offer you a new dimension of sound.

A generous amount of gain where you can use it as for low distortion or even for blues. Buy this for the volume gains.

Picture yourself playing in a huge hall or stadium. Can you hear that space after you play even a single note? A reverb pedal offers that same texture and space without the price of renting out a stadium. Used in moderation it can also give you a richer tone, much like the delay pedal.

The Hall of Fame is some epic effect you can add to your guitar effects.

Made famous and popularised  by guitarists such as Jimi Hendrix, Kirk Hammet and Slash, the wah wah pedal needs no introduction, although it is only meant for certain types of guitarists who are intent on sounding a certain way.

Very well built, gives you killer wah-wahs and you can even change the voicing of the wah wah.

What other guitar effects do you have in your arsenal which you think I missed out? Please comment below because we’d love to add them up as suggestions in this post.