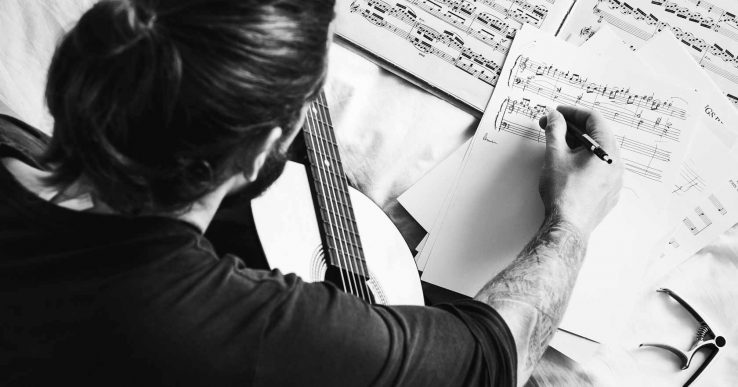 One of the nice aspects of making beats on your own computer is that you are in your own world of creativity and production. You don’t have to answer to any teachers or bosses on the quality of the music you make.

But that’s no excuse to be lazy and not put the effort into your music production. While focusing on audio engineering skills is important, knowing how music work is essential for anyone who calls themselves a music composer or producer.

In this post, we’re going to introduce you to music theory.

Getting started with basic music theory as a music producer.

Whether you produce K-Pop, Drum and Bass, House, EDM, or Pop music, the rules are the same. In fact, the theory you will learn is the same as a country musician in Nashville would.

The key to understanding music theory is to relate it to practical, so it’s advised to be sitting in front of a MIDI controller or piano as you learn.

A MIDI controller keyboard is fine as long as it has at least four octaves (49-key). As we discuss the concepts below, try to follow along, play, listen to the notes, and their relationships.

In western music, the language of our alphabet is the 12 tones equal temperament system, which means we have 12 notes we are working with. If you are into producing microtonal music on your modular synthesizer; that is awesome. But first, know your 12 notes!

When we put them in order we get the 12 tone scale, or more commonly called the chromatic scale.

The notes that have a slash are enharmonic to each other. This also means that C# and Db is exactly the same note.

When do you use C# or Db then? That depends on the key you are performing or composing in. In our example, we’ll use the C key (as it’s the easiest key to begin with.)

A key is a group of major or minor scales that forms a basis of a music piece – in classical, Western and Pop music.

Let’s take a music piece that is played in C major key. The piece will revolve around the 7 notes of the C major scale – C, D, E, F, G, A and B. The fundamental notes that make the music piece, including the bassline, chords and melody are all from the 7 major notes.

Similarly, a piece of music can be in a minor key and revolve around a natural minor scale. For example, a song in the ‘key of D minor’ uses the notes of the D minor scale – D, E, F, G, A, Bb, and C.

Any major scale or natural minor scale can serve as a key for a piece of music.

How many music keys are there?

One way we can find the key of the music we are in, along with other information is the Circle of Fifths.

The circle of fifths represents the relationship among the 12 tones of the chromatic scale, their key signature and the associated major and minor keys. 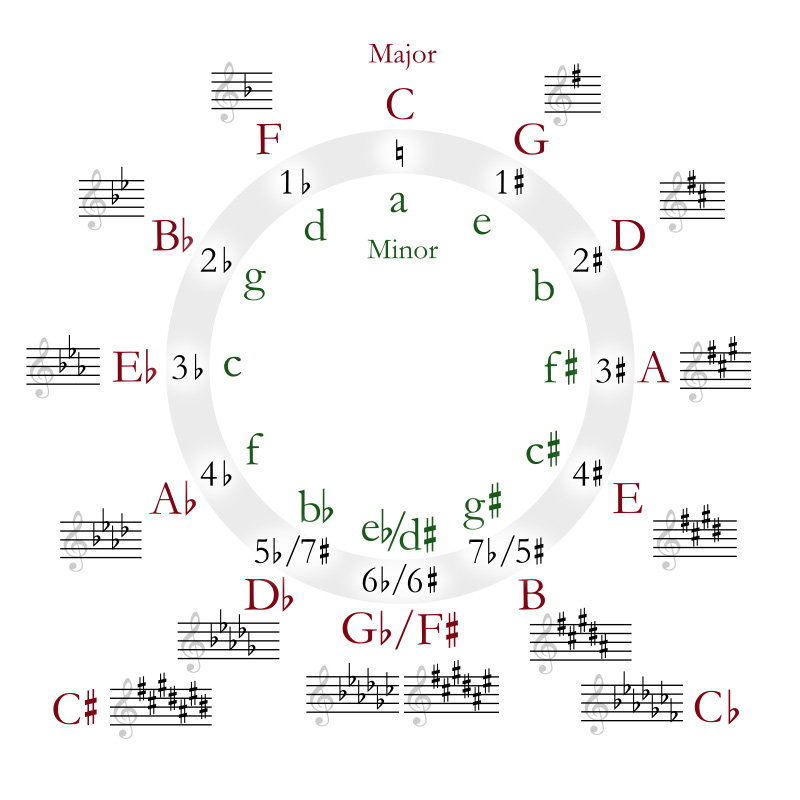 It’s called the circle of fifths because of the relationship among the 12 tones. (See the diagram below) 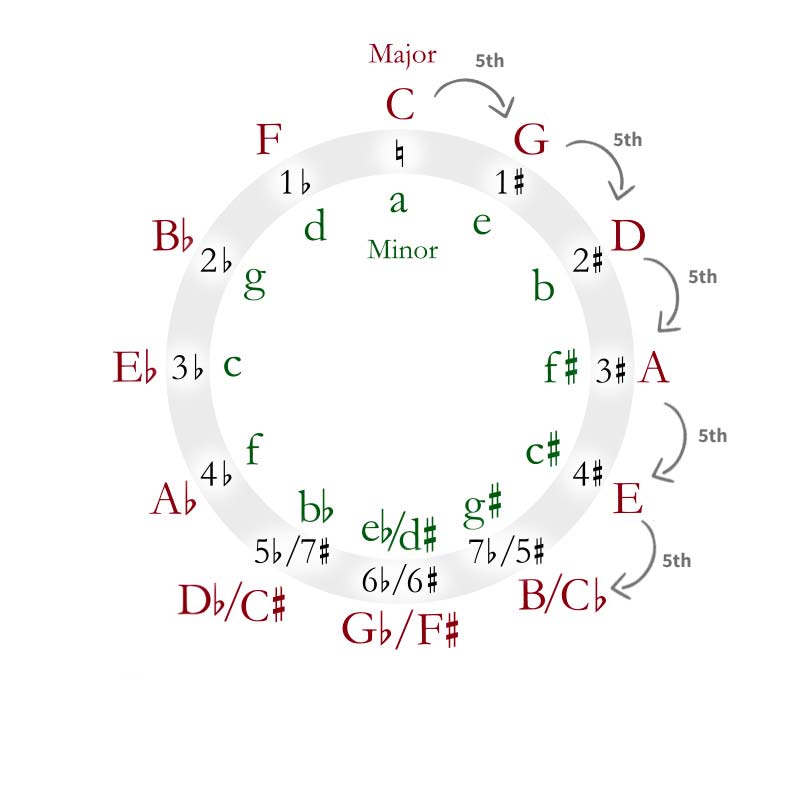 While some of this chart may seem strange now, in time it will all make sense. For now, take a look at the outer circle, this tells us the key signature of our music. This is often our tonic note and chord that we want our songs to resolve on.

Now you will learn the relationships between those notes, but first, we need to explain how we count our steps. It can get a little confusing and it is important to realize early on how you are counting.

When you move one key on the piano it is a half-step or a semitone. When you move two keys, that is a whole step or a tone. Notice in our chromatic scale earlier how the notes E and B don’t have sharps? That is because they are only a half-step apart from the next note.

Every interval in each key has the same sound as long as they are the same steps apart. So if we play the notes C, D that is a tone apart, and it will sound similar to D, E. The sound these intervals make is essential to how they work.

Here’s a table for the interval name for each number of steps.

One of the best ways to understand these intervals is to use song examples. If you play the C, C# or the minor 2nd interval fast – it should sound similar to a music theme you’re familiar with, Jaws! There are some great ear training videos that give examples of all the intervals above.

Just remember that an ascending interval sounds different than a descending.

Of course, moving from C, C# sounds different than moving backwards at C#, C. And again this works for all the keys in music, and you can practice by listening for them in your favourite music.

Certain intervals are more popular than others, the perfect fourth and fifth are the most common that you will see in many genres. And the tritone interval was once known as the ‘devil’s interval’ due to the extreme dissonance.

Coming back to understanding music scales.

Now that we have an idea of our intervals, let’s go deeper into music scales and put notes together to form scales.

As a start, you’ll rarely use the chromatic scale. Most of the time in pop music, you’ll be using the major or diatonic scale.

We can find this major scale in a few ways.

Playing this on your keyboard; if we start on C note and follow that formula we have C, D, E, F, G, A, B, C – with no sharps or flats.

What are scale modes?

You might have heard of musicians talking about scales modes – which essentially just mean the note of the scale we start on. If we take the C major scale and play the same scale but starting on a different note, you’re essentially playing a different scale mode.

For now – focus on the basic scales before diving into modes.

The major scale has 7 notes and is known as the heptatonic scale. There are also scales with different numbers of notes. You may have heard of the pentatonic scale, which has only 5 notes and has been used by many cultures throughout the history of music.

The notes in a scale also have a name depending on where they are. Let’s take C major as an example again. The first scale note, C, would be called the tonic note. The other scale degrees have the following names:

These degrees and intervals all aim to show us the relationship our music has so we can convey the right feeling.

Another common scale you will see is the minor scale. It has the formula: W-H-W-W-H-W-W.

Notice on the Circle of Fifths that C minor will show the three flats, Bb, Eb and Ab.

Play C major and C minor scales right after another: You’ll find that C major sounds strong and positive, while C minor gives a sad, melancholy vibe. This is why major keys are for uplifting songs and minor more for introspection.

In the minor key, we have the same scale degree names except the flat 7 tone is called the subtonic instead of the leading tone.

There are many more terms that you’ll find out as you go deeper. But don’t worry, just use them as a reference. You don’t have to all of them overnight.

Now that you know the basics of scales, try to form scales of different keys and play them on your keyboard.

Notice which degrees of the scale are flat or sharp. Pay attention to the mood and emotions that different scales bring. What’s important here is to build a relationship with the scales and keep track of the ones you like for future use. (write them down)

Putting scales to use – playing and composing music.

The biggest use of intervals and scales is that once you understand them you have the basic foundation of your musical house. When you know the order of certain notes and the feeling it conveys, composing music will be easier.

Otherwise playing around with scales and experimenting is a great way to come up with a melody.

Pick a major or minor scale and a key you are comfortable with and start noodling around. Play the notes up, down, and in any order. Use different note lengths and a bit of good advice is to leave your DAW recording as you play, so you constantly jot your ideas down.

Scales are also helpful if you are improvising or playing a solo. Sure, you can add notes that are out of the scale in your melody, but as long as it falls back on the “safe” notes, you’ll be fine. That’s also one reason why pentatonic scales are so popular, 5 notes are easy to play!

The next step will be for you to start putting the notes together in your scale to make chords. Before you move on to chords make sure you have a solid understanding of intervals and scale, as chords share the same sound qualities and degree names.

As we put chords together, the Circle of Fifths will start to make more sense.

Music theory can be confusing if you’re just beginning. But don’t let this discourage you. As you practice and build a relationship with different scales and keys, you’ll begin to piece everything together. More importantly, give yourself time and soon enough you’ll be composing good melodies and producing world-class music.