Having some problems with Logic X. Music sounds loud and great when I’m mixing in Logic, but after the mixdown. The music sounds very soft in iTunes or in any other players. Why is this happening?

This is a common problem when you’re new in music production. Don’t worry though, every seasoned pro make this mistake as well.

You noticed that your music sounds quieter compared to commercial tracks on iTunes. And you then realize you can’t crank your system volume loud enough to hear your track in its full glory. Other commercial tracks you downloaded seems to sound louder than your track. And louder songs usually sounder better. Don’t worry though, this has nothing to do with your export settings in Logic X. It is actually a very important music production process called Mastering. In a nutshell, mastering is a post production process to ensure your music mixdown is loud enough, gets that extra sheen of ‘commercial-ness’ and sounds good on different platforms (clubs, halls, computers, headphones, phone, etc.)

Watch this video above to see how I made a music piece louder with some quick maximizing.

The Type Of Processing You’ll Do In Mastering

In mastering, equalization is considered one of the most important processing you’ll have to do. The best way to get quickly into EQing your tracks is to reference from other  tracks. The more tracks you reference, the better you will be able to EQ your track. A good advice from many producers is to listen to a reference track as much as possible, before even pulling up your EQ plugins on your mastering track. Izotope Ozone is an amazing mastering plugin that works in different DAWs as a plugin. With iZotope Ozone 6, you’ll get to copy a reference EQ from the reference track and then apply that EQ spectrum to your music. Although this won’t give you immediate accurate results, it does help a lot in learning and training sense.

While you might do heavy EQ-ing during the mixing stage, it is quite different when it comes to the mastering stage. In mastering, you’ll never push your EQ up or down more than 2dB or 3dB. If you’re pushing it that much, it probably means your mix isn’t solid enough and you’re better off to go back to the mixing stage. Many expert producers do this as well, so don’t worry. You’re not the only one.

Next up, compression is the next important process that is crucial in every mastering project. Many new producers get the misconception that compression is supposed to make the mix louder. It it the opposite instead. Compression is used to close the dynamic range gap, meaning the more compression you use, the less dynamic your mix is going to be. You can expect loads of compression done on music genres such as electronic dance music and pop, as those type of genres usually needs the music mix to be loud and pumping hard all the time.

When it comes to compressing the mix during the mastering stage, there are two types of compression tools you can look at. The single band compressor which is used to compress the whole mix and the multiband compressor, which is essentially four or more compressors which compresses selected EQ range, giving you more control over the overall mix sound. For example, you could choose to only compress and tame the bass spectrum of your mix and leave the top EQ range uncompressed. This can be achieved with a multiband compressor.

When mastering music, it is not enough to just look at the audio peaks. You have to watch the average loudness of your track too, if you want them sounding loud on different platforms commercially. See the image below for the difference between the audio peak and average loudness. Average loudness basically is the perceived loudness that your listeners will hear. A very common mistake is to have your peaks hitting the threshold, but your average loudness volume very low. 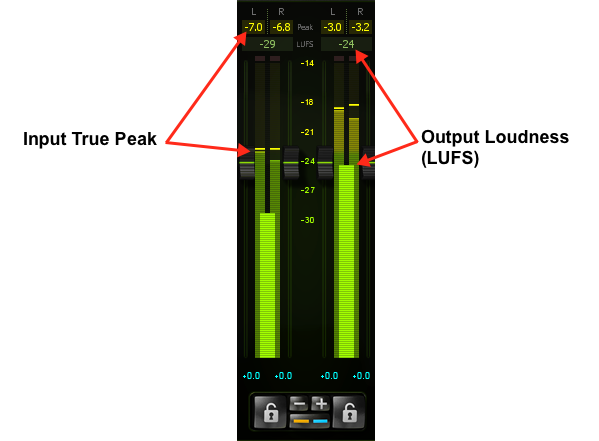 A great way to learn how loud commercial music are actually mixed at, slap on an RMS level meter like the one above, to analyze their levels. You’ll see in some cases, the average loudness of some electronic music can go as loud as -3dB. Pop music usually falls somewhere between -9dB to -6dB. In a nutshell, loudness maximizing is near similar to an adaptive limiter plugin where you use it to maximize the average loudness of your mix.

Can Mastering Be Done Yourself?

Absolutely. If someone tells you that you can’t do mastering by yourself, they’re wrong. With the increase of digital softwares available to indie producers these days, it really takes just loads of practice and experience to be able to master your own music. It also makes sense to get your music mastered by someone else, because you’re basically getting new fresh ears working on your music. That being said, it is possible to master your own music by yourself.