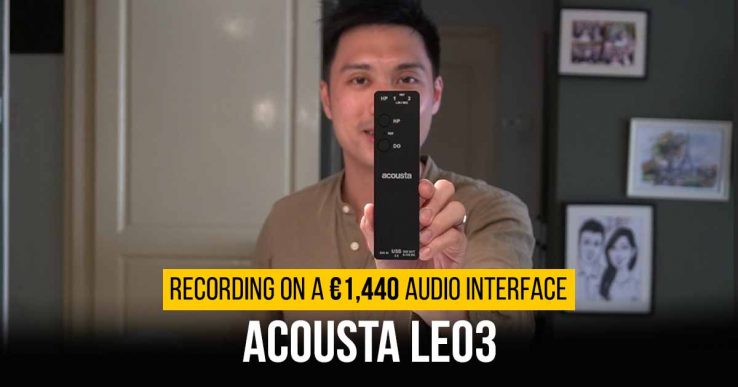 Most audio interfaces have quite common features.

With higher-end audio interfaces, they are usually built with better components (Neutrik/Amphenol inputs). Not forgetting the quality of its A/D and D/A audio converters, along with its pre-amp.

Late last year, I got my hands on a portable audio interface built with some of the best audio components in the world. But it was unlike any audio interface I’ve used before – the Acousta LE03, a high-resolution audio interface designed and made in Austria by Innovative Audio.

What attracted me to the interface initially was its small form factor – it had only two buttons for control, just about the size of a smartphone, and records up to a resolution of 192KHz/24bit.

The Acousta LE03 is a high-resolution audio interface – or more so a studio interface (you’ll see why later) made for musicians, studios, live-stream, or for on-stage setups.

Just like any audio interface, the Acousta LE03 is bus-powered and can be used with a smartphone (iOS or Android), tablet, laptop or computer, via USB-C. Otherwise, you can also use a simple 5V power adapter to power the interface and use it as a standalone outboard gear.

It promises a lot. 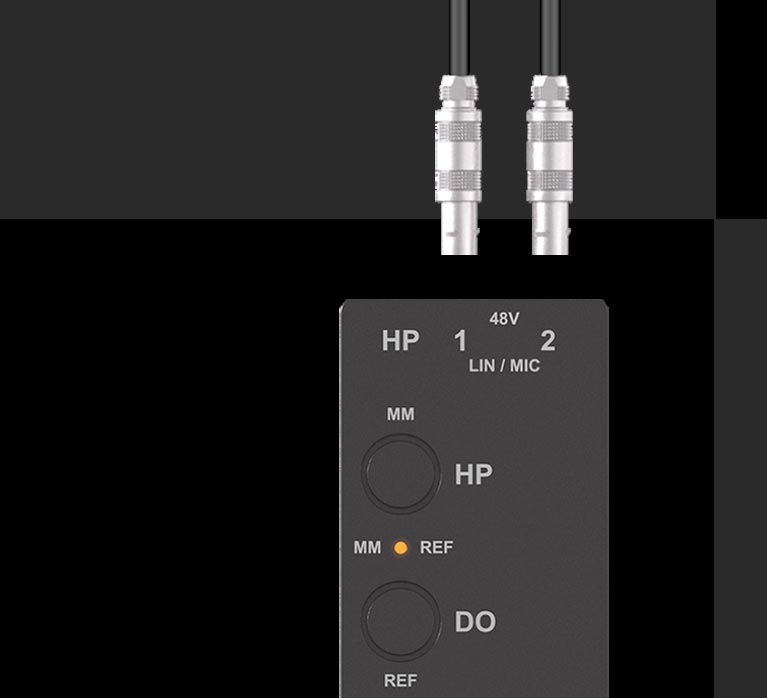 The Acousta LE03 accepts two microphone inputs. But the inputs are in fact LEMO inputs, so you’ll need the separately sold LEMO/XLR adapter to connect XLR microphones to the interface.

Why the use of a LEMO connector instead of XLR or mini-XLR? Well, most probably to maintain its small form factor as a portable studio interface.

What’s impressive is that the two-inputs are built with high-quality ADCs (Analog-to-digital converter) with a dynamic range of 160dB from noise floor to full scale – giving you lots of room for your sound.

Most standard audio interfaces like the Audient iD14 (image below) have a dynamic range up to 120dB. 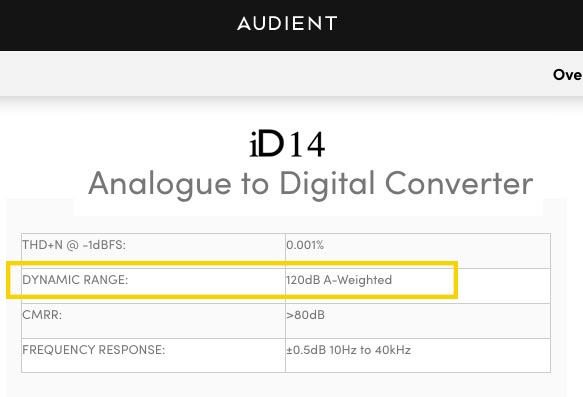 However, the LE03 has a dynamic range of up to 160dB. This means you technically have ‘more room’ for your audio, before getting distortion. This is why you could just plug a microphone into the Acousta LE03 and record away, without having to actually set up gain levels. According to Innovative Audio, this means when you record with the LE03, you get the full ‘actual’, undistorted sound character of the microphone you use.

During my own test, I plugged in a microphone and successfully recorded a vocal track without any clipping. However, I did find myself having to slightly change the mic levels to get the desired levels.

To further push the Acousta LE03, I set up a recording session to record a vocalist singing a music piece with a wide dynamic range. You can watch this in the video above, where I used the Lewitt LCT-440 PURE (also Austrian-made) with the LE03.

So just plug in a microphone. Flip the phantom power switch on if your microphone requires it. And record away without having to worry about clipping and distortion. 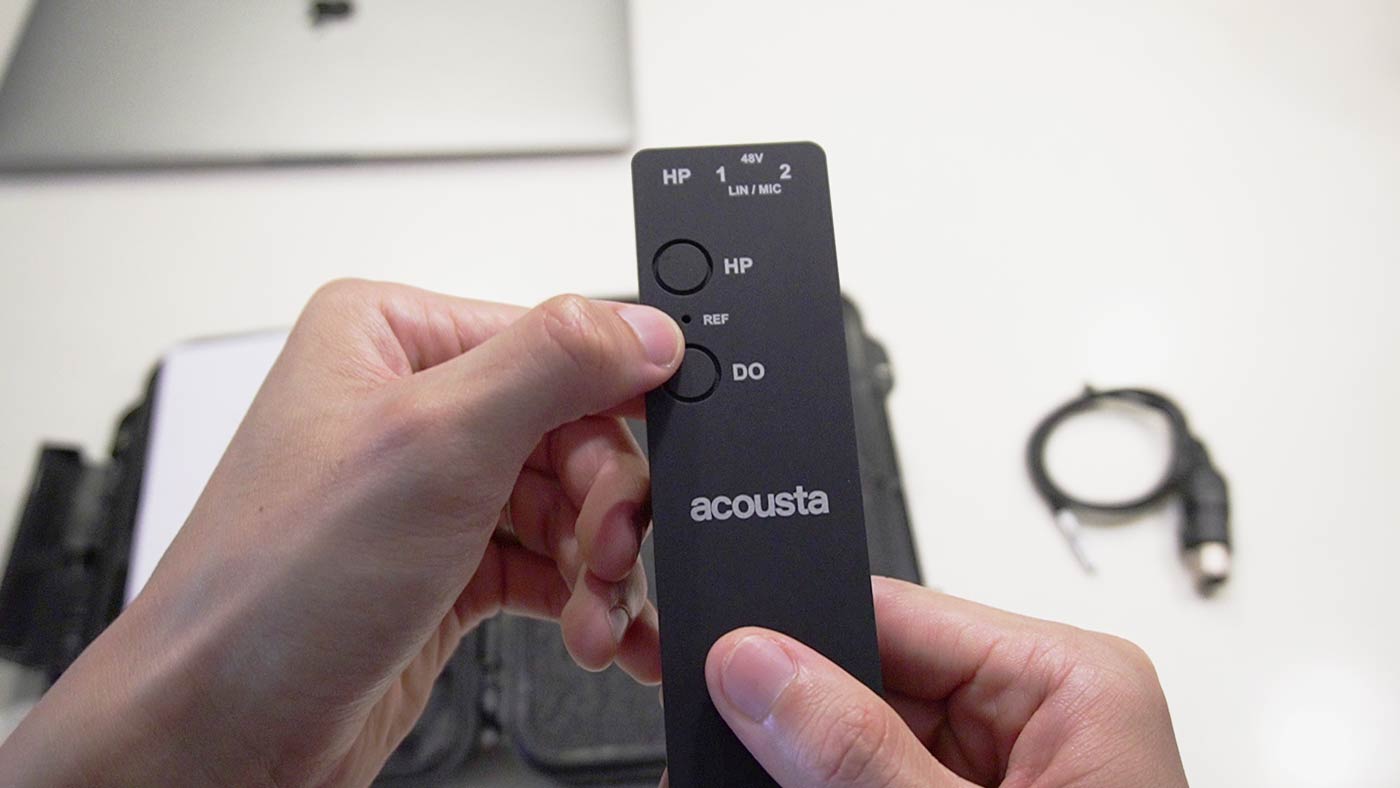 The Acousta LE03 had only two buttons.

Most audio engineers I know, love fiddling with knobs and gains. And you seen DJs do it too out of habit, even if what they do at that moment don’t add anything to their mix.

Here’s a fun video to prove my point:

Jokes aside – there are seriously only 2 buttons on the LE03. But they do pack some functions.

I found them to be a little confusing at first. But with some careful reading of the manuals, here are how the buttons work:

This sets the headphone levels. Keep the button pressed and the volume will increase by steps of 1dB. To decrease the volume, simply just wait a few seconds for it to switch into a decrease mode and press the button again (where now the volume decreases by 1dB stages.)

While I understand the design was made in consideration for its small and minimalistic form factor, I found its operation to be a little of a bother for me – especially when on other audio interfaces, it takes me no more than 2 seconds to turn a knob to increase my headphone volume.

DO stands for digital output, and in the same fashion as the HP button, keeping this button pressed changes the digital output (includes mic level) in 1dB stages.

If you keep the DO button pressed down, and plug in the USB cable, the interface will generate a 1kHz -9dBFS tone. Use this to check the connection between the interface and your computer or digital recorder.

The interface also works in mono mode. To do that, keep both the button pressed before plugging in the USB cable to a computer.

Quite simple once you learn them. Just note that if you are someone who is used to dialing knobs on audio interfaces and mixers – you will definitely need some time getting used to the LE03 button operations.

Class-D Headphone Drivers on the LE03

The Acousta LE03 is fitted with a Class-D headphone driver and high-quality DAC (Digital to Analog converter), so the sound you monitor is more accurate than ever.

To appreciate this, it helps to briefly understand the role of headphone amplifiers. Basically, the goal of a headphone amplifier is to reproduce digital signals back into analog audio, with the desired volume – as efficiently as possible and with low distortion.

There’s a whole lot you can read about Class-D drivers along with their advantages and disadvantages. But to put it bluntly, Class-D drivers have up to 90% efficiency rates, compared to Class A, B, or A/B drivers, making them ideal for low-powered devices like the Acousta LE03. 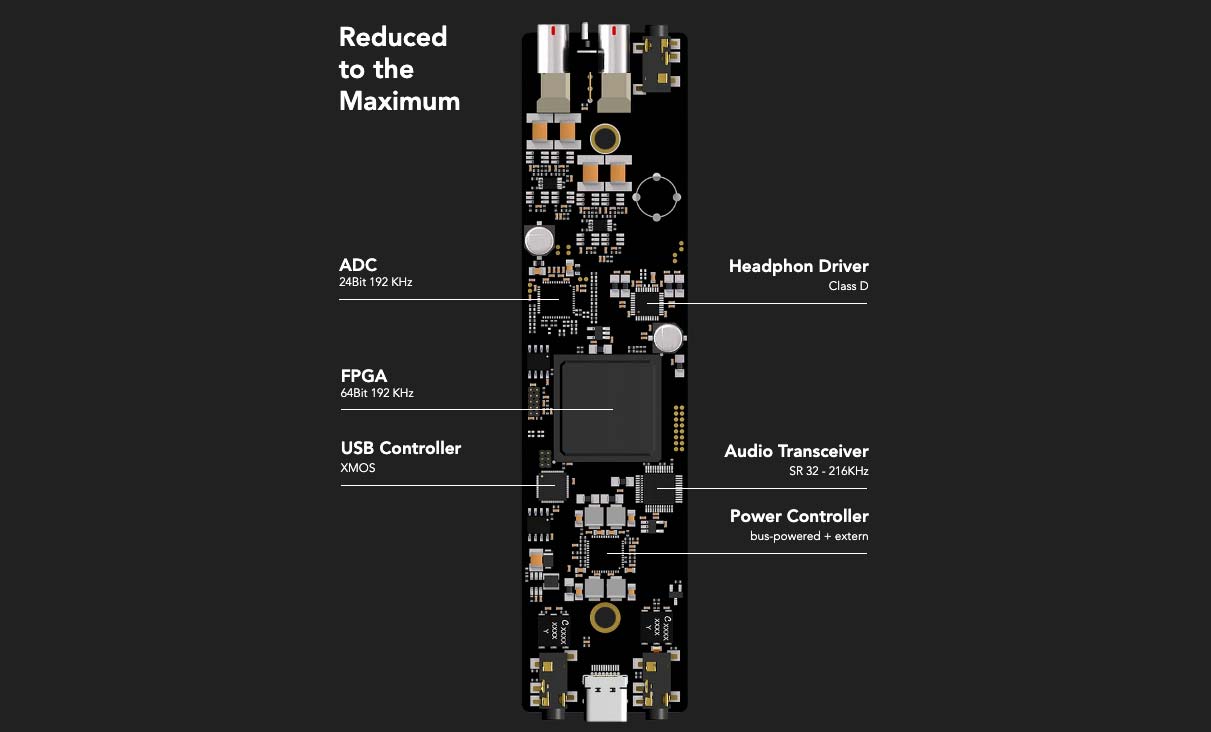 Putting the Acousta LE03 to Work

All that was said about the LE03 sounds great, but how would it fit into your work as a recording engineer or music producers?

Well, here are some ways to use it:

1 – As a portable audio interface: 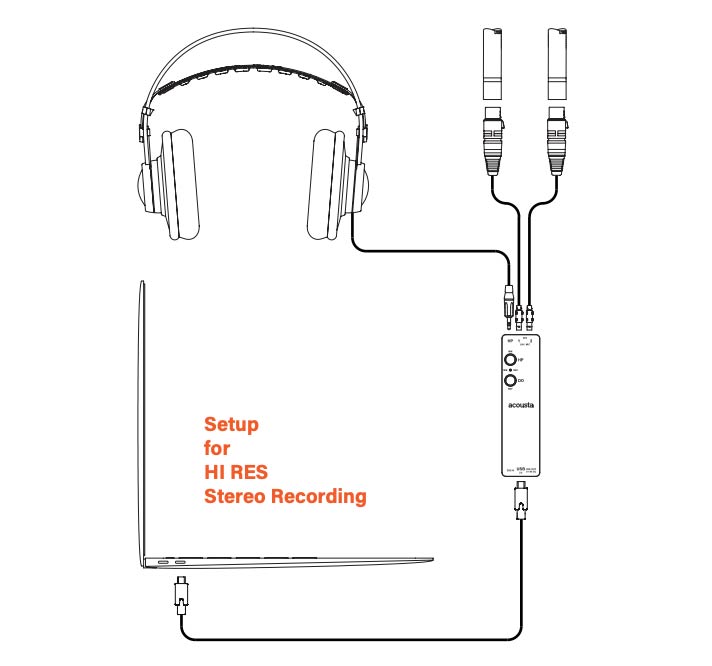 Because the LE03 is seriously small, it is ideal for musicians and producers who want a high-quality audio interface that they can carry around. Weighing no more than a smartphone, it’s certainly nice to be able to carry an extremely good sounding interface that works with any microphones.

Of course, you could use it in your studio as a secondary audio interface, making use of its high-quality analog-to-digital converters.

While the LE03 is designed to work as plug & play on your computer and smartphone, take note that certain apps on your smartphone might not support the high audio resolution of 192kHz on the LE03.

2 – As an AD/DA converter for audio mastering:

In a world of digital gear and plugins, why are there still mixing and mastering engineers who prefer working on an analog desk?

Perhaps they prefer the analog workflow, but there’s another reason why: running tracks through outboard analog equipment gives that ‘color’ and adds certain characteristics to their sound. The gear they use probably has some sort of tubes, transformer, saturation, or distortion.

At the end of mixing, every track will eventually be mixed down into a two-channel stereo main mix to export. The practice of combining these tracks into a main mix on analog gear is known as ‘analog summing’.

But that’s not all. From here, the mastering engineer will have to convert the analog audio back into digital audio for distribution.

This is where the Acousta LE03 potentially comes in. 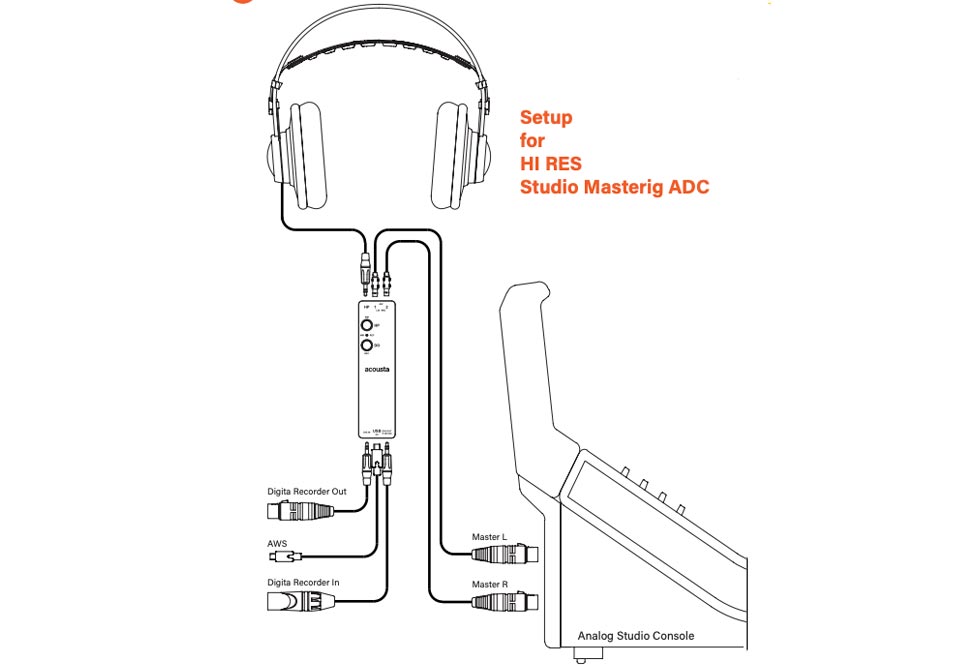 Mastering engineers can make use of the high-quality ADC (Analog to Digital) converters on the LE03, to convert the analog outs from an analog summing mixer or console, through the Acousta LE03 into a digital recorder or the computer.

3 – To enhance your microphone during a live-stage setup.

To get the most out of your microphone and achieve the best sound possible, it’s crucial that you pair it with a good microphone preamp.

The problem with most regular live-stage setups is that they don’t have dedicated pre-amps. So microphones are usually plugged directly into a mixer and the mixer’s onboard preamps are used. This works for the most part, but if you’re diminishing the sound quality you could get from a microphone, especially if you’re using a particularly good one. 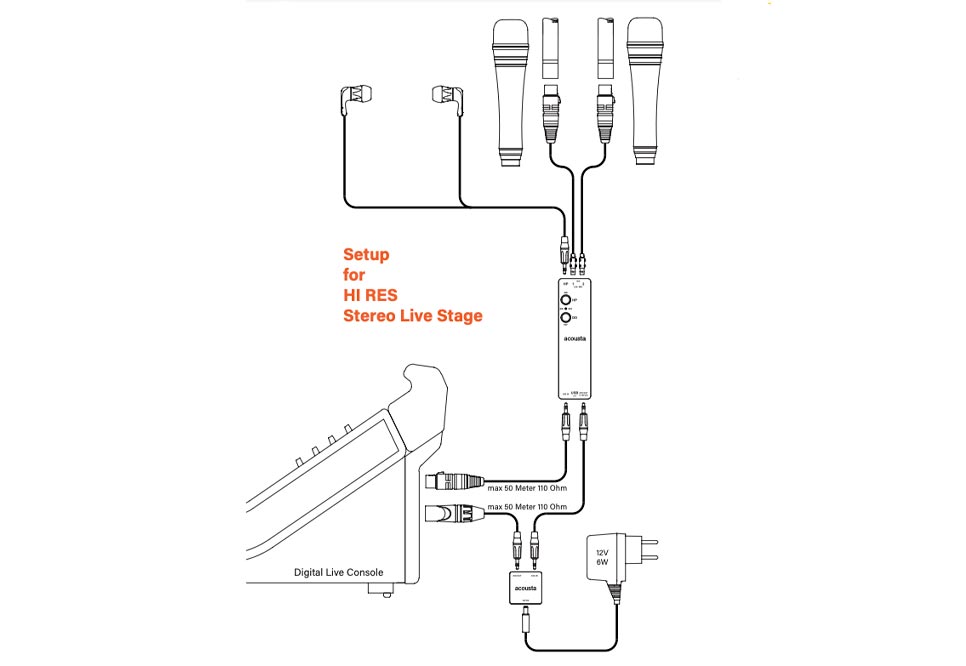 Having the Acousta LE03, means you can use it as a high-res pre-amp, in the link between your microphone and the mixer.

Is the Acousta LE03 for you? 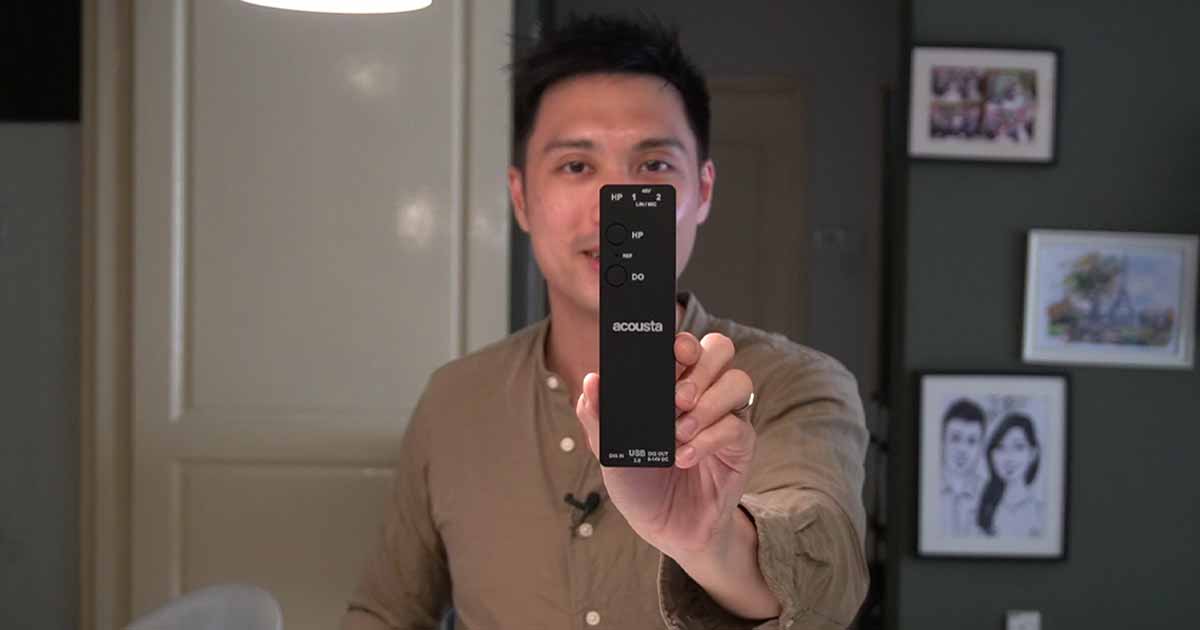 At a price tag of €1,440 it’s probably not made for a home-studio owner or an aspiring music producer. As a beginner, you probably get a better start with an affordable audio interface like the Presonus Audiobox USB or the Focusrite Scarlett series.

But if you’ve grown out of your gear and looking for something to further enhance your sound, then having the Acousta LE03 in your studio makes sense.

Let me turn the thought to you. What do you think of the Acousta LE03 and its sound? Let me know in the comment section below and discuss away!