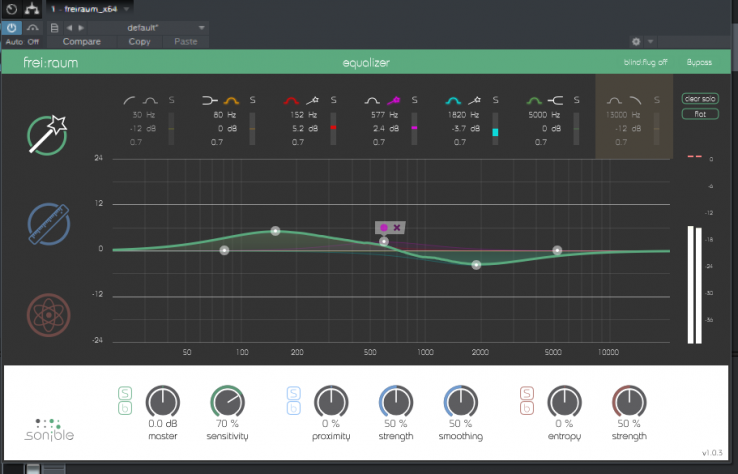 I’ve always wondered if people still need to make 3rd party EQ plugins, when there are already great EQ plugins built into most standard DAWs. When the makers of frei:raum EQ asked if I would like to review their latest EQ plugin, I thought alright, but what was I going to say? An EQ is an EQ right?

However as I took the time to test out frei:raum, I soon discovered that frei:raum is much powerful than your common EQ effect.

frei:raum is having an Advent Sale for the frei:raum with up to 47% discount. Click here to check it out.

Introduction To frei:raum by Sonible

Made by German company based in Graz, Austria – Sonible, frei:raum sounds like a queer name for an EQ plugin to many. Even I have a little trouble pronouncing the frei:raum (which you’ll see in the videos later).

Out of curiousity, I Google translated frei:raum to English to find out its meaning. I’m guessing at this point, but I think frei:raum means ‘clearance’ or ‘space’, which is a name that makes sense for the type of EQ it is.

A revolutionary plugin, frei:raum has three EQs built into one. They are the Smart EQ, Proximity EQ and Entropy EQ.

Smart EQ is a ‘smart’ equalizer that detects the problem frequencies in your track and then come out with a curve in your EQ, so you get the best frequency balance in your mix.

Proximity EQ is a spatial equalizer that you’ll use if you want to reduce reverb in your recordings or even to bring the track ‘nearer’ to the ear.

Entropy EQ is a very interesting equalizer that separates the in audio into inharmonic and harmonic, where you then freely increase or decrease at any frequency. In simple words, you can EQ the strike of a guitar strum while leaving the tone it produces, untouched.

frei:raum is a new way to sculpt and restore your recordings, watch the video I recorded below showcasing the 3 different EQs and also doing some automations with frei:raum.

Smart EQ is an interactive linear phase equalizer, which makes it perfect for mastering. Simply alt+click on the wand icon in smart EQ while playing your track and watch as the equalizer automatically detects problematic resonances and creates an equalizer curve that is otherwise impossible to create with any other types of EQ plug.

I found the EQ to be extremely transparent. The smart EQ was pretty spot on as well, addressing some frequencies that was lacking in my music (see video above).

With the curves in place, I was also able to to pull the bell curve around, finding a sweet spot. You can also solo each frequency band to hear what’s going on.

The smart EQ was very easy to use and is definitely a quick tool to find out problem frequencies in your mix. It does use quite a bit of your CPU though, my audio began to stutter at one point when I did an automatic detection on a track heavy project.

I was wondering if I really need proximity EQ when I have Transient Master by Native Instruments, being able to do near the same thing, to edit mix presence and positioning.

Using it on a drum with reverb, I found that the effect was a little less drastic compared to Transient Master but it was smoother (there is a smoothing dial as well) to increase the tightness of the drum track only on the frequency I chose. I’ve only played with it for awhile, but you’ll want to take Proximity EQ and try it on various types of recordings to really getting used to it.

Entropy EQ was one of the hardest to grasps as this is definitely a new way to using EQ. Basically the Entropy EQ allows you to separate the tonal and inharmonic sound from each other. This means, if you find a muddy guitar recording and want to increase the tightness of the guitar pluck, you can.

I tried Entropy EQ on the intro part of a song with a guitar and was able to increase the pluckiness of the guitar at a certain frequency.

It’ll take a while to understand Entropy EQ and use it to its fullest potential. If you do lots of acoustic recordings, you might love Entropy EQ, as it’s possible to save not-so-good recording by separating the attack and the tone of the instrument.

frei:raum is a solid EQ that takes signal processing to the next level. You do need a fast CPU to use it on heavy projects though.

Get frei:raum if you’re a sound sculpting freak, doing mastering and always finding yourself correcting recordings that were recorded badly.

frei:raum does have a 14 day free demo, so I’d suggest you download the free demo here and give it a try before judging it. I see myself using frei:raum for mastering and sound design purposes, so I’ll be keeping the plugin.