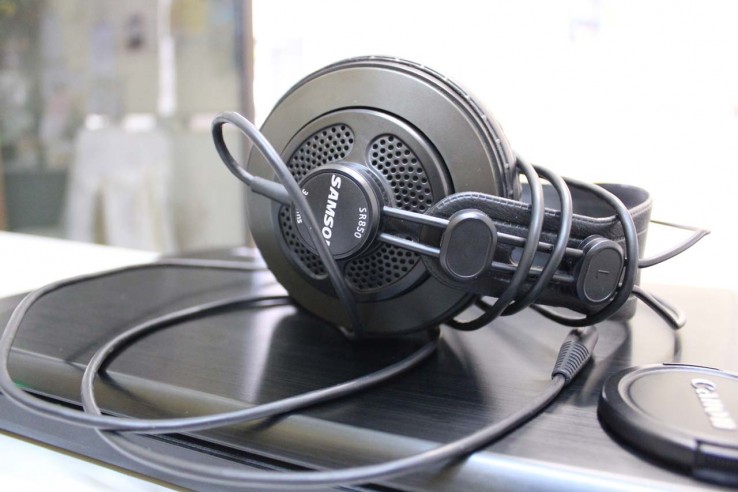 First off, I want to admit that I’m a producer who doesn’t like using headphones. I understand the benefits of using headphones in the mixing process, however I find myself expressing music better when I’m producing in front a nice pair of studio monitor speakers. So I use headphones occasionally to check my mixes and only when I absolutely must use them, for instance when I’m travelling.

Then again, this honest review Samson SR850 review has been long due and I must put them into writing now.

The Samson SR850 headphones came in a seemingly ‘china-made’ box. Not a surprise considering how much the headphones cost. Straight out the box, that’s all you get together with a mini headphone to 1/4 headphone adapter for professional use and a small product information leaflet.

The Samson headphones look near similarly designed like an AKG headphone, with sturdy metal bands which also makes the headphone literally an unbreakable one. 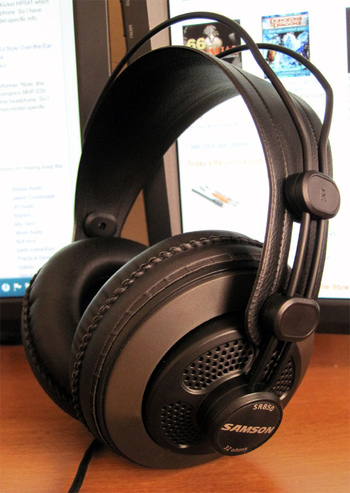 Bend the SR850 anyway you want it. It won’t break

The SR850 is a headphone with low impedance which means you don’t need an amplifier to run it, it should be loud enough for listening even on your phone. I do feel the volume could be a little louder though. The volume level does not go too high though many of you would want to avoid doing that to save your ears from getting damaged.

The headphones fits and feels alright, though you wouldn’t be able to compare it with other headphones which were designed to be comfortable on the ears. With some use, the tightness of the headphones gets more natural. I was able to slightly bend the headphone bands a little so that I had less pressure on my ears using the SR850.

Built as an open back headphone, this headphone is not made for recording but rather for mixing and monitoring. People would be able to hear what you’re listening to if you are listening on a little higher volume. This makes the headphone not so ideal for travelling, especially if you plan to do lots of monitoring in public like in train or plane rides. Having an open back architecture though does make the sound of the headphones to be more authentic and natural.

I was surprised when I first put the headphones on. It sounded big with a generous sound range. Perhaps it was because I wasn’t expecting much from a headphone which costs only $42, but I was impressed of the sound.

Musically wise, the SR850 sounded great for most types of music genres. I listened to music from the acoustic pieces to electronic beats and orchestral albums. The trebles have great detail and there was a full bass coming from the headphones. With the Samson SR850, I could quickly pick point problems from my mixes that I sometimes tend to misjudge when monitoring on speakers, so the SR850 would be real handy for checking your mixes.

I, however, find the SR850 studio headphones to sound a little thin. Don’t get confused about the word ‘thin’ though. The SR850 may have great sounding treble and a full sounding bass, but it lacks the ‘depth’ that is found on many other headphones. You’ll get used to the sound after using it for awhile, but before then I actually found myself mixing in too much bass and mids trying to compensate for the ‘thin’ sound I hear.

As for the frequency response claimed by Samson that the SR850 go down to as low as 10Hz and goes up to as high as 30kHz, I don’t think most headphones with 50mm drivers are capable of reproducing sound at that low of a frequency. Besides, the sound at 10Hz are usually ‘felt’ rather than heard.

Headphones alternatives to the Samson SR850

Who Should Buy The Samson SR850 Studio Headphones

Despite how well these headphones sound, I believe they will cater to only certain groups of people.

If you’re an audio snob or a die-hard audiophile, the Samson SR850 might sound unappealing to you. You are probably better off using the higher end headphones that has more depth. The SR850 is also not for you, if you’re thinking to use it to monitor music while recording. The open end build simply makes it not practical for recording. You’d want to find a closed back headphones for the sole purpose of recording to reduce headphone bleed to your microphone, even if closed back headphones sounds a little less natural.

Other than that, the SR850 studio headphones should be a nice headphones to use. I find the best uses for the headphone to be when editing recordings, checking my mixes or doing some mixing when I do not have the luxury of having studio monitors. Also if you’re a beginner in music production or just someone looking for better sound with a limited budget, the Samson SR850 should be ideal for you.

Check out the Samson SR850 Studio Headphones $42 – It’s really affordable. Who would say no?

What do you think about the Samson SR850? Comment below