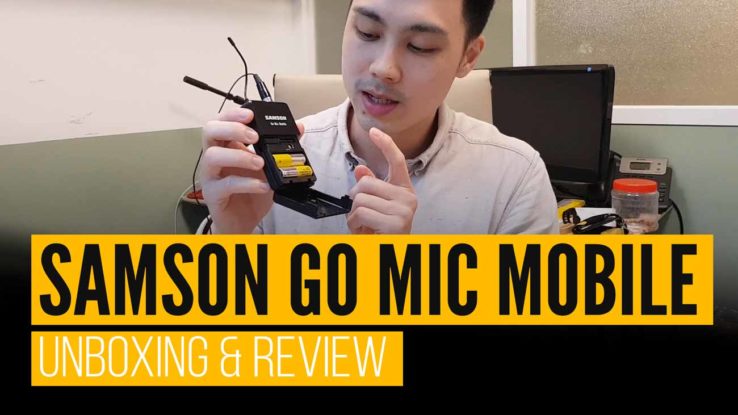 This is a Samson Go Mic Mobile review that I decided to write after using for a couple of months.

It took many tests (different recording environments, applications, etc.) for me to finally get the hang of using it efficiently, and I wanted to share my experiences.

Why I bought the Samson Go Mic Mobile

I initially bought the Samson Go Mic Mobile to use it for Facebook Live videos and to create content.

After all, the concept of how the Samson Go Mic Mobile worked was interesting. You can use it with a smartphone, DSLR camera or portable audio recorder. It seemed like a ‘fit-it-all’ microphone system and I was stoked!

Samson probably acknowledged the rise of recording and broadcasting on smartphones and decided to enter the market as well.

The Samson Go Mic Mobile is a wireless microphone working over a 2.4Ghz band that connects directly into a smartphone (both Android and iOS) via USB-C, lightning cable or micro-USB. That means you stream digital audio directly from the transmitter into a receiver that you plug into your smartphone – with no delay. 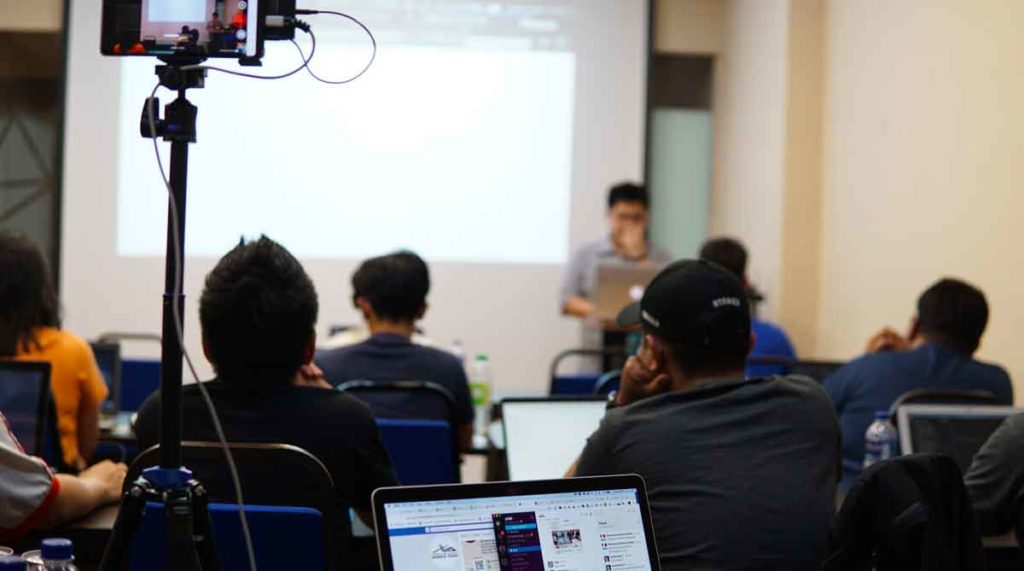 You can see the Go Mic Mobile plugged into to my smartphone on the top left in this photo.

Alternatively, acting as a ‘fall-back method’ when you are unable to use it with a smartphone, the Go Mic offers an analog output where you can output analog audio from the receiver into a mixer, DSLR camera or a portable audio recorder like the Zoom H5 or H6.

Just plug and record away

Depending on the set you purchased (ours was the one with the LM8 lavalier), you have your microphone, charger, cables, a transmitter and a receiver in the box. The box that it comes with it is quite flimsy, so if you’re purchasing it online, inform your shipping company to handle it with care.

Getting started with it was easy. Within minutes of unboxing, I was able to figure out where to plug the cables and begin recording/broadcasting right away. 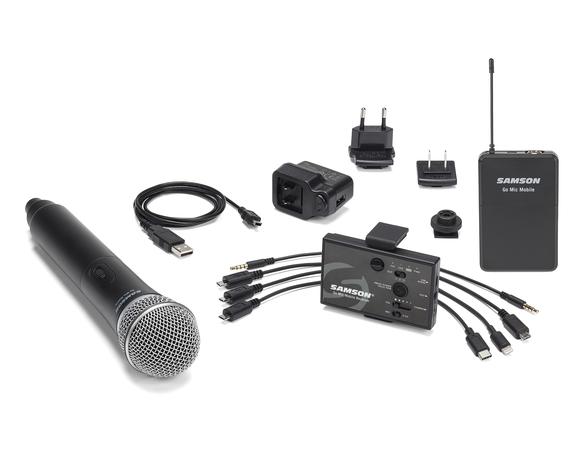 The cables that came with it, included a micro USB to lightning, micro USB to USB-C, micro to micro USB and a 1/8: audio cable for analog outs. With them, you’re pretty covered, whether you plan to record on an iPhone, Android phone or audio recorder. Connect it to an iPhone, iOS device with the lightning cable, Android devices with the USB Micro B/ USB-C cables, or use the analog audio output with a portable recorder. 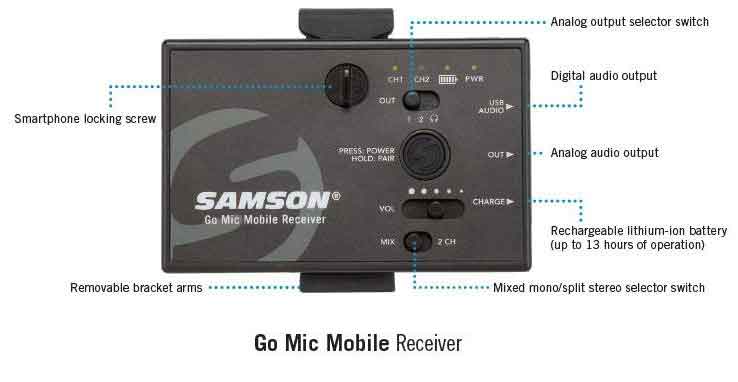 The package came with only one transmitter, but just like us, you can purchase an additional mic + transmitter and pair it with the same receiver, for a multi-person broadcast.

Using the switches on the receiver, you can then choose to mix the two audio channels together or keep them on separate tracks (left & right) where you can split them into two tracks in post-production.

You’ll find a few queer-looking mounting accessories that come included; bracket arms to mount on smartphones, hoop-and-loop fasteners for tablets, a shoe mount adapter for DSLR cameras and a 1/4″–20 adapter for tripods.

One thing immediately noticed upon putting my hands on the transmitter and receiver is its plasticky build. 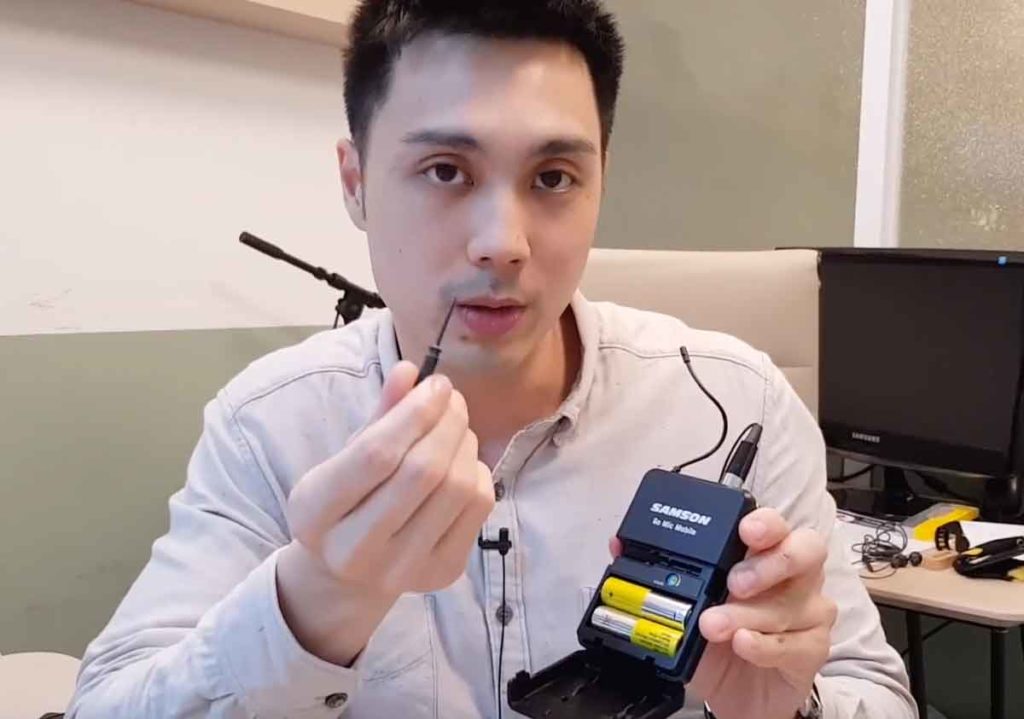 Let’s start with the transmitter. Compared to many standard wireless transmitters in the market – many of which are built rugged to withstand rough handling, the Samson Go Mic Wireless is completely made of plastic. You get a flimsy on/off switch which is located just above where the two AA battery fits.

And strangely enough, you would need to use a small plastic screwdriver (pinned in the battery compartment) to turn the gain dial up or down. Maybe Samson designed it to be hard to tweak because the gain settings here were meant to be set once and forgotten. 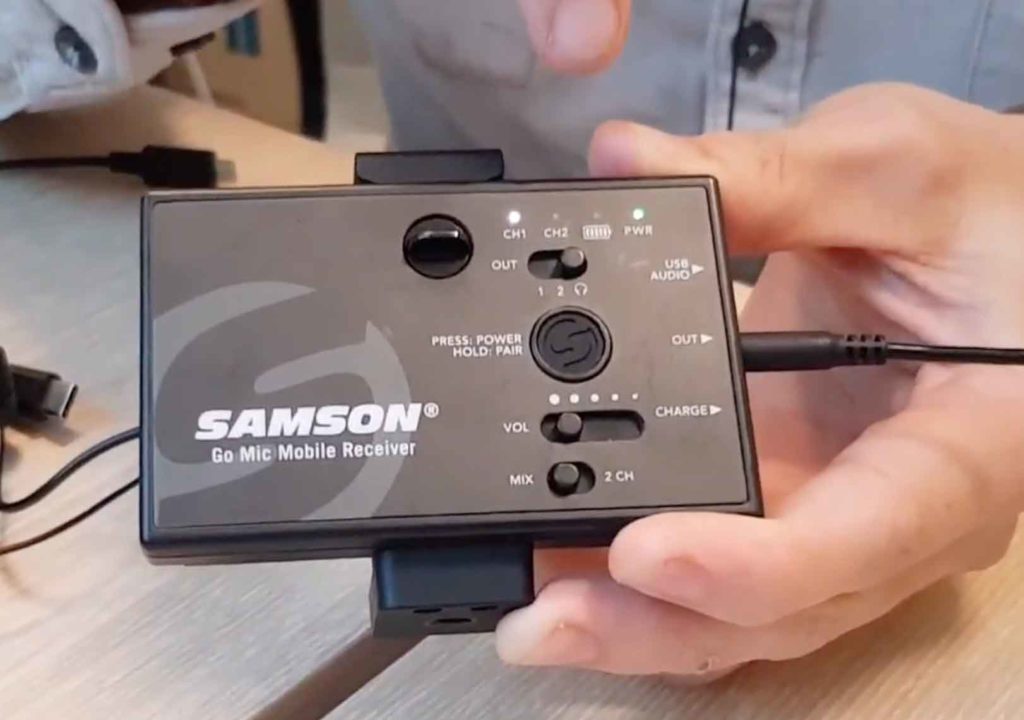 Attracts accidental pushes if you asked me.

On the receiver, you’ll notice that the interface isn’t exactly high-quality. The power button and gain sliders look like it would receive plenty of accidental pushes and I had fears over-screwing the locking screw, in the paranoia of spoiling its thread. Again the whole receiver is made of plastic and you want to be careful not to drop them on a hard surface.

Sound quality-wise, the Samson Go Mic LM8 Lavalier sounded usable and decent – at least for casual voice recording or broadcasting. But don’t count on it to record any music instrument with it. I would recommend you to use it for what its designed for, just voice recordings. 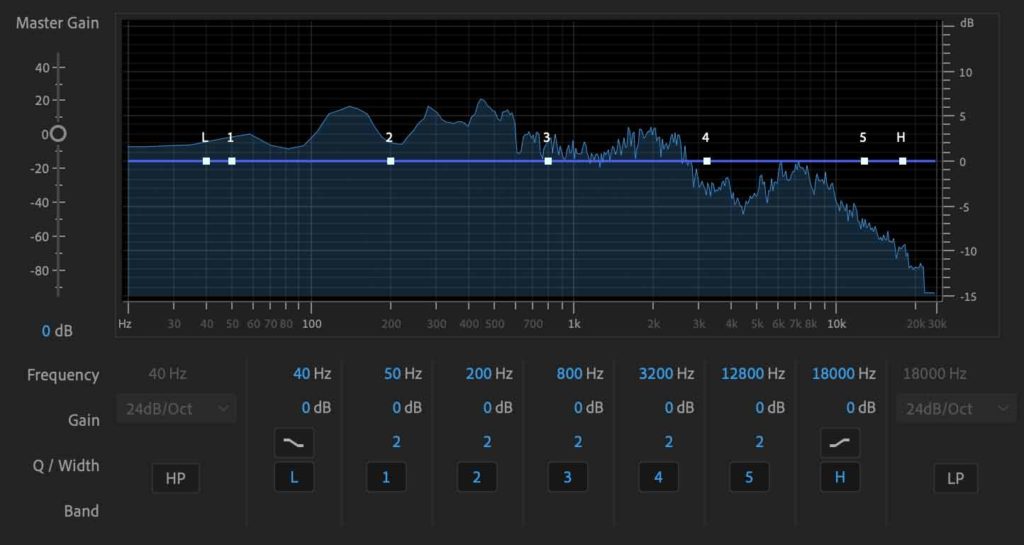 Skipping on what you see on the equalizer, here are my thoughts:

I felt that the lows on the LM8 lavalier to be a bit muddy and the lav mic lacks a bit of brightness. Comparing it with the Audio Technica ATR3350 lavalier microphone, another budget lav microphone – the Samson LM8 does sounds a little muddier.

This means to get the best of your recordings with the Samson Go Mic Mobile, you may want to reduce the muddiness by doing an EQ cut around 100-300Hz.

However, overall, the sound is usable and reproduces well on different speakers on devices like laptops, PA speakers and smartphones.

Some affordable lavaliers (for mobile phones) I use and recommend:

Note that you’ll need a TRRS to TRS adapter to connect lavaliers built for mobile phones to a TRS built devices, like an audio recorder or camera.

Not every app will detect the Samson Go Mic Mobile

Take note that not all apps on your smartphone will work with the Samson Go Mic Mobile. This is not Samson’s fault, rather some apps were never made with the intention to input signal from an external microphone.

On my Android phone, I had to record videos using Open Camera app and record audio using RecForge app to be able to detect the Go Mic.

It though worked beautifully with the Facebook app where I was able to go live with it. There was enough gain to boost the audio signal so that the broadcasted audio is audible. But you have to be careful of dialing too much gain, to an extent to clipping the signal.

Luckily, there’s an LED indicator on the receiver that turns red if the signal is too hot, which you can use to monitor as you broadcast away.

Unfortunately, I have not tested it much with an iOS smartphone – so it would be inaccurate for me to tell you if it works with most Apple iOS apps.

But put simply, if you are purchasing the Samson Go Mic Mobile, I would strongly suggest you to test recording it with a few video/audio apps on your smartphone before using it for something important.

The issue with the Samson Go Mic Mobile.

So far, it sounds like the Samson Go Mic mobile is a great wireless audio recording solution, right? Unfortunately not quite, as I found them to be.

Use the Samson Go Mic for a few minutes and everything seems alright. However, I began noticing frequent pops & drop-outs when using it for an extended time, over 10 minutes.

This was a deal-breaker that made the microphone system not reliable for serious broadcasting work.

At first, I gave the system the benefit of the doubt and started testing with different batteries, switching from different rechargeable batteries to different types of alkaline batteries. However, the problem persisted.

Reading online forums seems to suggest that this is an issue with the interference of the 2.4Ghz radio band that the Go Mic uses with other devices, like Wi-Fi modems, wireless mouse, oven, etc. that uses the same 2.4Ghz band within the space.

However, I tested the same setup within the same space using the RØDE’s Wireless Go (also on a digital 2.4GHz transmission) and did not notice any dropout, pops or intermittent issue. I concluded that the Rode Wireless Go was simply made better with better shielding and high-quality components.

Bottom line, expect a certain level of pops, clicks, and dropouts if you were to use the Go Mic Mobile for anything above 10 minutes or so.

Conclusion – Is the Go Mic Mobile Wireless worth a buy?

This is a tough question. As much as I like its concept and badly wanted it to work, the Go Mic Mobile fails to deliver itself as a reliable wireless microphone device. The drop-outs, pop & clicks may be negligible for short or non-serious videos. However, for real work, I wouldn’t be picking up the Go Mic Mobile.

Get the Go Mic Mobile if you’re a hobbyist looking for a budget wireless microphone system for short recordings and smartphone broadcasting work. Don’t buy if you need something to rely on for each video recording or broadcasting job you take on.