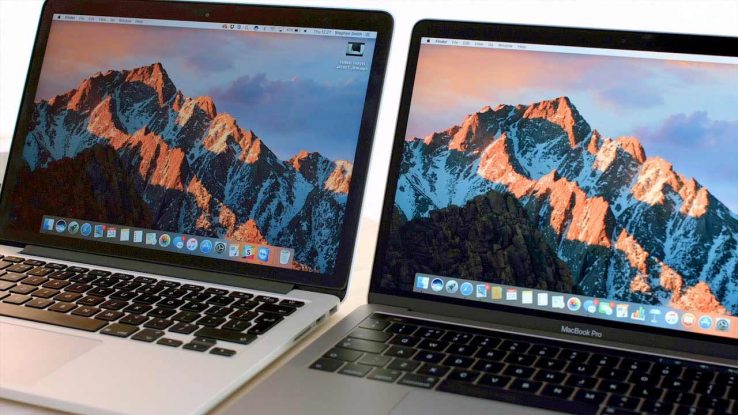 Why I Bought The Macbook Pro 2015 For Music Production

Before this, I was mainly making music on an Asus GL552VW gaming laptop, which itself packed a heck of a performance at a fairly decent price.

Why did I make the change? It’s all down to personal preference, but I finally had enough with the issues I was facing on my Windows laptop. Of the many frustrations I had, the two major pain points were because of blue screens I was facing (my laptop came with a faulty graphics card) & the fact that I always had to use an audio interface to make music, even if I’m not recording.

Part of why I made the switch is also because I was leaning back to using Logic Pro X.

But with that said, there’s nothing wrong producing facetime music on a PC vs a facetime mac.

Even composers like Hans Zimmer, compose with Cubase on a PC system:

So this post isn’t about Mac systems being better than PCs. In fact, they’re pretty much the same and down to your preference.

Bust the myth of the elitism that unless it’s a Apple computer you can’t play music on it. If it’s a laptop, you can make music on it.

I won’t talk about the design and the graphic the newer model has over, the older model since we’re mainly talking about functionality for music production. So first, let’s talk about the performance. 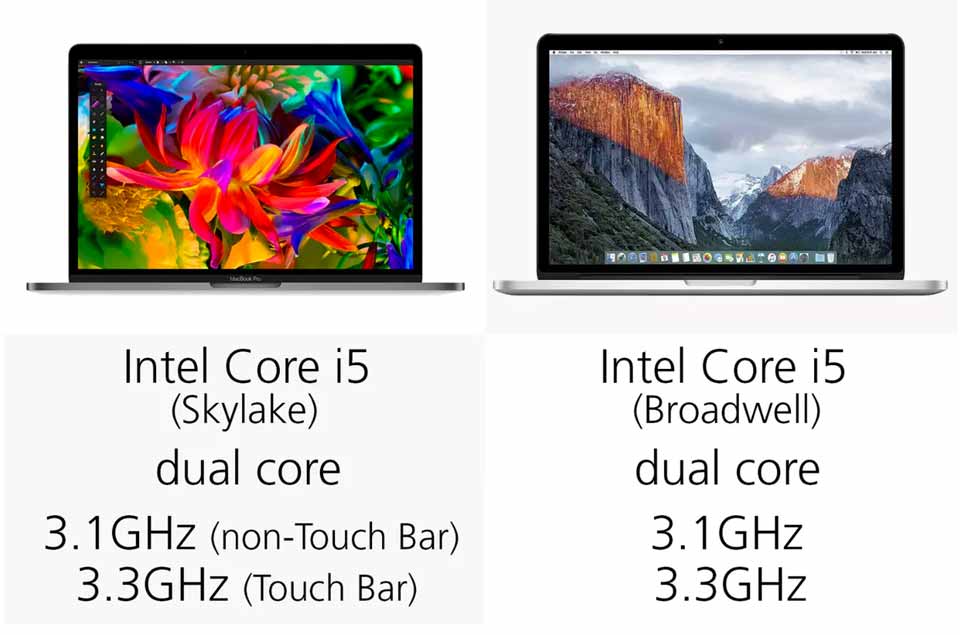 The SSD in the newer model is much faster than, the older version, with faster write & read speeds. This means starting up programs, and streaming tracks in your DAW would be snappier on the new Macbook Pro.

The small performance increment here wasn’t something that is worth paying more. That’s why on performance alone, I chose to buy the Macbook Pro 2015 model. 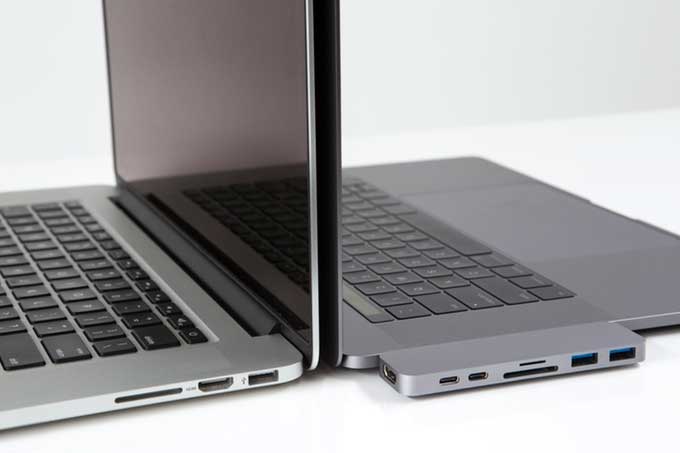 The number of available ports on the Macbook Pro is important for most music producers. Even on the Macbook Pro 2015 15″, I find myself running out of ports to use, given the many devices in the studio – from midi controllers, audio interfaces, hard disk drives, etc.

Buying the newer Macbook Pro model means I’ve to get a few sets of USB-C hubs to support all the devices that I need connected to the Macbook Pro.

You might call me silly, but I’ll guarantee you, there will be a time when you will forget to bring your USB hubs to a live performance or recording session. Not to mention, hubs can easily break too.

Call me old-fashioned, but I prefer to focus on the music and less on the nit-picky-ness of USB hubs.

I’ll be honest with you. I tried the touch bar in an Apple Store, and it felt great. I like how you could use it to quickly move around your DAW arrangement and tweak automation or filter knobs.

However, I don’t think that it’s a huge win that will make me consider throwing more money down for it.

It’s nice to have, but not something you’ll need.

Besides, I find that if you prefer controlling your DAW physically, consider buying some hardware controllers. They’ll give you more musical inspiration, and I guarantee you that they’ll work better for music producers like us.

Here are some recommended DAW controllers:

A control surface with motorized faders to control your DAW & plugins. Set up fast with quick auto-mapping features with major DAWs, such as Logic Pro X, Cubase, Pro Tools & more. 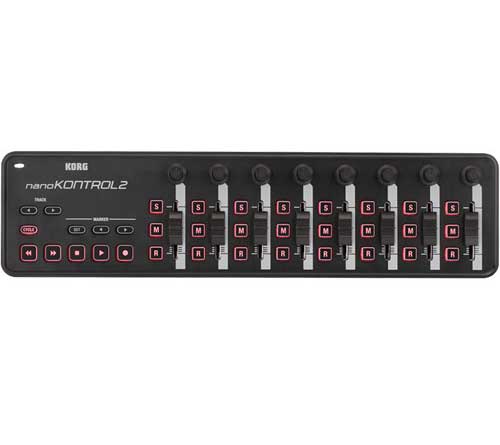 An inexpensive and compact DAW controller that provides you with 8-tracks to control major DAW software. The slim designed nanoKontrol makes it easy for placement even in front your laptop.

Featuring 9 touch-sensitive motorized faders to control your DAW, instruments and plugins. It connects to your Mac or PC, while also working as a MIDI interface, should you need to plug in any MIDI devices.

The lack of key travel on the new MacBook Pro 2016, is a huge disappointment. Other than making music on the computer, I also write a lot.

Having tried the new butterfly keys, I immediately felt that I needed an external keyboard. I don’t see myself writing a lot with the butterfly keyboard. It felt like tapping on a solid touchscreen and was very hard to get used to.

Not to mention, typing on the butterfly keys are also much noisier. Perhaps it’s time to disturb your co-producers in the studio with your loud typing. 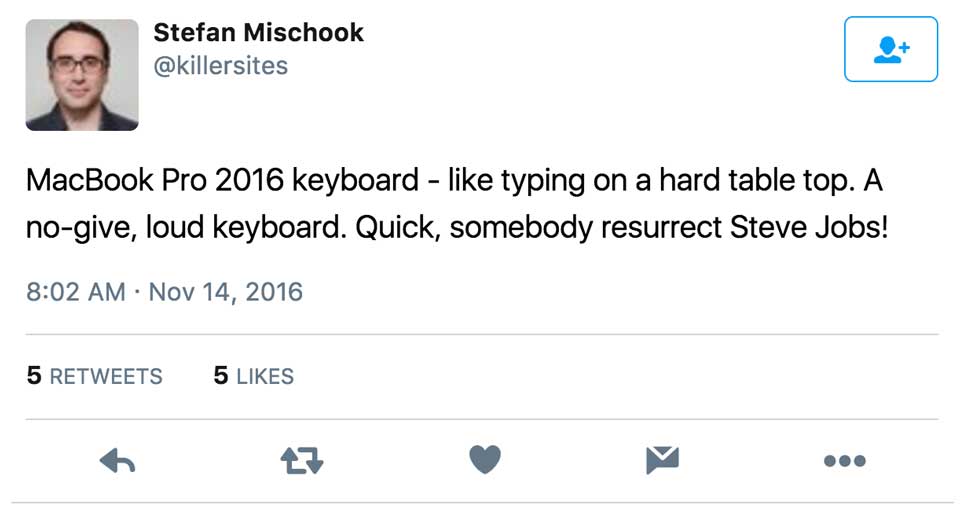 I felt the keyboard on the earlier model was much more functional & so I’m staying more productive with it.

When Apple launched the new MacBook Pro 2016, they dropped the price of the 2015 model.

This seemed like a no-brainer to get the 2015 model at a price drop, given that performance impact in the new one was not too significant, and when producing music, you’d definitely need more ports.

You get as much as $300 savings on the MacBook Pro 2015 that does near the exact same thing as the newer model, so in my case, I see why not.

I intendedly missed out on many details that could make the Macbook Pro 2016 more appealing to you, such as the smaller size, touch ID & Apple Pay and the bigger storage.

However, the reason I left them out was that I felt they don’t make any significant difference to how you would record & make music.

It’s probably a bad time to buy a MacBook Pro currently & it has been advised that you should wait for the next MacBook Pro if you can wait. As for myself, I needed a new laptop, so I took the jump and went for the 2015 model.

Which MacBook Pro model are you using to make muic now? Would you have bought the 2015 or 2016 model if you were in my shoes? Let me know by commenting below.