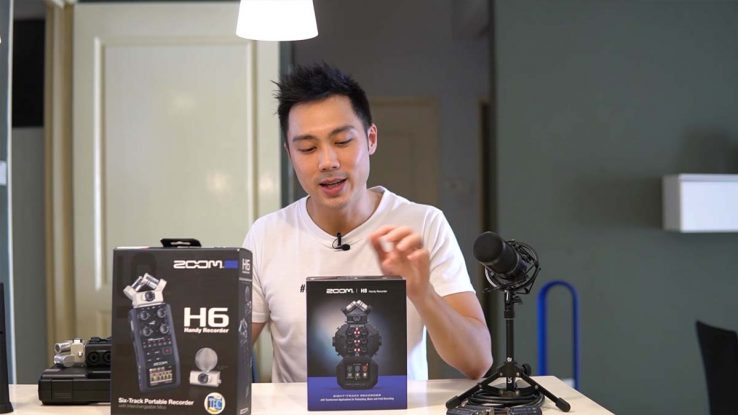 Around 15 years ago, in the year 2006, I took up my first music arrangement classes at a local recording studio. Computer-based music production was just starting to hit the mainstream market and things were exciting.

I started arranging music in the box with Logic Express 7, and before long, realized I needed to record instruments and vocals.

But as a student at that time, I had a limited budget, so I wanted a microphone that could do it all.

Enter the Zoom H4 Handy Recorder (has since updated to Zoom H4n Pro) – a portable audio recorder with built-in X/Y stereo condenser microphones that also works as an audio interface. 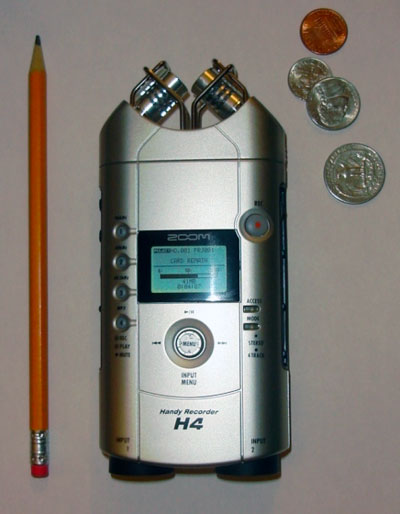 However, it wasn’t without faults. The onboard mic pre-amps were a little noisy, and you had to press lots of buttons to operate it. Eventually, the jog dial failed to work. And using the Zoom H4 as an audio interface with my Apple iBook G4 laptop, somehow always presented me with static hums and ground loops.

Fast forward to today, we have the Zoom H8 handy recorder. The Zoom H8 is a bigger version of the H4 and the H6, built with more inputs & outputs, better ease of use, and even adds on useful podcast functions – to cater to the demands of creators today.

Watch the video below to see the Zoom H8 in action:

At $399 retail, the Zoom H8 handy recorder is an attractive buy. Compared with competitive products, it offers more features such as 8-input channels (12-tracks with backup recording), phantom power for 4 inputs, interchangeable microphone capsules and it records up to 24-bit/96kHz audio in WAV and a variety of MP3 formats.

It also works as an audio interface and you operate it via a touchscreen interface, choosing between 3 apps for different use cases – Podcast App, Music App & Field App.

The Zoom H8 comes with the Zoom XYH-6 microphone capsule, AA batteries (for testing only), and manuals (yes, you would have to buy your own SD card). But unlike its earlier predecessors, the Zoom H8 does not come with a carry case or pouch – which I thought was weird, since it’s meant to be portable.

You will also notice that the Zoom H8 is built with a different type of plastic (the hard type). While the earlier Zoom H6 could withstand drops and bumps, the Zoom H8 feels like it’ll crack upon any accidental drop from the table – so be careful with it.

I thought the build of the H8 was a little odd (like a spider). And it’s also quite bulky and it feels weird holding it. Mounting it on top of a DSLR camera or carrying it in a bag for run and gun field recording might be awkward.

Operation-wise it was easy to figure out the Zoom H8, without having to dig into the manuals much.

The Zoom H8 can be powered with 4 AA batteries, a power bank, or USB-powered (USB micro-B). The XYH-6 microphone capsule sits on the Zoom mic connector, with 4 XLR inputs and 2 XLR/TRS combo jack on the sides. 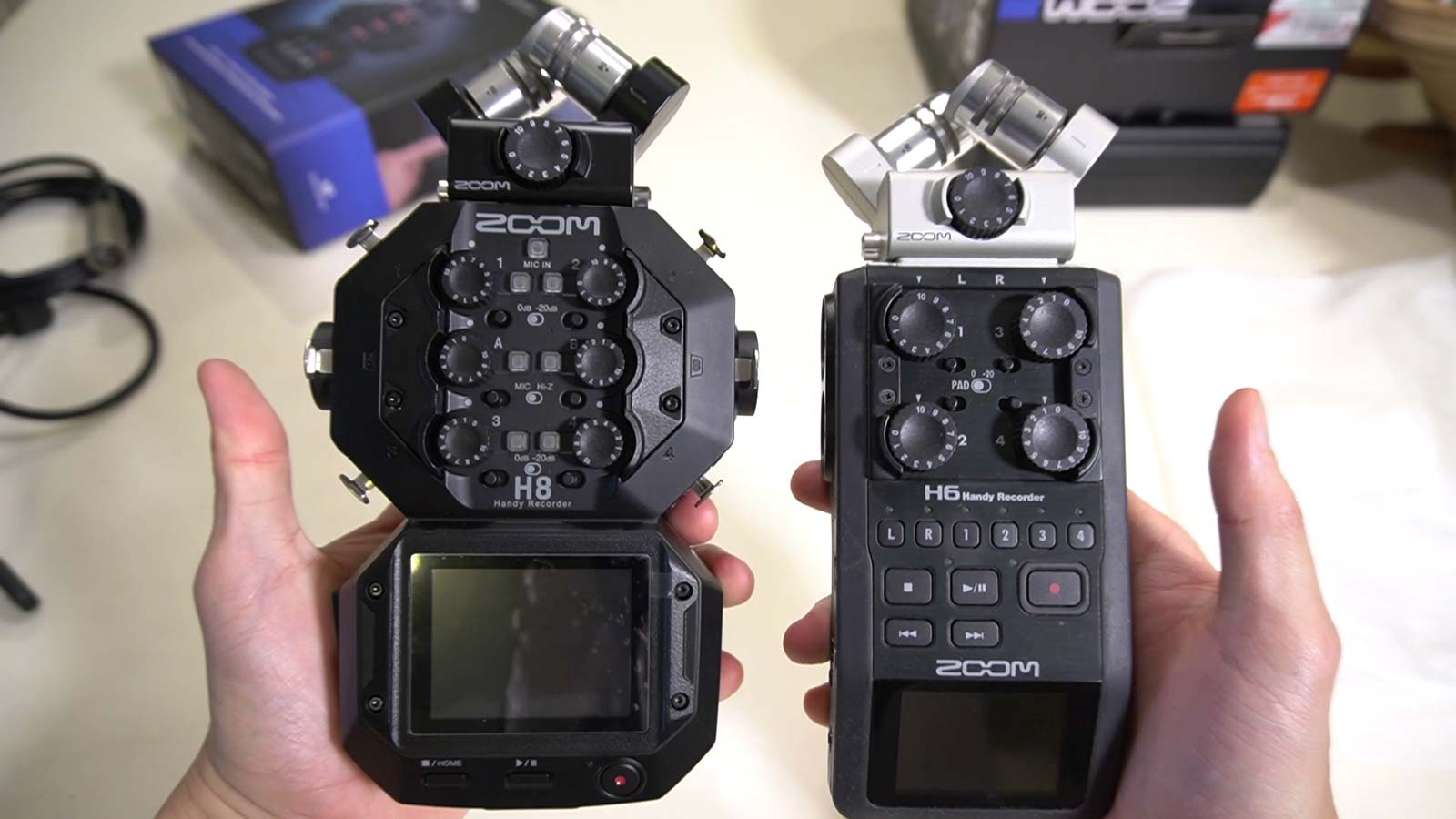 The mic pre-amps sounded neutral and had enough gain for most recording situations. I did, however, find it to introduce some noise with higher gain settings. If you decide to plug in something like a guitar or run your microphones through a pre-amp, make use of the 2 XLR/TRS combo jack on the side.

Each of the inputs has its own dedicated gain dial which looks like mini knobs when compared to the older Zoom models. Then we have the mic track enable/disable buttons, and pad switches.

On its sides, you’ll find the SD card slot which allows storage cards up to 512GB, a line-out jack, phone-out jack, remote connector jack for the optional BTA-1 adapter, and the USB port.

And on the back, there’s a small built-in mono speaker, definitely not used for monitoring but for quick checks without having to plug in a pair of headphones.

Two quick things to point out so far: 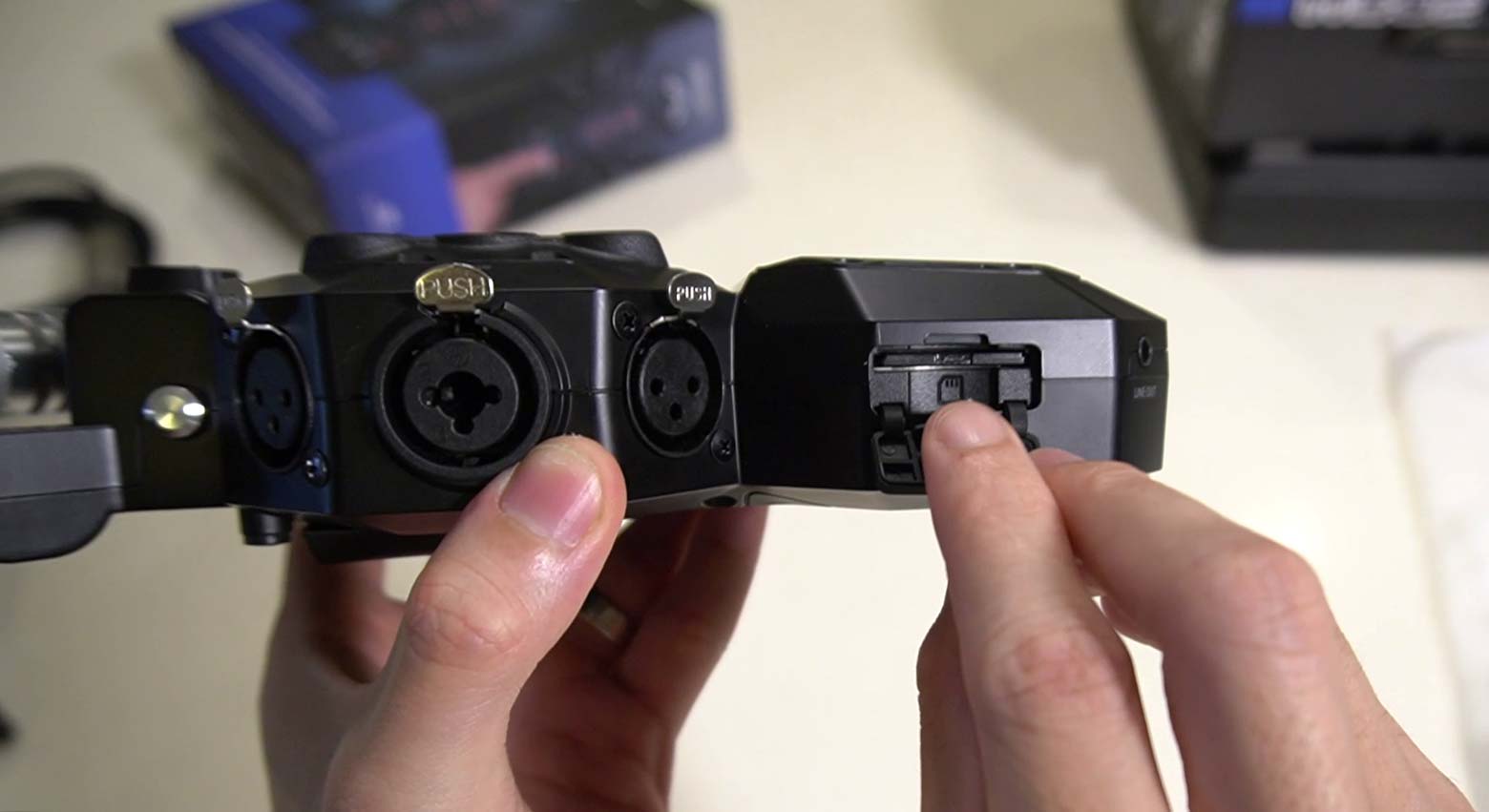 You can rotate the individual mics on the XY mic capsule to record at a wider stereo width, to record in a recordings situation that has a wider soundscape such as recording a quartet performance, ensemble rehearsal, or doing field recording.

What I liked about the XYH-6 mic capsule is that it has a mic/line-in input jack with plugin power, that I could use to connect an external microphone, such as a lavalier microphone.

This is a big deal – due to the fact that there are still many cameras and portable recorders that don’t provide plugin power. (although they should.)

This is why some lavalier microphones have battery slots, in the case you were to use them with a recorder that does not support plugin power.

Most tiny lavalier microphones are electret condensers, which would require power. Here are some lav mics that need plugin power:

And one that does not need plugin power (has a battery slot):

During my test with the Zoom H8, I didn’t manage to test the optional BTA-1 Bluetooth adapter, that, once connected, allows you to control the H8 remotely on an iPad using the H8 control app. 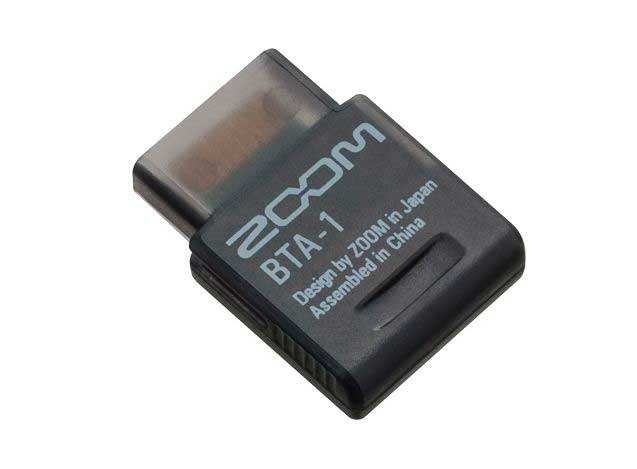 Although, the H8 control app doesn’t do much other than enabling you to monitor the input levels, start/stop recordings and enable/disable channels. It’s more designed to be used as means to start recording remotely (up to 10 meters) without having to touch the H8.

So don’t expect to have the full suite of functions on the app. Also, the H8 Control app is only available for iOS devices, so if you’re out of luck if you’re using an Android smartphone or tablet.

For me, I wouldn’t spend the extra $29.99 on the BTA-1 if using it with the Zoom H8. I think Zoom should have built a Bluetooth module right into the H8.

Ease of use of the Zoom H8 – The Three Applications

Compared to the earlier Zoom handy recorders that relied on jog dials to select functions, the Zoom H8 features a new way to operate – with a fairly straightforward touch screen. 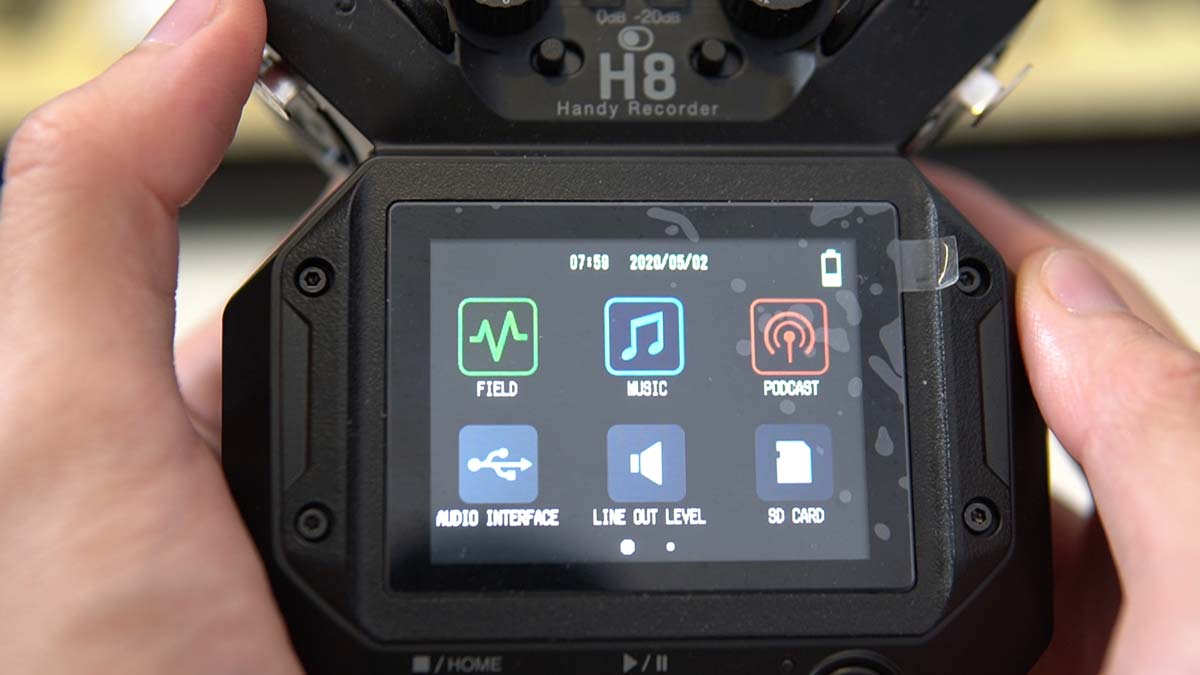 What stood out most for me is the ability to quickly increase or decrease the monitoring volumes using the touchscreen, compared to having to frantically press buttons multiple times on previous predecessors.

This is a function that’s new with the Zoom H8. Selecting the podcast app launches functions to record up to 4 microphones, including having an input from a music player or phone into the XY mic capsule – simultaneously.

On the touchscreen panel, there are 4 programmable sound pads that allow you to play sound effects in the midst of your podcast – which was quite neat. 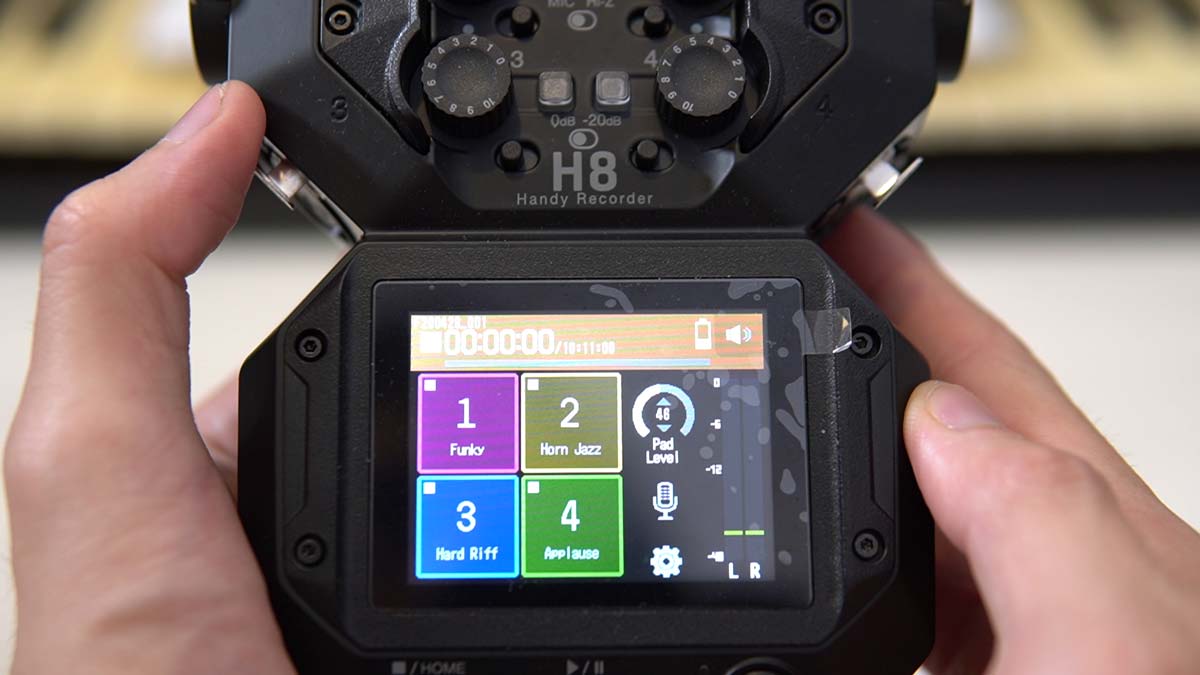 You could use the podcast app as a means to record a podcast session, or as a live mixer/pad for live-streaming. To do live-streaming, line out from the Zoom H8 into a mixer or streaming device, like your smartphone.

Note there’s only one headphone out on the Zoom H8. That means you’ll need to buy a headphone splitter or microphone pre-amp if you’d like to have more headphones during a podcast recording. You won’t be able to drive independent headphone outs with the H8, like you can with the PodTrak P4 (See video below):

This is what you’ll use for field or location recording work. This mode gives you access to larger meters for every track (XY mic and inputs 1 to 6) since monitoring them would be crucial. 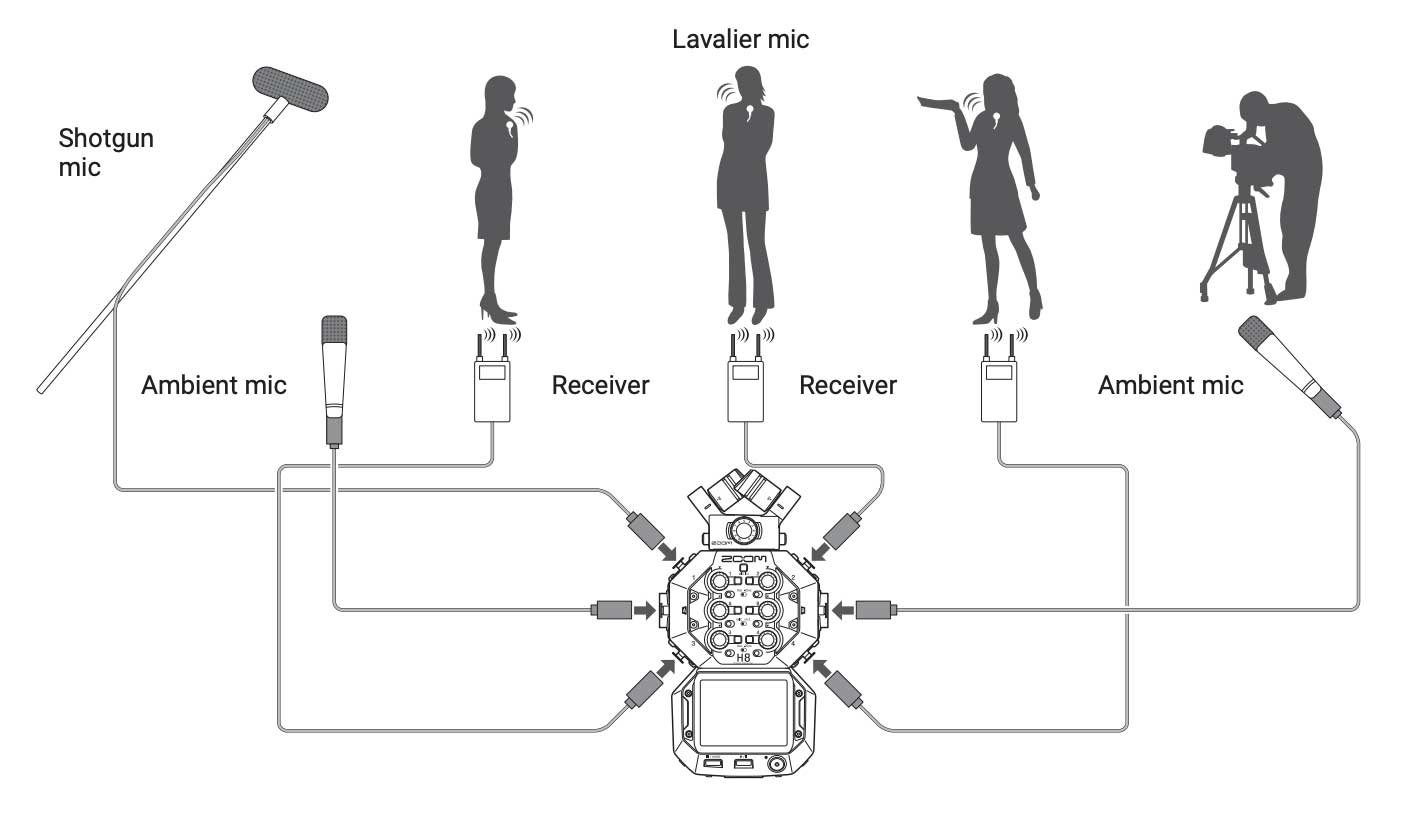 You can also insert lo-cut, compressor, limiter effects, and noise-gates to each input separately, giving you the ability to control your recordings, making sure it doesn’t clip.

A nice feature enabled on the field app (and the podcast app) is the backup recording, where a backup file will be recorded at 12dB lower than the input level you set. This is a life-saver if your main recording ever got distorted during a live recording.

The music app is used for multi-track recordings, especially when recording a band. Essentially you have up to 8 inputs, including the onboard mic capsule. However, you can increase up to 10 XLR inputs, if you were to use the optionally supplied EXH-8 mic capsule. 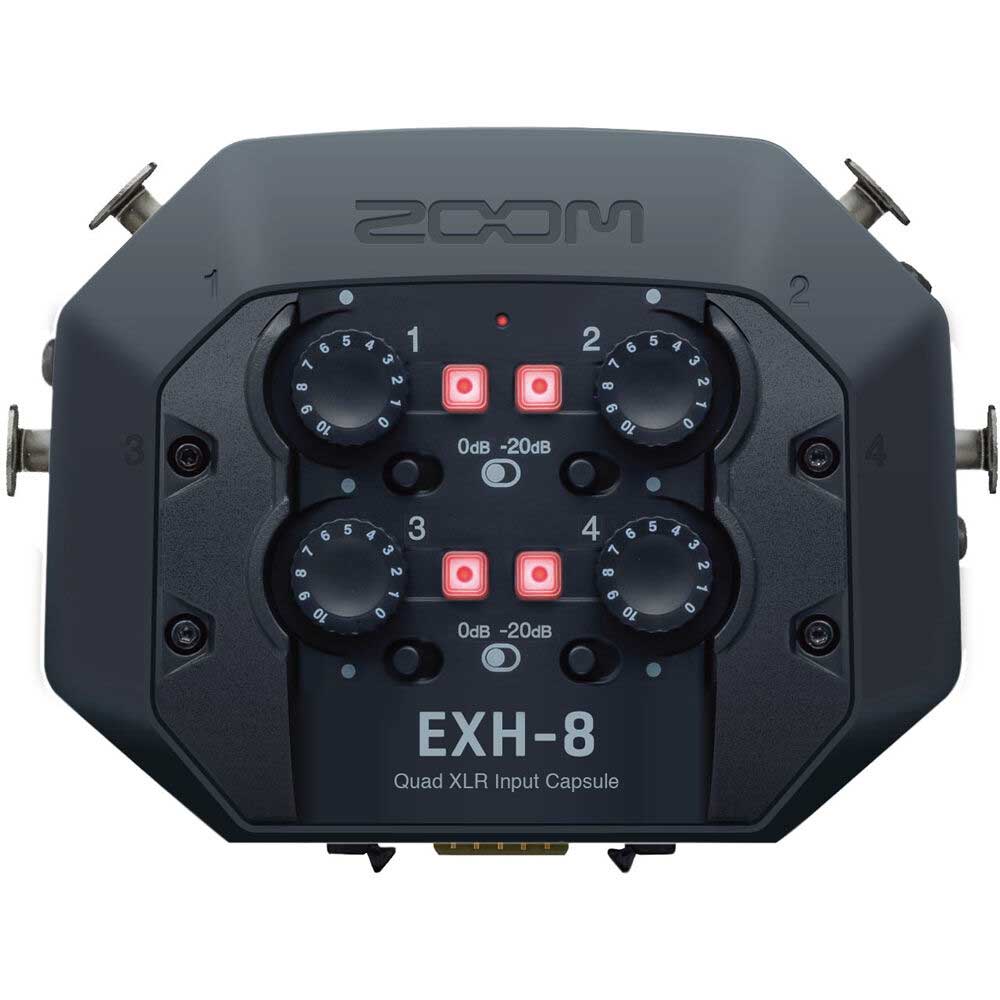 The EXH-8 input capsule. (Not shipped by Zoom yet, at this time of writing.)

Under this mode, you have access to equalization and effects such as compressors and limiters. You could also connect the Zoom H8 via USB to make use of the guitar amp effects in Guitar Lab.

The music app mode also provides you a punch in/out function that you can use to re-record parts of recorded tracks you have on the H8. I usually prefer to do punch-in and outs on a DAW, as I can visually see the tracks – but again, this would be useful if you plan on recording solely on the recorder.

Using the Zoom H8 in action.

My experience using the Zoom H8 was good. The recorder was responsive, and I didn’t find myself digging into the manuals. Everything was straightforward and easy to understand.

I also like that the touchscreen made it easier to navigate and control things, where I especially found it faster to increase or decrease the headphone outs, compared to having to physically press the volume up & down buttons on the previous Zoom H6.

The only complaint I have with the touchscreen is that you might miss-tap a few things if you have huge fingers. Also, I have not tested this – but having the touchscreen might also cause the H8 to use up battery power faster.

As someone who spends more time in the studio, rather than moving outdoors, I find myself using the audio interface mode more often. This is where the Zoom H8 also shines as an audio interface. 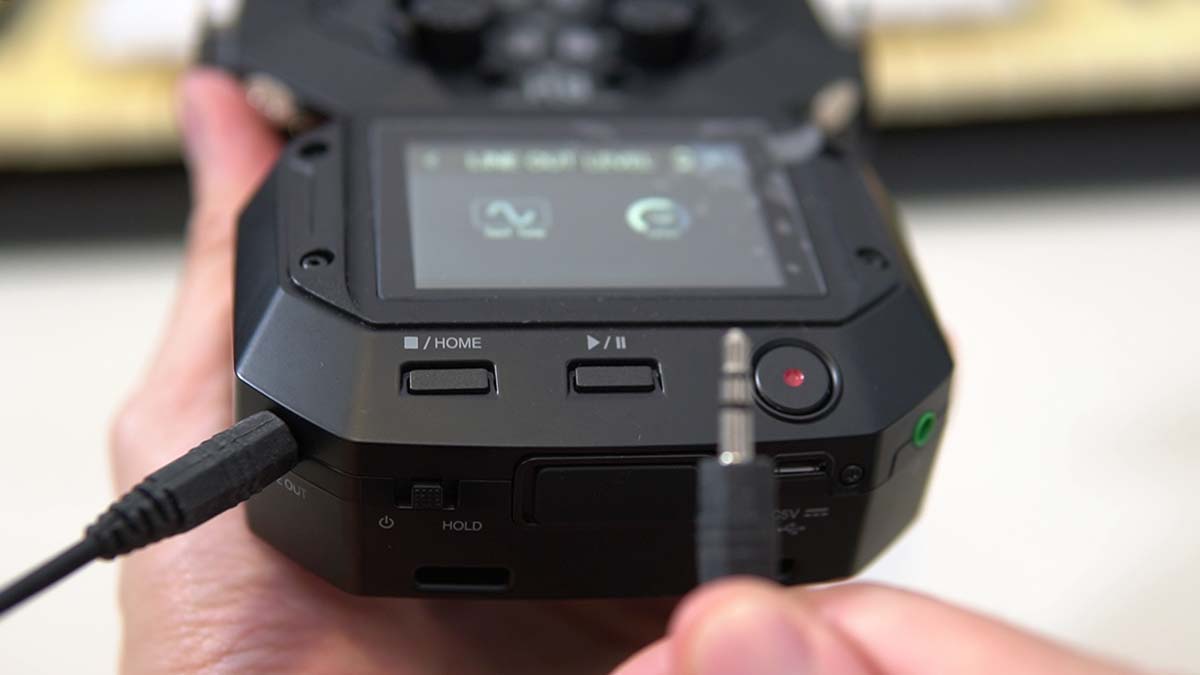 You can choose to use it in a stereo mix mode, where it’ll function as a 2-in/2-out audio interface. I find this particularly useful when jumping on online calls using apps like Zoom or Microsoft Teams, as those apps only recognize a single input.

Otherwise, choose to use the Zoom H8 in multitrack mode, which turns it into a 12-in/2-out audio interface that goes up to 96kHz and 24-bit.

The Zoom H8 is a portable audio recorder that does a lot of things. I primarily see it as a tool aimed at people who usually record on the field, such as:

That’s not to say the Zoom H8 isn’t a good companion if you mainly work just in the studio.

Generally, I’d recommend buying the Zoom H8 as a portable multitrack audio recorder and podcasting tool. Then treat its audio interface function as an additional nice-to-have.

Do you currently use the Zoom H8? What is your experience with it? Share your thoughts in the comments below!