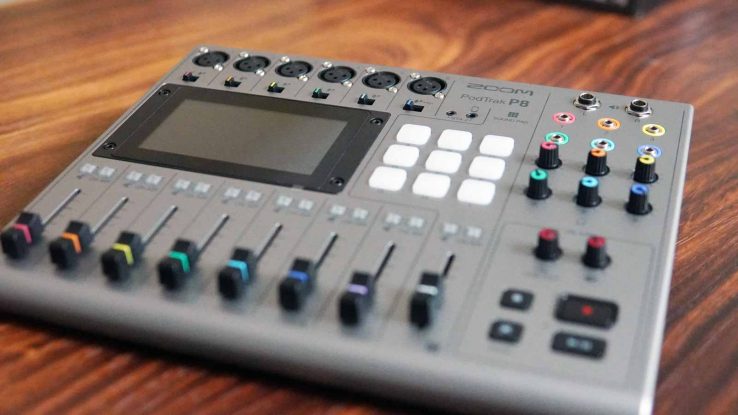 A podcasting mixer (mixer made for podcasters), functions a little differently from usual digital audio mixers.

I put my hands on the Zoom PodTrak P8 recently. It’s a multitrack podcast recorder, mixer, and audio interface.

Watch my review video below:

The Zoom PodTrak P8 looks like it was made to go against the RODEcaster Pro. So I would be making comparisons between them. 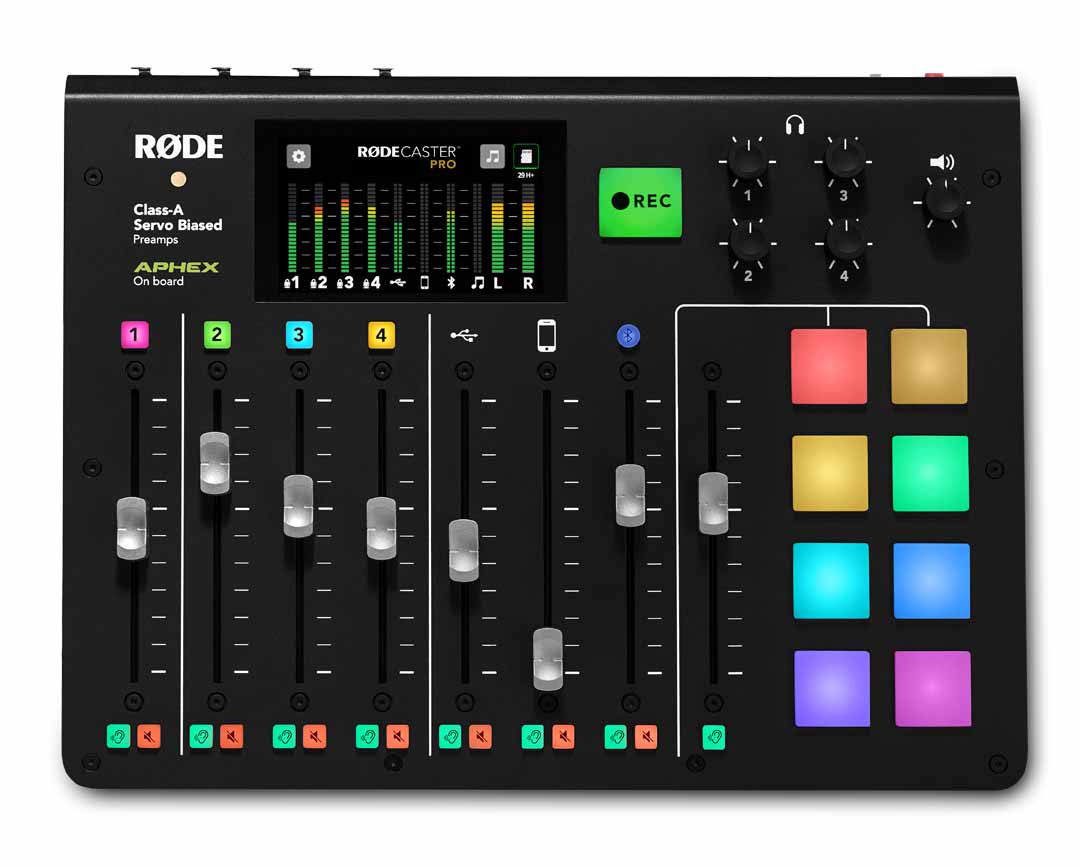 To be fair, I have not tried the RODEcaster, but based on some research and my experience using Zoom and Rode products, here’s how they fare against each other.

For me, choose the PodTrak P8 if you see yourself recording a larger group of people. Up to 6 microphones + ability to have an additional guest caller (stereo smartphone input.)

However, if you don’t think you’ll need that many inputs, given the small price difference – I would recommend going for the RODECaster Pro. Not only it looks more like a prosumer device, but it is also one, with its better-sounding pre-amps, audio effect functions, and on top of it all, firmware updates that bring extra functions. 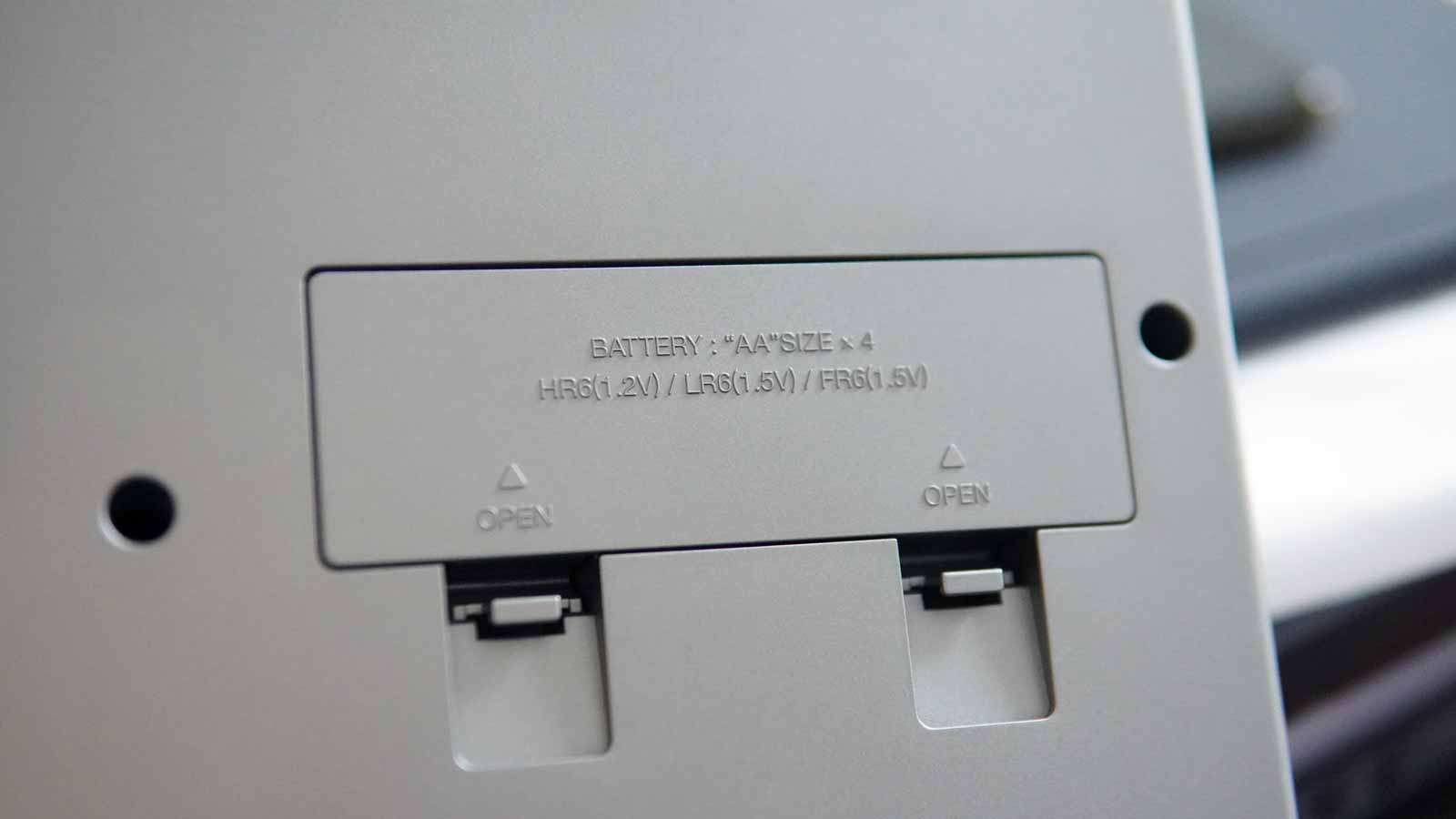 The battery compartment on the back feels a little ol-skool.

“What if I’m a Zoom fan?” – you say. Okay, let’s continue diving in the Zoom PodTrak P8

What’s in the box?

The Zoom PodTrak P8 came packaged in a box. Inside, you’ll find the PodTrak P8, an AC power adapter, and manuals.

You would have to buy your own USB-C cable, TRRS cable (for smartphones), and batteries if you need them.

It’s worth mentioning that if you plan on sending audio via Bluetooth into the PodTrak P8, you would have to additionally purchase a Bluetooth adapter, called the BTA-2 ($49.99 at this time of writing) that you’d plug into the phone input. 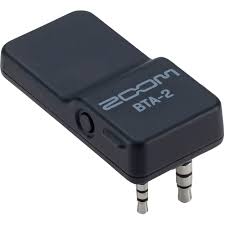 I started out by bus-powering the Zoom PodTrak P8 with an iPad Pro. It took a few seconds for it to be ready.

Once ready, I appreciated how straightforward its operations were. Don’t expect the PodTrak P8 to bring confusing functions like most digital mixers. In fact, some of the usual terms like ‘EQ’ or ‘Gain Level’ have been replaced by ‘Tone’ and ‘Mic Preamp min-max’. 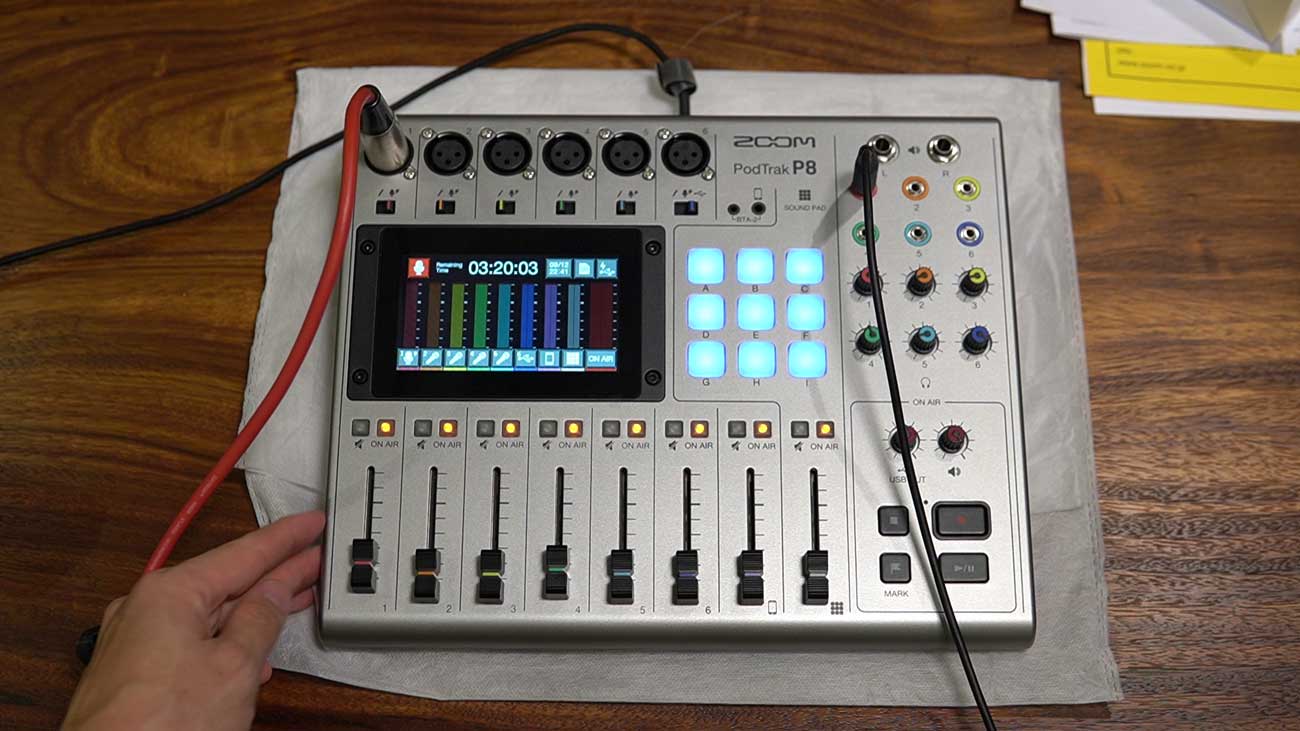 The PodTrak P8 was made, assuming that its users wouldn’t be audio engineers. Rather, they are podcasters and content creators, who want to focus on content creation.

Having 6 microphone inputs helps make the PodTrak P8 more versatile. This means more recording possibilities and a good thing – as a long-term investment, before having to upgrade to something with more inputs.

Having each input with its own phantom power slider is also a great addition, as it allows you to use a combination of dynamic and condenser microphones in a single recording session. 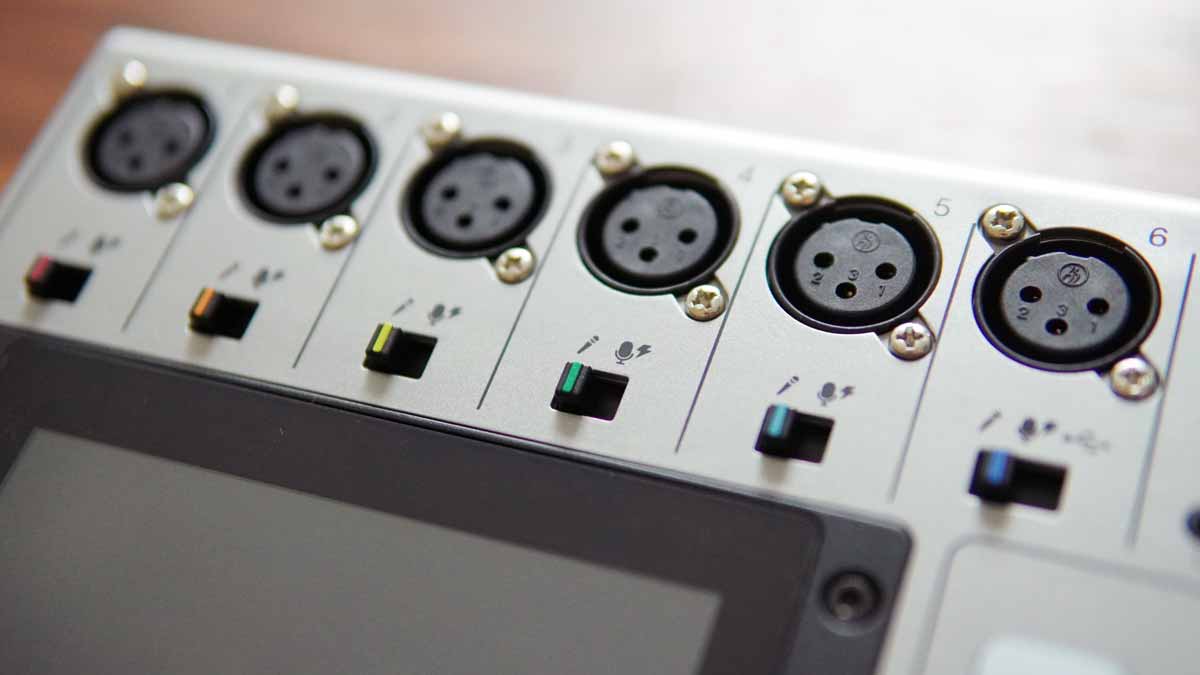 During my first use, I plugged in the SE Electronics X1 A, a condenser microphone, into input 1. I then switched phantom power on, tap on ‘Mic 1’ on the touchscreen interface to go into its settings, and increased the mic gains using a slider. The pre-amps on the PodTrak P8 provided up to 70dB of gain, more than enough to power the SE X1 A.

3 recommended microphones to go with the PodTrak P8

So far so good.

Setting it up to record was straightforward and easy. Once I made sure my levels were right, I hit the record button under the ‘On Air’ section and began recording.

There were a few annoying instances, like dragging a slider, that required me to repeat the action again. The touchscreen on PodTrak P8 is a resistive touch screen (soft screen), meaning that it adopts pressure induction. That also means the PodTrak P8’s touchscreen does not support multi-touch.

But otherwise, it works as advertise and shouldn’t prevent you from operating the device efficiently.

The thing about the PodTrak P8 is you won’t find any unnecessary technical ways to apply effects to your voice. On the plus side, this makes it easy for non-technical people. 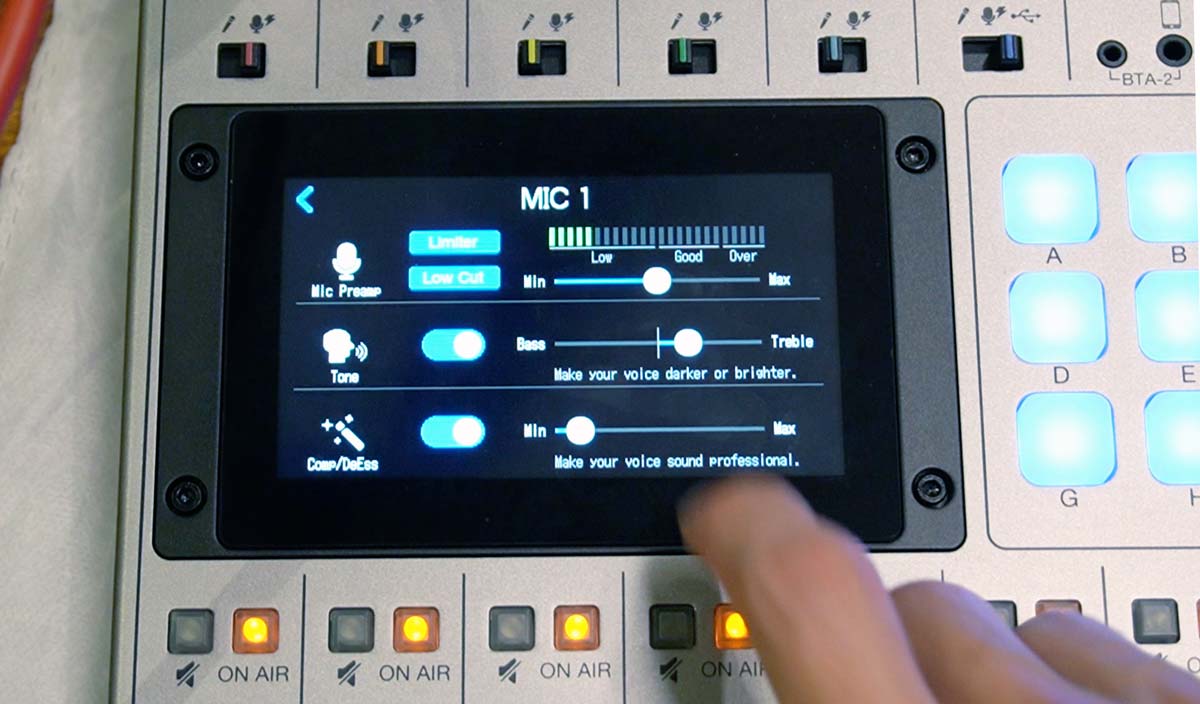 On the downside, the audio effects and enhancement on the PodTrak P8 are a little limiting. For equalization, you have a function called ‘Tone’, and you simply use the slider to apply brightness or bass to your voice.

And in a weird move, the compressor and de-esser effects are linked together. This means you can’t have just one of any, but must apply them both together. In my test, I felt the de-esser worked pretty well in removing sibilance from my voice. However, raising it also increased the compressor making my voice sound a little squashed. The key here is to find a balance.

You could also add EQ effects to the phone or USB-in track too.

A mix-minus refers to a mixed audio signal that is sent back to a guest caller on a podcast or live stream. The mix-minus allows them to hear other hosts on the podcast, minus their own – to avoid echo and feedback. 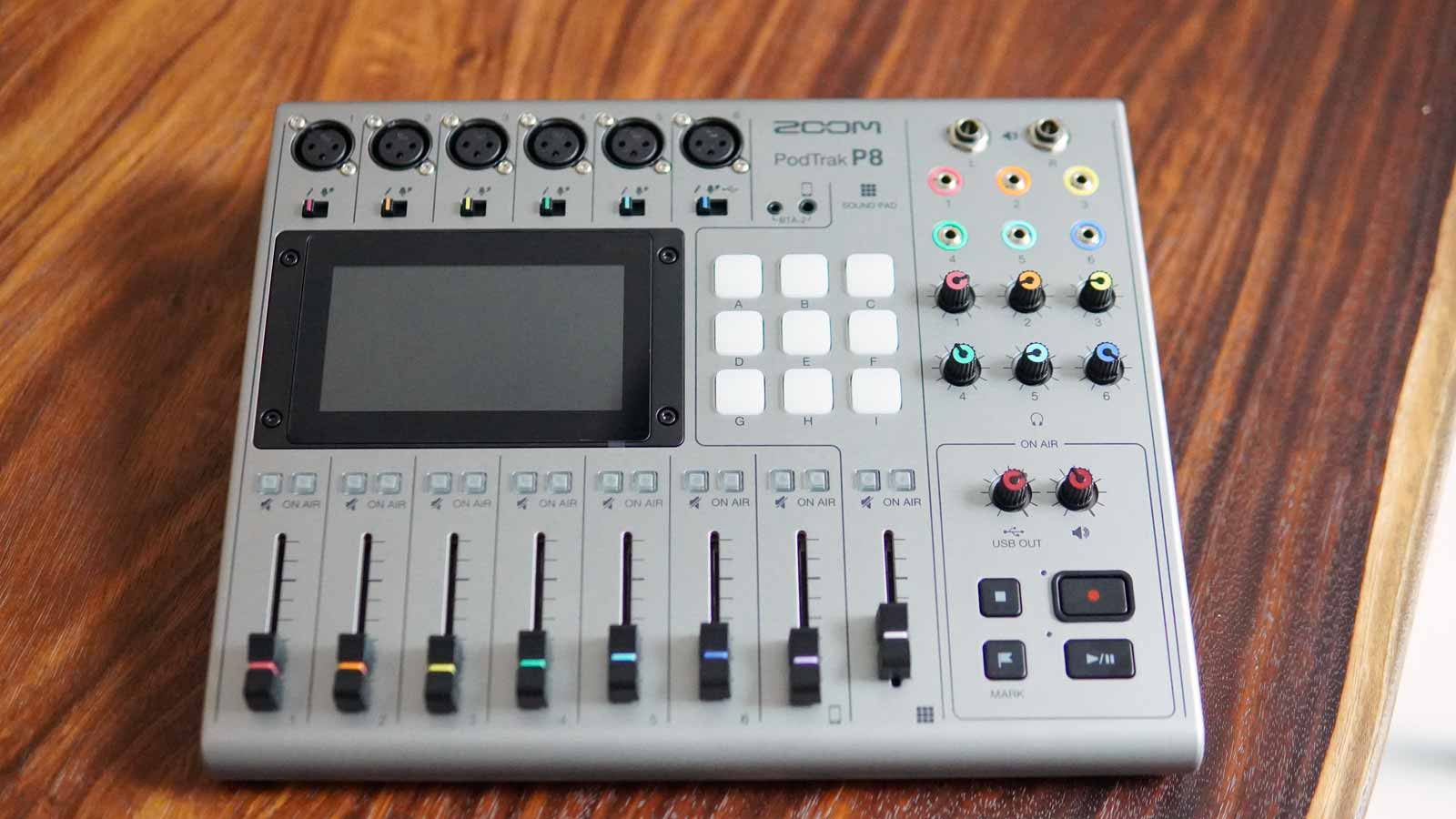 The PodTrak P8 is fitted with the mix-minus function on channel 6 (USB) and the smartphone channel.

The P8 features a dedicated channel to record phone calls. Additionally, channel 6 can be switched to a USB mode that allows you to record guests from your computer too. Both include a mix-minus feature that means it’ll prevent echo and feedback to the caller. 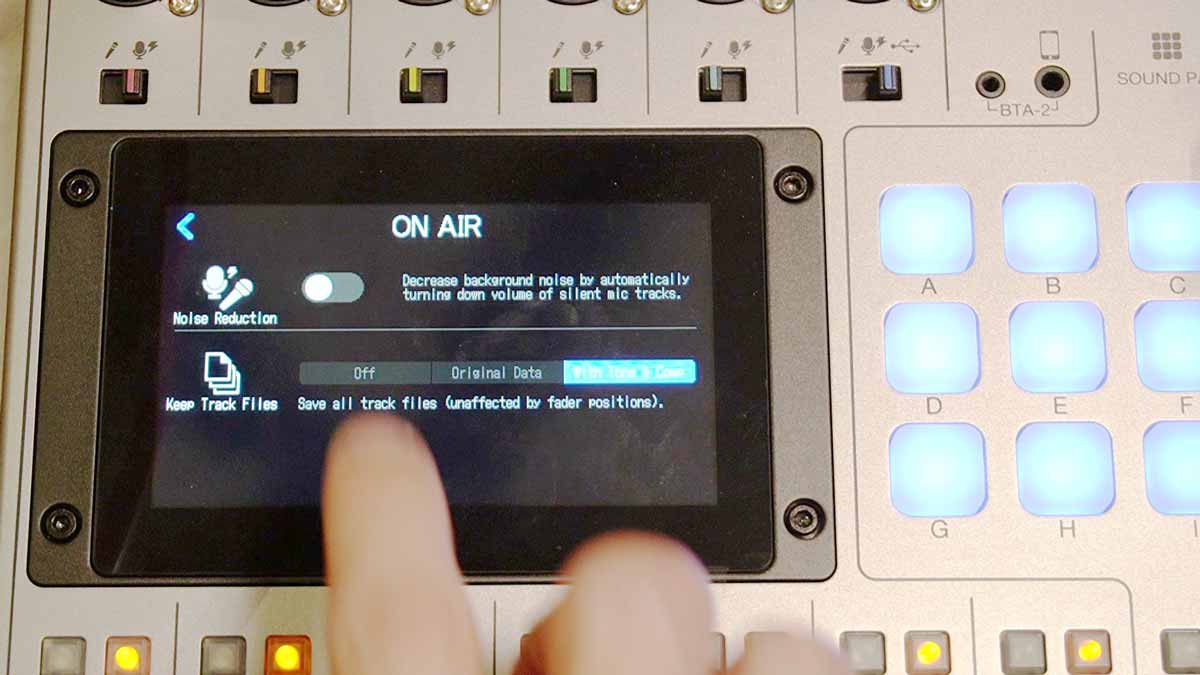 Noise reduction on the PodTrak P8

However, it appears that the noise reduction effect is in fact a noise-gate or ‘ducking’ feature, where it’ll automatically turn down the volume of a microphone input if it’s not in use during a podcast session – effectively reducing unwanted noise being picked up.

If you are a podcaster who plays lots of sound effects, music, jingles, or pre-recorded stuff – you’ll love that the PodTrak P8 can handle up to 36 sound clips, which you program on the 9 sound pads.

What I really liked about it is that you can also program different playback modes for each of the sound clips – from a one-shot, pause, loop or hold. This makes it useful for programming a podcast show on the fly, without the need to add soundbites in post-production.

Additionally, the RBG-lit sound pads put a nice touch to the overall look and feel. 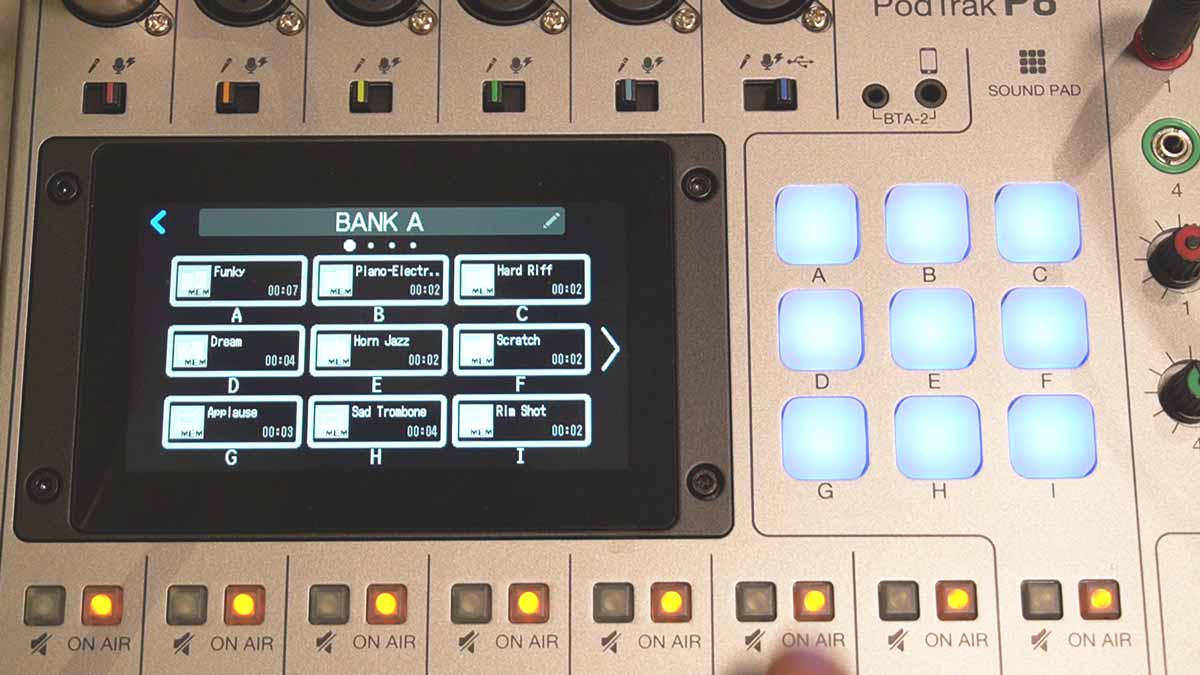 Using the PodTrak P8 as an Audio Interface/Livestreaming device

The PodTrak P8 will work as an audio interface, with your computer, tablet, or smartphone – connected via USB-C.

It’ll, however, work as a 2-in/2-out interface, where you’ll send the main mix of all the microphones into the computer. So don’t get your hopes up about using the PodTrak as an audio interface with multitrack recording.

Since the PodTrak P8 supports class-compliant mode, there’s no need to install additional drivers on your devices, like an iPad. However, the apps you use on your tablet or smartphone must be able to accept the current system audio source.

Here’s a shortlist of tablet/smartphone apps that work with the PodTrak P8:

The workflow for live-streaming on the PodTrak P8 via USB-C is to monitor the mix on the board, and once ready, turn the USB Out knob up under the ‘On Air’ section to send audio to your computer or tablet.

In the audio interface mode (on a desktop computer), you could send a USB audio return to channel 6. Additionally, you can choose to activate the USB mix minus setting to avoid echo and feedback.

Should you buy the PodTrak P8? 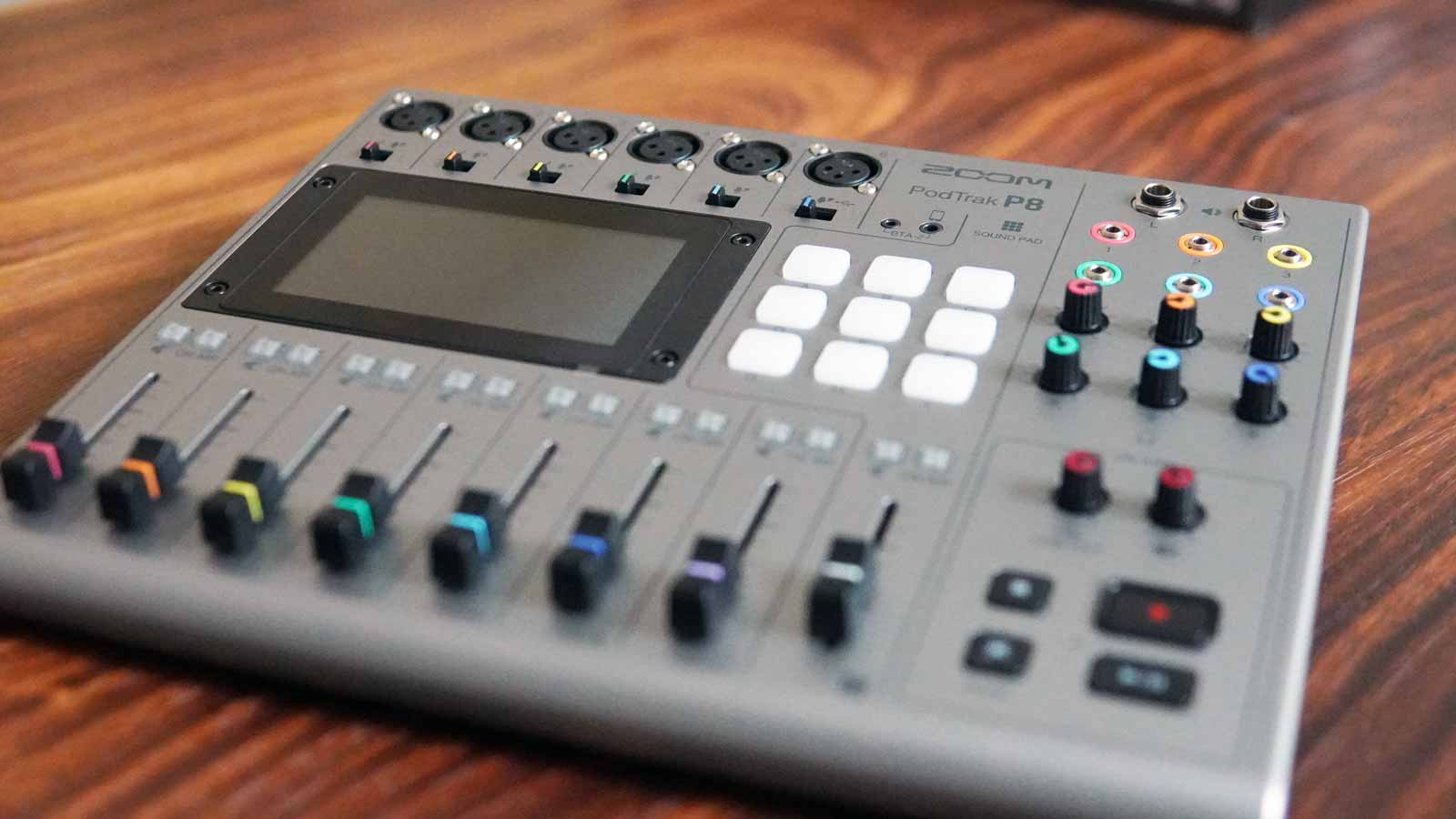 Buy the PodTrak P8 if the main thing you want to do is to record and live stream podcasts (with a group of guests). I wouldn’t recommend the PodTrak P8 if you are thinking of using it as an audio interface or portable recorder to record music. The features are made for podcasters compared to for singer-songwriters or musicians.

That said, the RODECaster Pro is a very strong competitive product that seems to win over the PodTrak P8 in many ways. If you don’t see yourself recording anymore than 4 podcasters in a single session, then the RODECaster Pro will provide you with more value.

Let me know your thoughts in the comment section below. Which one will you pick? The RODECaster Pro or the PodTrak P8?