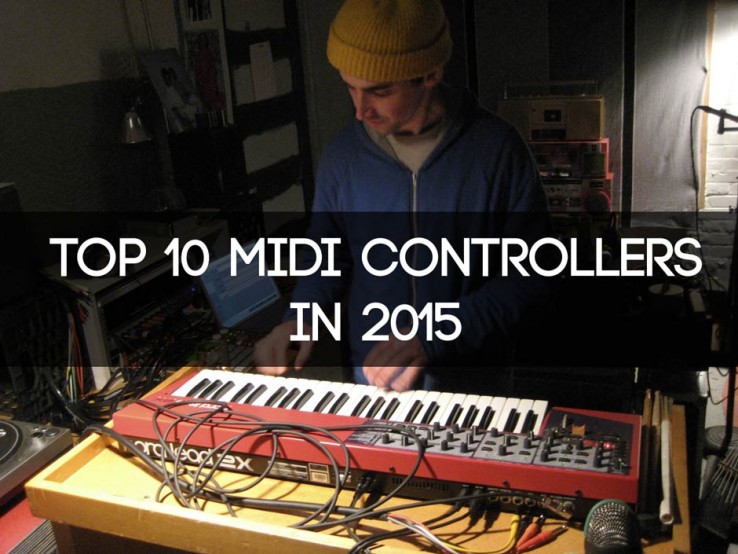 10 Midi Controllers Worth Buying in 2015

Decided to record ideas down into your DAW? Here are 10 midi controllers worth considering this year.

New year has passed and you made your resolution to make better music this year. Time to work your music career? When it comes to making music on your computer, no matter what you are, a DJ, producer, composer, singer-songwriter or arranger, you’ll find a midi controller a valuable addition to your studio. Even if you have been spending years clicking midi notes into FL Studio and have never played a keyboard before, a midi controller is undoubtedly one of the best investment you can make for your studio.

So without further ado, which is the best midi controller for you? 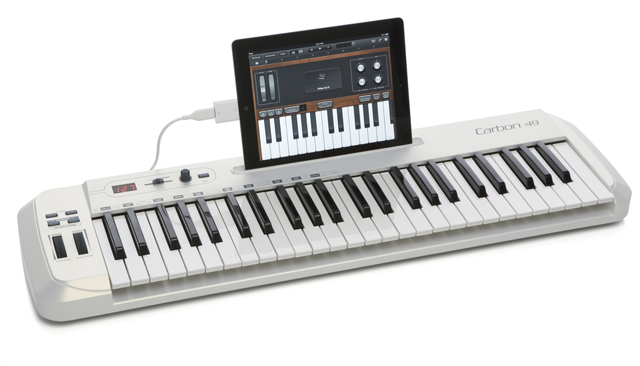 What gets you started in producing music faster than the Samson Carbon 49? A 49-key midi controller with one of the lowest price tag in the market, you can’t go wrong starting off with the Samson Carbon 49. It’s easy to set up, simply plug and play straightaway and it works right away with your iPad as well; great for busking and performing, when on the roads. The only thing to complain about the it is the somewhat a little ‘stiff’ feeling on the keys. Playing very expressive piano riffs on the Carbon 49 can be slightly challenging. However you’d probably be better off buying a midi controller with hammer touch if you’re a pianist who wants to record expressive piano riffs anyway. 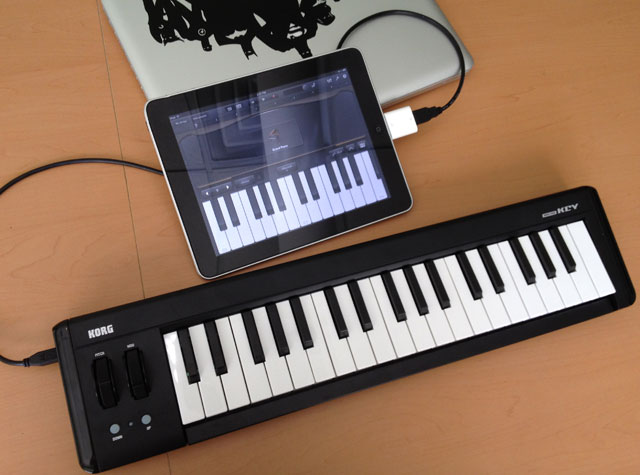 This babies seem to have gotten popular over the past few years. They’re built well and sturdy so you can ease your worries seeing a broken key or chipped off side. The first microKey that was out in the market were the 37 key model – which then became popular. The touch is nice however the keys are small, so you might have difficulties playing a smooth piano piece if you have fat fingers. The Korg microKey seems more suited for producers on the go or for producers who just need to program simple lead lines every now and then. There are two USB ports on the unit, so that means you can connect other peripherals to the microKey such as extra midi controllers. A small annoyance is the lack of a input for sustain pedal being a budget product. 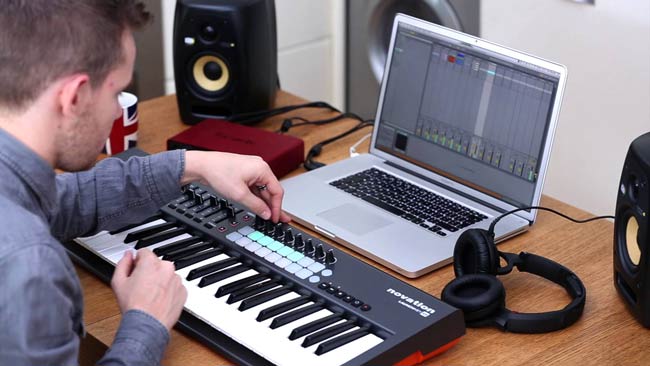 Novation are one our favorite midi controller that comes in three different sizes, in 25, 49 and 61 keys. One of the reason we really like the Launchkey is because of its very responsive keys and nice touch. They keys are solid and they don’t make clunky noises when played on unlike many other cheaper midi controllers. Driver-less installation was a breeze when using the Launchkey with the PC and Mac. We had some problems mapping the Samson Graphite 49 (not so nice-to-the-touch- pads) in another review but the Launchkey seems to work great and the pads are really nice to the touch too. We’re all praise of this midi controller. If you are an Ableton user you’ll find the Launckey even more appealing.

Check out the Novation Launchkey 49 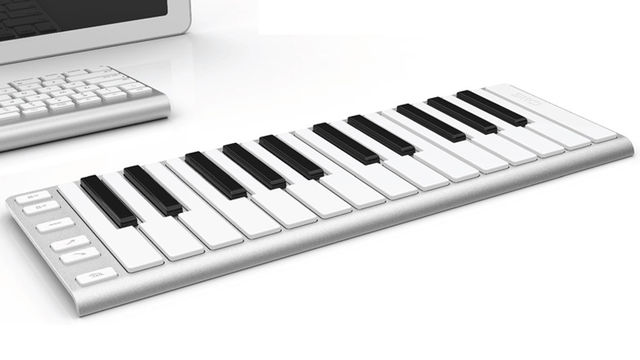 At first look the CME key looks unplayable with keys built looking more like the keys of a computer keyboard. A very low profiled 2 octave keyboard, with some getting used to, the CME is quite playable. Although the keys looks very flat, the CME is built in with polyphonic aftertouch – giving you the ability to add more expression to your recordings. I wouldn’t recommend the CME key for serious playing and recording. But if you are a travelling musician and would like to lay down quick ideas, then the CME Xkey is for you.

Not the midi controller with the best product design ever and the best keys built in. The keys are a bit noisy and not as solid as other brands, but being a really affordable midi controller that packs a punch of features. Products by Behringer are always a tad questionable however the UMX610 seemed fine in our last test. Total of eight assignable knobs on the keyboard which can be assigned to functions on your DAW such as Volume or Pan knobs, however we prefer to leave them unused. If you’re on a budget, go for the Behringer UMX610.

A midi controller that have been around sometime, since the days when MIDI programming on computers were starting to become popular. The M-Audio keystation 88 midi controller would appeal to mainly film scorers and producers who need more keys for programming. Note that the keys on the keystation are semi weighted, meaning it does not have the hammer touch function and thus won’t give you the touch of an acoustic piano. The amount of keys you get for the price is a steal though. If you make music that requires lots of midi programming, consider going for the keystation 88. 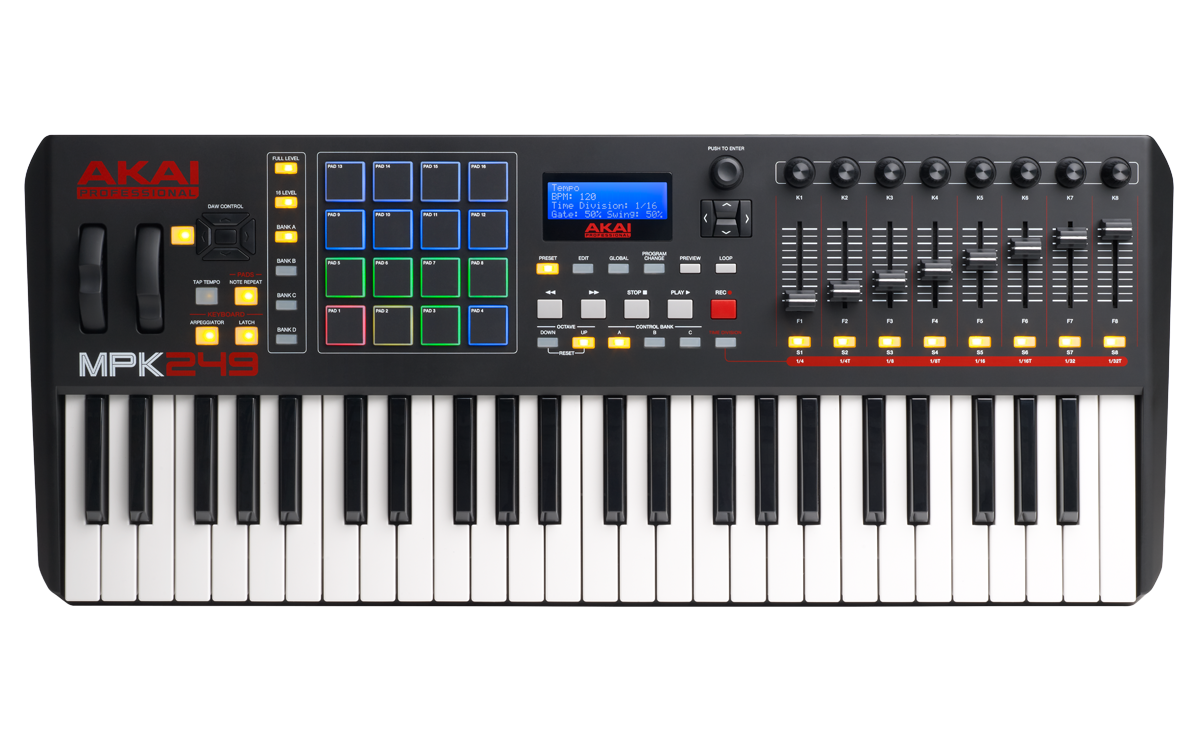 The Akai MPK 249 is a beast of a midi controller with everything you can think of built in. It comes bundled with a pack of softwares and is the only midi controller that comes bundled with such a software package. Synths, Ableton Live Lite, MPC essentials and more. Well if you’re beginning you might find the softwares that comes with the controller to be nice. However if you’re a seasoned pro then chances are we usually are much more comfortable using our own plugins and softwares. 8 assignable knobs, faders and buttons on the midi controller -great for mixing and fast tweaking without touching your computer’s keyboard. Also the keyboard comes with Aftertouch functionality making it one of the most complete midi controller out there in the market.

Get a midi controller which is near comeplete. The Akai Professional MPK249 ($499) 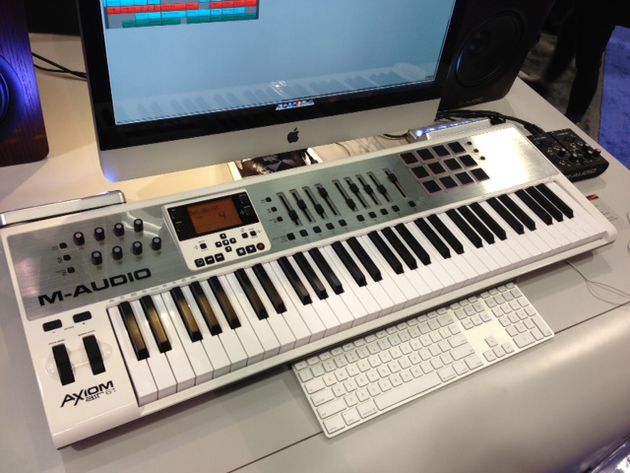 M-Audio makes really great midi controllers. From the simplest keystation 61 to the Axiom AIR series. You can select from the 25-key, 49-key or 61-key model for the Axiom AIR however at this range it just make more sense to buy the 61 key model for more versatility. 12 assignable pads, 9 sliders and 8 pans which all can be assigned to your DAW and plugins very easily with the software. The pads responds to pressure and the keys are also built with aftertouch, somewhat completing the Axiom as a music programming beast!

The midi controller that wow-ed us last year. The Kontrol S61 seems to be built with the Native Instrument’s plugins in mind. If you’re currently using any NI’s plugins, you’ll definitely love the Kontrol S61. It’s built very beautifully with a package of buttons and knobs. You can browse your plugins with a browser knob on the keyboard and have your instrument’s parameters mapped to the keyboard in an instant with ‘Native Map’. There is an LED showing you what parameter the knobs are being mapped to as well – no other keyboards has this! There are  also light guides on the midi controller, much more beautiful compared to those you see on children keyboards.

What does the lights do? Well besides giving you indication to your keymaps and key switches, you can also set several different scale modes on the keyboard. And then even if you don’t know how to play a Mixolydian or Japanese scale, you can.

Not just a midi controller,  but an analog modelling synthesizer by itself too. We feel a little guilty having the Nord Lead A1 listed in this list as well, but it’s worth mentioning.

The Nord Lead A1 is a monster. And it is. With unique oscillator sections, a big fat sound, great keyboard and potential of almost unlimited sound making opportunities, the Nord Lead A1 should appeal to sound designers and musicians who loves analog. The highlight of this keyboard should be the many oscillators which are used for sound sources. Everything will be controlled by all the knobs and you definitely will have a great time tweaking sounds. There is only a single LFO on board but again there are countless of sounds you can produce on the keyboard.