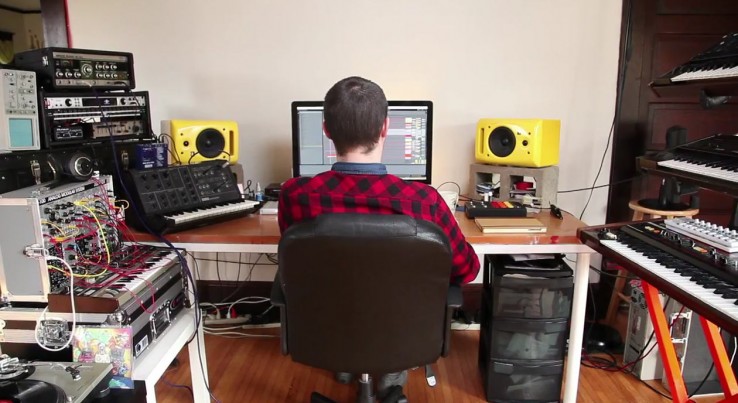 Year 2015 is here. Make improving your music production skills your new year resolution with these 10 ways.

1 – Learn How To Use a Compressor Seriously

Compressors are often taken for granted. No, you can’t just push and twist knobs around randomly hoping to get a great sound. For this year, take up the challenge to properly learn compressors on your software. Many people think compressors are used to make tracks sound louder. But a compressor isn’t a tool to make your signal louder – its much more than that.

As its name implies, a ‘compressor’ actually compresses your signal level, which is essentially actually lowering your signal volume instead of increasing the volume. Basically, the job of a compressor is to tame peak that your audio track might have. An example scenario when compressors can come really handy is when your vocal track gets drowned among your other instrumental track. A compressor can help bring your vocals back up while using it on the other instrumental tracks can help tame the peaks.

Before and after compressing comparison

So go really learn up on using compressors. Once you really know how to use compression, your production will improve. One book that helped me a lot when I started out was Home Recording for Musicians (for Dummies) by Jeff Strong. Yup, like you I was a dummy. Great book and I’d recommend it you any young beginner who is serious about music production.

You’ve met this kind of guy. They nearly always start with loops all the time. Granted, loops can give tons of production ideas and add life to your music. However, using loops can quickly make your music piece very repetitive. Don’t forget that music comes from emotions and the repetitiveness in loops can sometimes simply kill the emotions in music.

If you find yourself having to start with loops whenever you sit down to come out with a new piece, then perhaps its time to get some fresh ideas. Instead of slapping a loop, try recording your playing for a change.

We know this one. Records a guitar riff, slaps on a preset, and done!

Presets on your plugins and DAWs are nice to explore. They’re probably there to show you the possibilities you can do with a certain plugin; getting different types of sounds or effects. Stop using presets! If you’re using presets on effect plugins, then you’re probably a preset criminal. The presets you have on your effect plugins wouldn’t sound 100% great on your track, simply because your track is recorded differently. Master and learn how to tweak your effect plugins from scratch.

When it comes to synths and samplers, presets are amazing too. However, in order to create your own signature sound that stands out from the rest of the producers, you have to start tweaking and creating your own sounds. After all, if everyone is using presets, then everyone would sound the same.

Most producers do this. We never settle for less. Often we start a track with only one single instrument before adding tens of other tracks into our piece, overloading the whole musical piece.

Sometimes the simpler it is, the better it sounds. Cluttered music arrangements sound bad. Listen to some top music by famous producers and you might be surprised to find their music arrangement to be simple. Take film scorers for example. Download their scoring sheets and analyze the arrangements. If you study the scores of Danny Elfman, a famous film composer, you’ll find that some of his music scores are pretty simple but it sounds remarkable. Check out Ice Dance by Danny Elfman. Simple but powerful melody.

EQ is your best friend in music production. You’ll use it during the composing phase, tracking phase, mixing phase, and even during the mastering phase. Master EQ techniques and your productions will improve for the better. Rolling off the frequencies 40khz on your music track with a low cut is recommended by many producers. The frequencies below this range are nothing more than bass rumbles which are usually often ‘felt’ than heard. The problem with these frequencies is that they can make your mix overload quickly.

As you add more tracks into your arrangement, your mix can get ‘muddy’. This normally occurs when you have two or more bassy sounds stacking on top of each other, resulting in usually clipping or phasing. When coming into muddiness issues, often rolling frequencies off the 200hz mark can help. You’ll want to notch off the frequency space with a reliable spectrum EQ at this point. Keep in mind that a shallower bell curve will give you a more natural sound, while a steeper bell curve will give you the ability to pinpoint and cut the frequency that you do not want.

There are tons of FREE EQ plugs over at Plugin Boutique. Or perhaps go for one amazing-sounding EQ plugin we really recommend, Curve EQ Voxengo. It also comes together with Steinberg Cubase 8.

Have you found yourself having messy arrange windows on your DAW with tracks all over the place? Coloring your tracks accordingly will give your eyes a break and improve your workflow. Try coloring your tracks according to the type of music element. Pads can be green in color, drums & percussion tracks can be red and so on. You’ll see improvement in your workflow and mixing.

Colored tracks will give your eyes a break!

A no brainer. Pay for your software and you’ll appreciate it better. Besides, there are often bugs in pirated software, and thought you might be saving a few bucks on getting a professional DAW, you’ll just waste your creative time when creativity hits and you have to fix technical problems on your software. It’s never worth it.

If you’re tight on cash, starting off with light DAWs wouldn’t hurt. There are also cheaper DAWs such as Reaper which is amazing quite a nice DAW to start off with. We know producers who made the jump from giant DAWs such as Cubase, Logic to the simplistic Reaper!

If you’re like me, you have the GAS syndrome as a producer. It’s called the Gear Acquisition Syndrome which is fairly common among fellow producers. However think about it, have you actually mastered your soft synths and plugins already? Instead of repetitively buying new gears whenever something new comes out, take the time to really learn up and explore the existing plugins and synths that you have. There’s nothing wrong in using slightly dated software or DAW. All that matters is making great sounding music!

Never mix at loud levels. Music always sounds better when it is louder. Mixing at loud levels might fool your ears into believing that your music actually sounds great. Mixing at low volumes often produces better mixes. Also, try not to mix more than 45 minutes in a session. You’ll get ear fatigue upon listening to music for a long time and your ears will need time to recover. Try mixing for prolonged hours and your ears would begin to trick you to feel your mix sounds great.

So take 5-10 minute breaks between every session of no more than an hour. Take a walk, a drink, or just exit the studio for a while. When you return to your mixing desk, you’ll get a fresh perspective on your mix and suddenly, you’ll begin to hear the mistakes that you didn’t hear a while ago.

I was a perfectionist. In fact, I still am today. But in my years of producing music, I learned to embrace imperfection.

With the many functions in DAWs today, we can quantize MIDI notes and even audio tracks now. Suddenly, everything becomes perfect. The problem is when you over perfection-ize your tracks, your music will become too robotic and unnatural. Real human makes mistakes and those mistakes make the tracks breathe.

Also, decide to finish on a mix. I remember the times where I could spend days mixing a song and never be satisfied with it. As Leonardo da Vinci said, ‘art is never finished, only abandoned, there will come a time where you have to call complete for your mix. Embrace the imperfections.