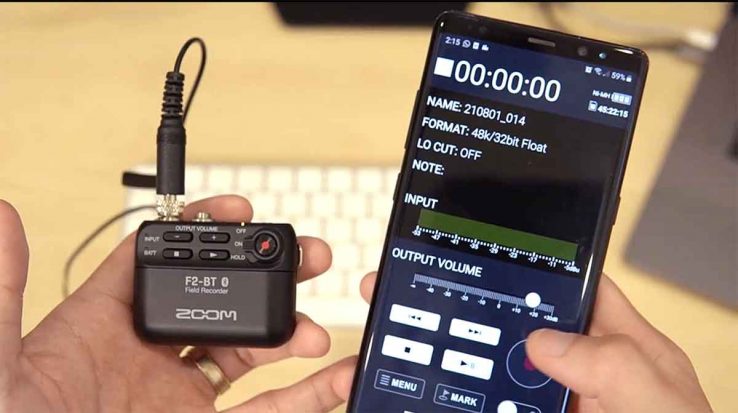 In the past years, field recording tech has more or less been around the same. Most of the technological advancements have been around improving mic pre-amps, digital functions, microphones, and multitracking.

But with the arrival of 32-bit float audio recorders, changes everything in field audio recording.

With 32-bit float, forget about having to set gain levels. The Zoom F2 has the ability to record 32-bit floating-point audio files, making it ideal for recording a super-wide dynamic range recording.

There is so much headroom, that it doesn’t really matter where gains are set during the recording stage. Audio levels in a 32-bit audio float file, can be adjusted up or down without introducing noise or distortion.

To add a perspective to whether a dynamic range of 1528dB would be enough for your recording needs – consider that the dynamic range between an anechoic chamber and a shockwave blast is probably around only 210dB.

A whitepaper on Sounddevices.com explains 32-bit audio better than I can. I recommend you to read that up.

Experiencing the Zoom F2 and F2-BT

I had the privilege of recording with the Zoom F2-BT and Zoom F2, an ultra-compact portable field recorder that records in 32-bit audio float. The difference between the Zoom F2 and F2-BT, is simply the addition of Bluetooth on the latter, to control the recorder using an app. (more on that later.)

Aimed towards podcasters, videographers, bloggers, and journalists – the Zoom F2 is incredibly small and lightweight. It’s not water-resistant though.

Watch my video review & experience with the Zoom F2:

You don’t need to read a manual to figure out the Zoom F2. Upon unboxing it, I inserted two AAA batteries, plugged in the supplied LMF-2 omnidirectional lavalier microphone to the mic input, and began simply hit the record button to record.

There are only a few buttons & functions on the recorder – record, hold, playback levels, stop and play. As someone who has used the Zoom H8 portable recorder a lot, it was a little strange not to find any gain knobs or levels on the Zoom F2.

The Zoom F2 comes packaged with the lavalier microphone, 3 windscreen filters, 2 AAA batteries, and a plastic mic clip. I thought it was neat, that you can twist the mic clip (named MCL-1) to change the position of the mic, depending on where you use the clip.

You also get a copy of Steinberg’s WaveLab Cast, a light-weight DAW with the Zoom F2, packing a €69.99 value.

Before you use the Zoom F2, you need to adjust the settings, form file naming format, recording format, and more. However, this requires you to connect the Zoom F2 via USB-C to a computer and use the F2 Editor. Keep in mind that the USB-C cable is not supplied as well.

The Zoom F2 Editor allows you to change settings, which you should before you start recording anything serious. Some of the settings include adding a low cut filter, file naming conventions, battery type, auto power-off, Bluetooth function, and formatting the SD card when necessary. 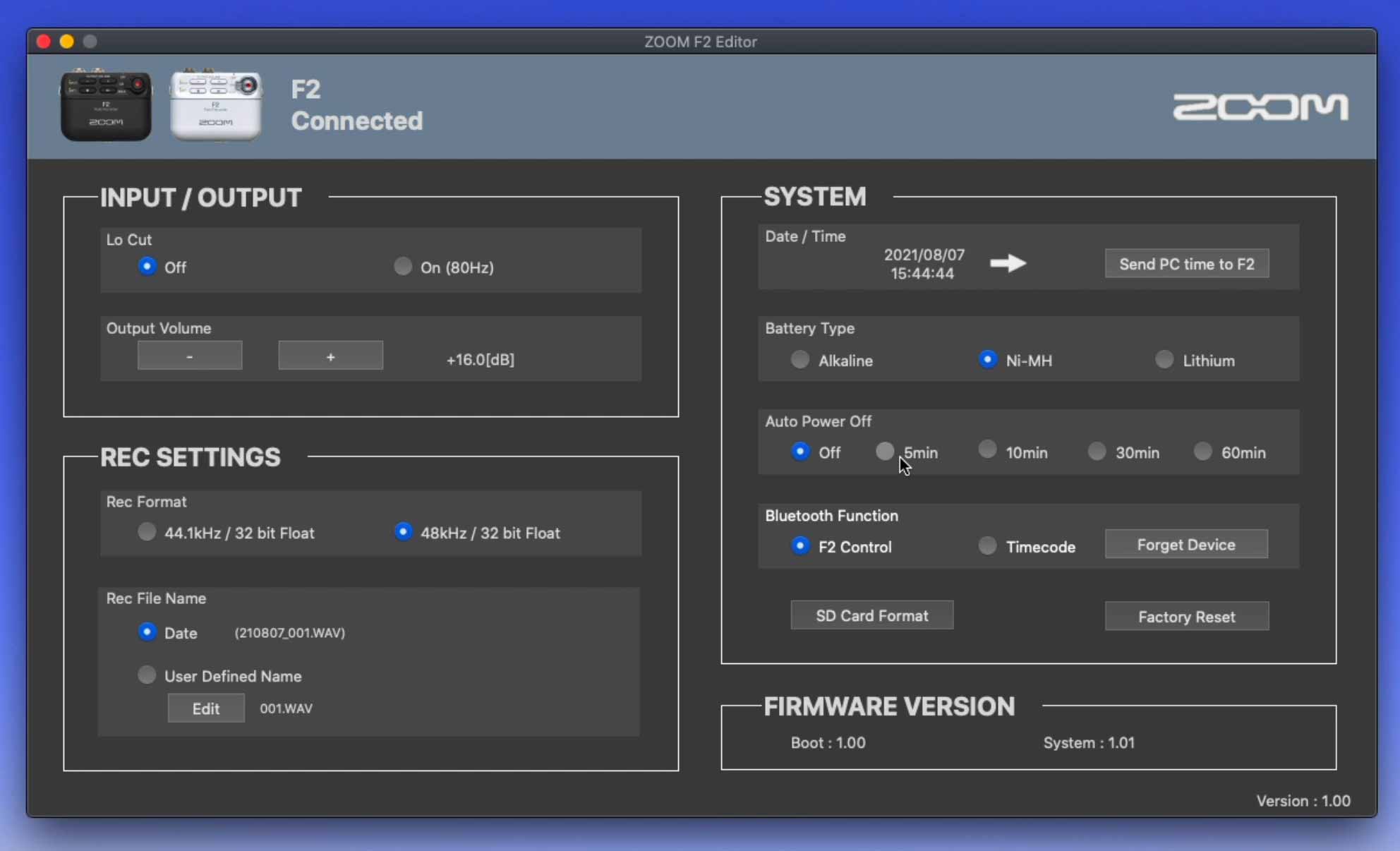 With the Zoom F2-BT, this allows you to control the recorder wirelessly with a mobile app, called the F2 Control. When connected via Bluetooth, the physical buttons on the Zoom F2-BT will be disabled and all controls have to be done on the app. The app also allows you to make changes to settings. 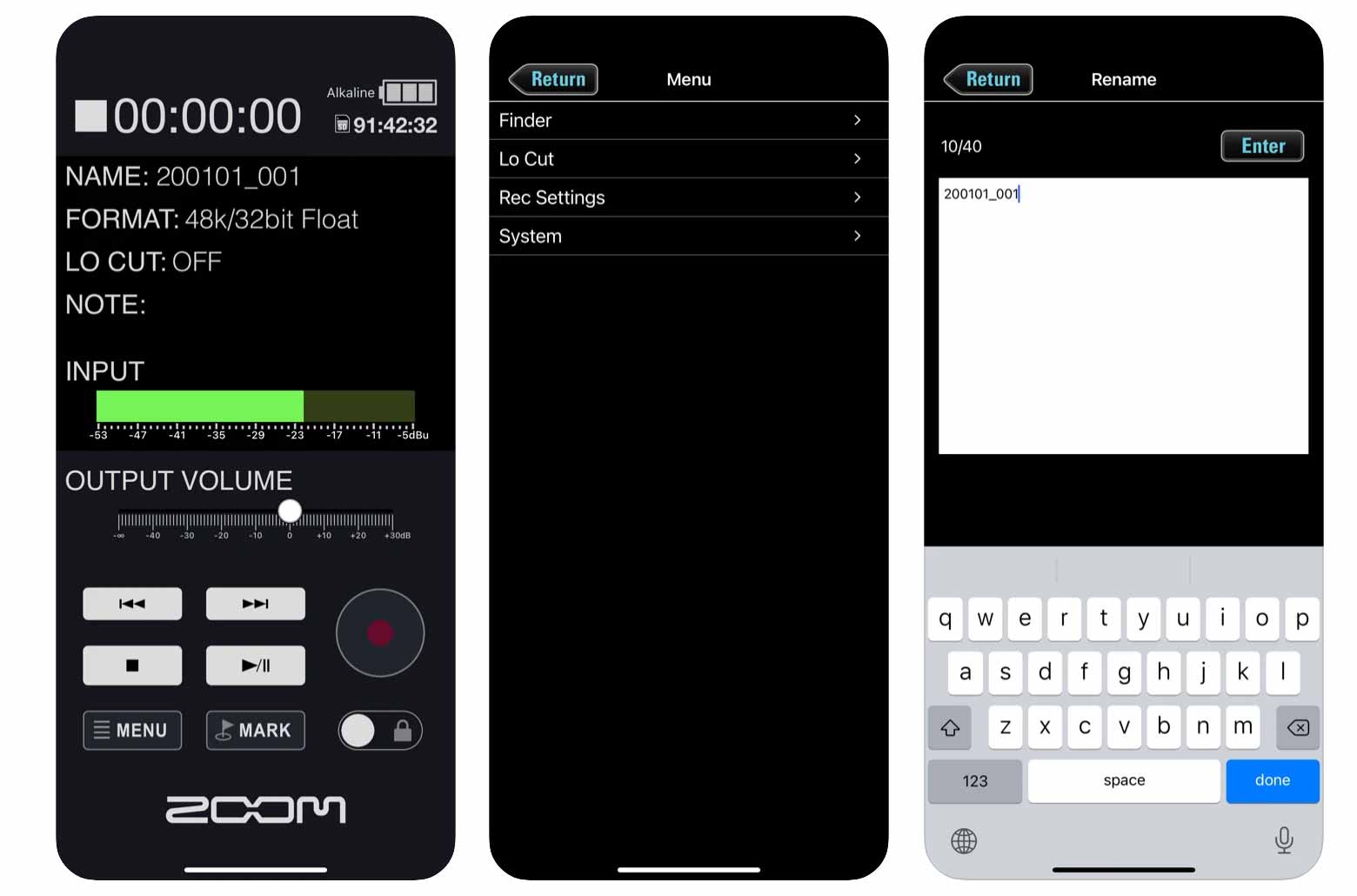 To me, being able to control the Zoom F2-BT wirelessly via Bluetooth is worth the $50 upgrade. This is useful if you need to turn on, for example, the low-cut filter in the midst of recording in the field but don’t necessarily want to lug your laptop when running and gunning.

Otherwise, the Zoom F2 without the Bluetooth also works beautifully, granted that you make sure settings are right before heading out to record.

I’ve not tested the battery life on the Zoom F2, but it claims to be able to record up to 14 hours with 2 AAA batteries. Otherwise, if you are using the Zoom F2 as a stationary recorder, you could also power it with a USB power bank. 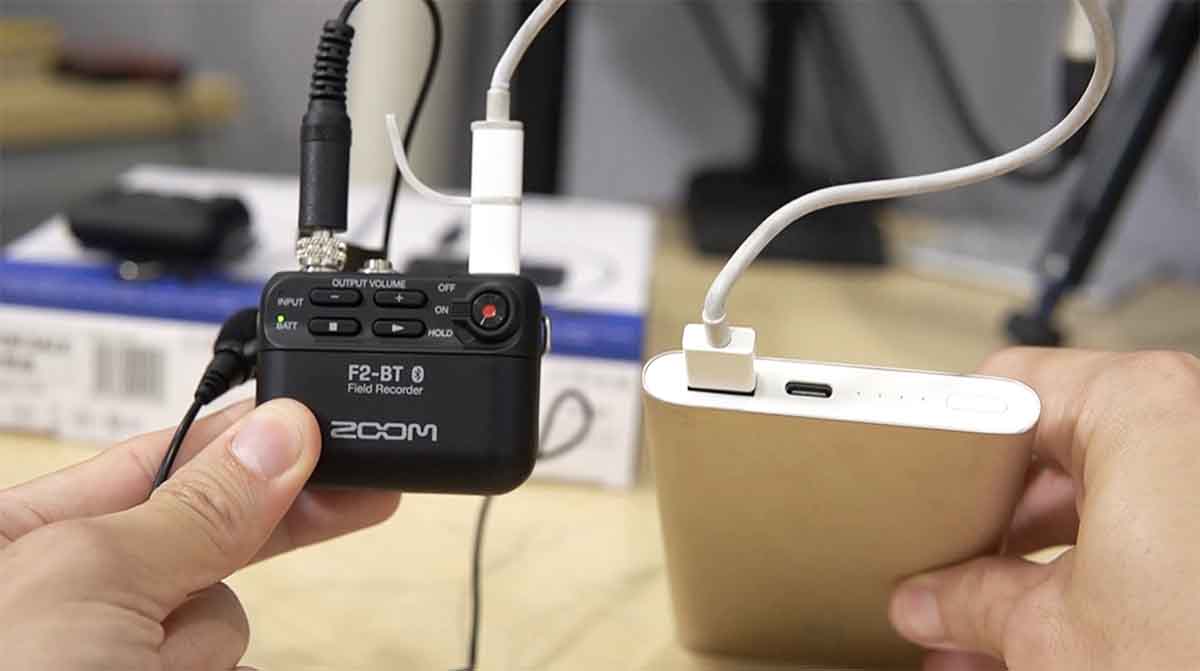 The included lavalier microphone sounded impressively decent. It definitely sounded fuller than the Rode SmartLAV that I’ve been using for my videos. The supplied lavalier has an omnidirectional sound pickup pattern, so though it’ll primarily pick up your voice, it will also pick up sounds from around.

You can use any lavalier microphone with a 3.5mm connector jack with the Zoom F2.

Usability-wise, the Zoom F2 does the job beautifully. Hit record, make sure to lock the controls then clip the recorder to your belt or pocket and forget about it. You can also review audio recordings on the Zoom F2, by plugging in a headphone in the headphone outs. 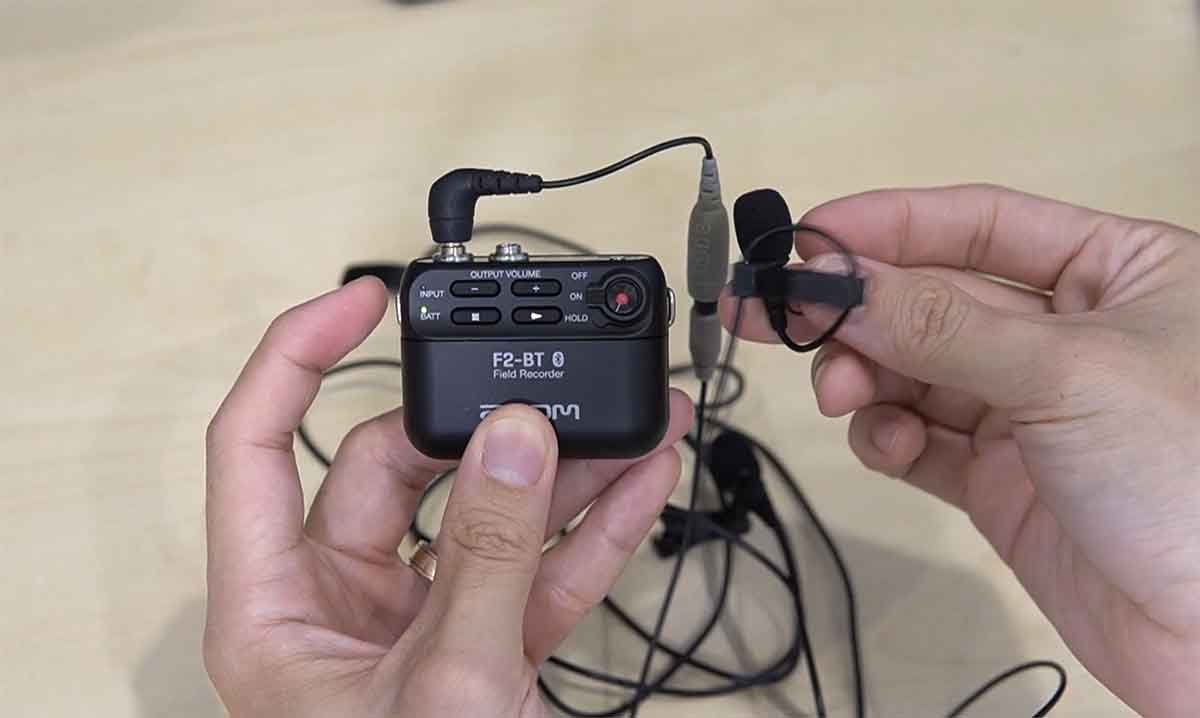 Otherwise, most of the work of cleaning up and syncing audio to video should be done on your DAW.

The Zoom F2 is a nice field recorder if you want to record high-quality audio on the go. But this means you have to sync up the audio to your video (if you are shooting a video), in post-production.

Since I’m quite used to recording on the Rode Wireless Go, where I would send the audio directly into my camera, I found it a slight hassle having to sync up the audio & video later on. However, I also understand that most field recordings are done in this manner, whereby rather than syncing straightaway, a clapboard would be used to assist in synchronizing of picture and sound.

Otherwise, the 32-bit float audio recording on the Zoom F2 was really impressive. It is truly a portable field recorder, where you just hit record and forget, rest assuring that it will capture every audio nuance.

Over to you. What are your thoughts on the Zoom F2? Drop your comments below and discuss away.