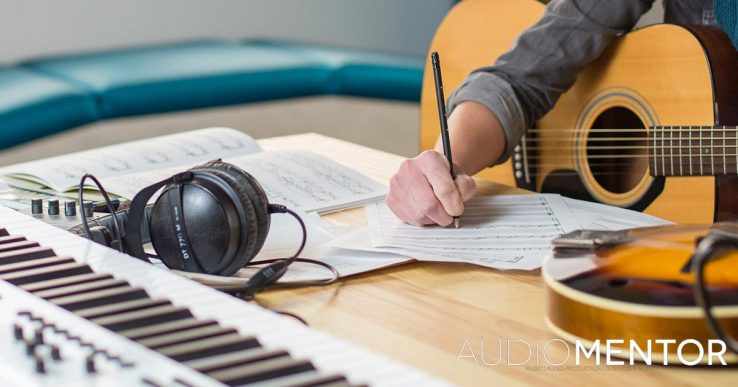 Writer’s block visits all writers at some point.

You’ll be surprised to find many genius songwriters also struggling with it. But of course, nobody talks about them on the media.

You know the feeling.

Sometimes, creativity just dries up. You sit down in front your music workstation, stare into your blank DAW arrangement window and just allow time to pass by you.

For someone with a looming deadline, that can be deadly serious

Writing songs or melodies has always been a creative process. A PROCESS. Too many songwriters give up on the first try, without realizing that writing music is a process.

We’ve teamed up with the professional writers from Essays Scholaradvisor, to round up 10 songwriting tips to help you overcome writer’s block, the next time you have it.

1. Play With The Title

Have you ever finished composing or producing a song, completely finishing the hard work, then struggle to find an appropriate title for it?

This strategy works for most writers, content or song.  Come up with a good title and let it inspire you to write the rest.  Some of the most popular songs today were written that way, such as “Bed of Roses” by Bon Jovi. In many cases, you can develop a whole story around the title, which is what many content writers do as well.

However, maybe you find coming up with a title a challenge in itself.

A way to counter this is to come up with tons of titles. Don’t be too critical about how they sound at this point, just churn out as many titles as you can until you come up with one that strikes you.

A good source of potential titles is poems or novels, either the title themselves, the plot, a character, or a passage. Think about your favourite work of literature, and let inspiration strike. Substitute out some words, or flip them around to see what you get.

Some examples of songs inspired by literature include “Firework” by Katy Perry and “Wuthering Heights” by Kate Bush.

2. Look For Inspiration in Quotes

Famous quotes are famous because many people can relate to it. You might be able to get some inspiration for your music by looking up some quotes. Use them to give you the right attitude, theme and then use them in your song for instant recognition.

Check out some of these classics and feel free to tweak them:

Just by reading these quotes, you’ll begin to get quick ideas of lyrics you can potential mash and use in your music.

Sounds like a silly idea, but this technique works well when you simply have no idea to move forward with the song, being stuck with the lyrics.

Gibberish is made-up words that help your music flow by its own odd cadence or sound, and yes, you’ll be making up the music as you “doo doo doo” or “na na na” away.

You have to be careful about using them too much in your song, though, sometimes keeping the gibberish in your song can be a good thing.

Check out this example below:

4. Step Away From It

Many writers resort to this strategy when the writer’s block becomes too much and nothing can budge it. Agonizing over your inability to write lyrics or compose music only puts more pressure on you, which can be highly counterproductive.

Sometimes, stepping away from your work and doing something totally unrelated to writing music will give your brain and mind, a chance to rest and to recharge.

This often works for some songwriters and composers, as doing it enables them to come back to their work later with a different perspective and view.

Do something totally unrelated to your music. Take a walk in the park, do some chores, chat with a friend, or simply put together a meal and watch some television.

When you go back to work, you will feel more energized, and you may even feel inspired by what you saw, smelled, heard, or felt while taking a break.

A helpful idea is to carry a portable audio recorder or get a robust audio app on your phone, to quickly capture musical and lyrical ideas when it hits, when out from the studio. 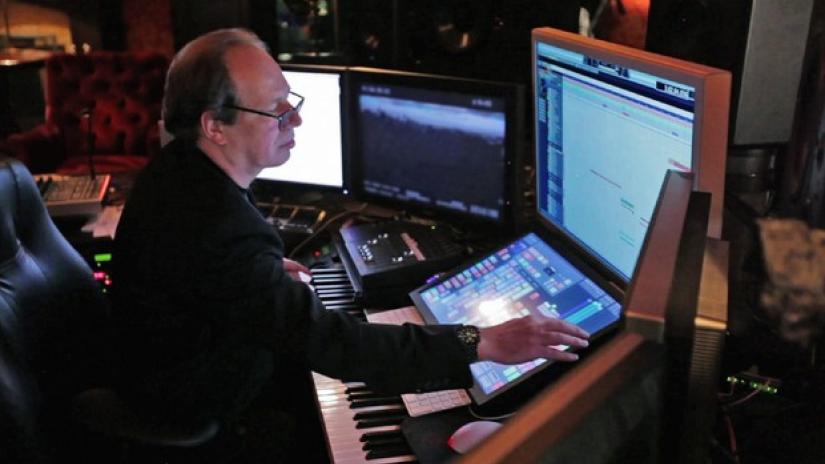 This tip may seem to contradict the earlier tip, but what this means is to just keep writing songs even if you don’t feel it is your best work.

Making music, no matter how mediocre, keeps your creative brain well-oiled, and encourages muscle memory for the simple act of creating. You may write 10 or 100 songs before you make one that makes your heart sing, but each failed or sub-par song that came before the hit song helped to create your masterpiece in some way.

Hans Zimmer, also go through this process when composing music for film. He calls this the discovery stage and sits down to write a ‘music dairy’, where he would hit the record button and start composing, laying down every melody or chord progression he can come out with, without judging it. After composing for some time, he’ll then take a break before going back to the beginning of his ‘music diary’ to review all the music passages that he has composed and selectively choosing parts that he likes.

You might also be surprised at people’s taste in music.

Some songs you thought were no good may turn out to be hits. Gloria Gaynor’s “I Will Survive” (written by Freddie Perren and Dino Fekaris), was initially released as the B-side to her single “Substitute.” For those who have never seen a 45, that means it was considered a second-rate song.

Fast forward to today, very few disco songs are still as recognizable as I Will Survive and almost no one remembers “Substitute.” So give all your songs, whether good or bad a chance to see the world. After all, it has become so easy to publish music in the digital world, why not give a shot you got?

Have you ever heard the expression “when inspiration struck”? You’ll never really know when or where you’ll get your next light bulb moment.

No man is an island, and when you get writer’s block, you’d better learn how to swim.

It is important for you to get out, mingle, and really pay attention to what is happening around you.

Sit on a bench and watch people pass by, or converse with someone on nothing important. You may hear some random statement from someone passing by, or see something unusual that will drive a spur into your creative horse and get it going. Or listen to other people’s music and get your “aha!” moment from there.

The creative process in writing lyrics or music normally comes from inspiration and emotions, so it makes sense to expose yourself to more of those.

7. Get Rid Of Clutter 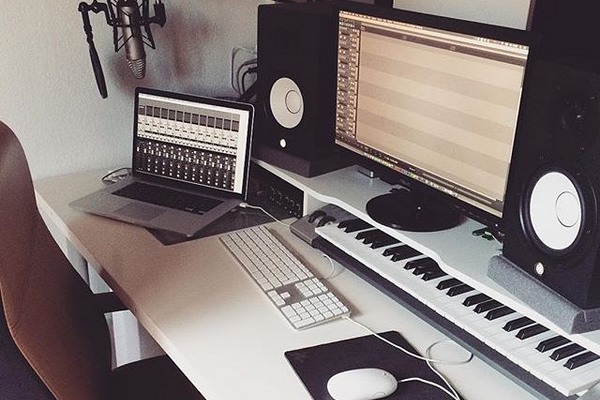 Most people think artists are naturally messy people, but as a songwriter yourself, you know that isn’t true.

Clutter, whether physical or mental will often interfere with the creative process because it distracts you and keeps you from thinking clearly.

Before you start work for the day, organize your music workspace and your thoughts.

Clear your desk (physical or digital) of everything you don’t need, and start writing down your ideas for the day. What really helps is to have a clean desk with no distraction.

If you have a habit of starting one song, and then jumping to another, create a list to keep track of each unfinished song so that you can go back to it when inspiration strikes.

Also, it goes without saying, but it helps to turn off digital distractions such as social media and your buzzing smartphone. Put them to silent, airplane mode and put them out of your reach and I promise you, that you’ll be 10X more productive and creative in our songwriting.

Maybe its time to look for a proper studio workstation for your studio.

8. Start with the chorus

If you already have a chorus, but are having a hard time coming up with the intro, junk the intro and jump right into the chorus.

Many hit songs use this technique to capture the attention of the audience by using the song’s hook in the opening salvo, rather than easing them into it. The best examples of this are the Beatles’ first hit “Love Me Do,” and of course, “She Loves You,” their bestselling single.

This might not work for many, but believe it or not, your dreams may be your subconscious pointing the obvious way out of your writer’s block.

Many artists claim that the inspiration for their most inspired work came to them in a dream. This would get some eyeballs rolling.

But consider this, Paul McCartney attributes his trip to dreamland for “Yesterday” (he used “scrambled eggs” as placeholder lyrics to hold the melody in his head when he woke up), and so does Sting for “Every Breath You Take.”

Perhaps it helps to keep a notepad next to your bed, just in case the next riff comes to you in a REM sleep.

Simon & Garfunkel wrote “When you’re weary, feeling small, When tears are in your eyes…” for their song “Bridge Over Troubled Waters.”

There is a good chance they were struggling with writer’s block as well, and used their feelings of frustration to write the song.  Emotions, as we’ve mentioned, is a powerful source of creativity if you use them instead of fighting against them.

You can’t change things that happen in your life, but you can change your mindset and emotions about the situation. Whether an angry, sad or moody moment, channel your mindset into positivity and use that energy to churn out good work.

Search your feelings, and use the ‘force’ to dislodge your writer’s block.

There is no one sure way to get around writer’s block for songwriters.

What we have shared, are just a few of the techniques used by some successful songwriters in their time. You may find some to work for you and some will not.

But the only way to find out is to try them.